Can you identify this black sauce from this Kuala lumpur claypot chicken vendor?

There's this world famous claypot chicken vendor at Kuala lumpur who cooked chicken and rice in a claypot over charcoal.

In this video you can see him using a black sauce. www.TinyURL.com/KLclaypot

Assuming that it's a generic sauce of asian cuisine, can you help me identify it? I want to know what particularly attributes to it's lustre!

Looking at the video, I would say he's using a variety of soy sauces, with one or more being a dark or black variety.

Traditionally, the cooking is done over a charcoal stove, giving the dish a distinctive flavour. Some places serve it with dark soya sauce and also dried salted fish.

Also from Wikipedia, a picture of the dish with dark soya added: 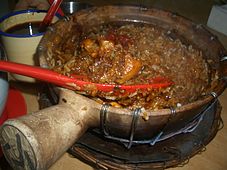 Update as per the edit to the question:

Dark and black soy sauces tend to have a thicker consistency than 'regular, everyday' soy sauces. (And some are sweetened.) The viscosity allows the sauce to adhere to foods more easily and creates what I refer to as a lovely sheen.

Dark and Double Dark: Like Japanese dark soys, Chinese "dark" soys are darker in color and thicker in texture, but tend to be lighter in saltiness. They are generally fermented for a longer period of time than their thin counterparts and often have added sugar or molasses, giving them a sweet-salty flavor and viscous texture. They are used solely for cooking, often added at the last stages to season and add color to sauces.

Not the answer you're looking for? Browse other questions tagged asian-cuisine or ask your own question.

1
How can I tell if soy sauce is of good quality?
6
Can someone identify this food?
6
Is this chicken safe? silkie chicken edition
1
How can I cut the flavour of Worcestershire sauce in a completed Asian dish?
3
Can adding too much sauce and ingredients to fried rice make it too salty?
22
How to make thick Asian sauces?
3
What is this Burmese/Myanmmarese Brown to Black dried tea leafs?