Did I underbake my bread?

I tried making bread today, and overall, I enjoyed it!

However, there seems to be something weird going on. Right between the crust and the basic white section of the bread, there's a line of dense bread that is a little bit darker. It does not seem to taste too different (although I did not rigorously taste test it/I don't have much experience with bread).

Image of the bread. What I'm referencing above is the strip of dough that seems more dough like than bread like. 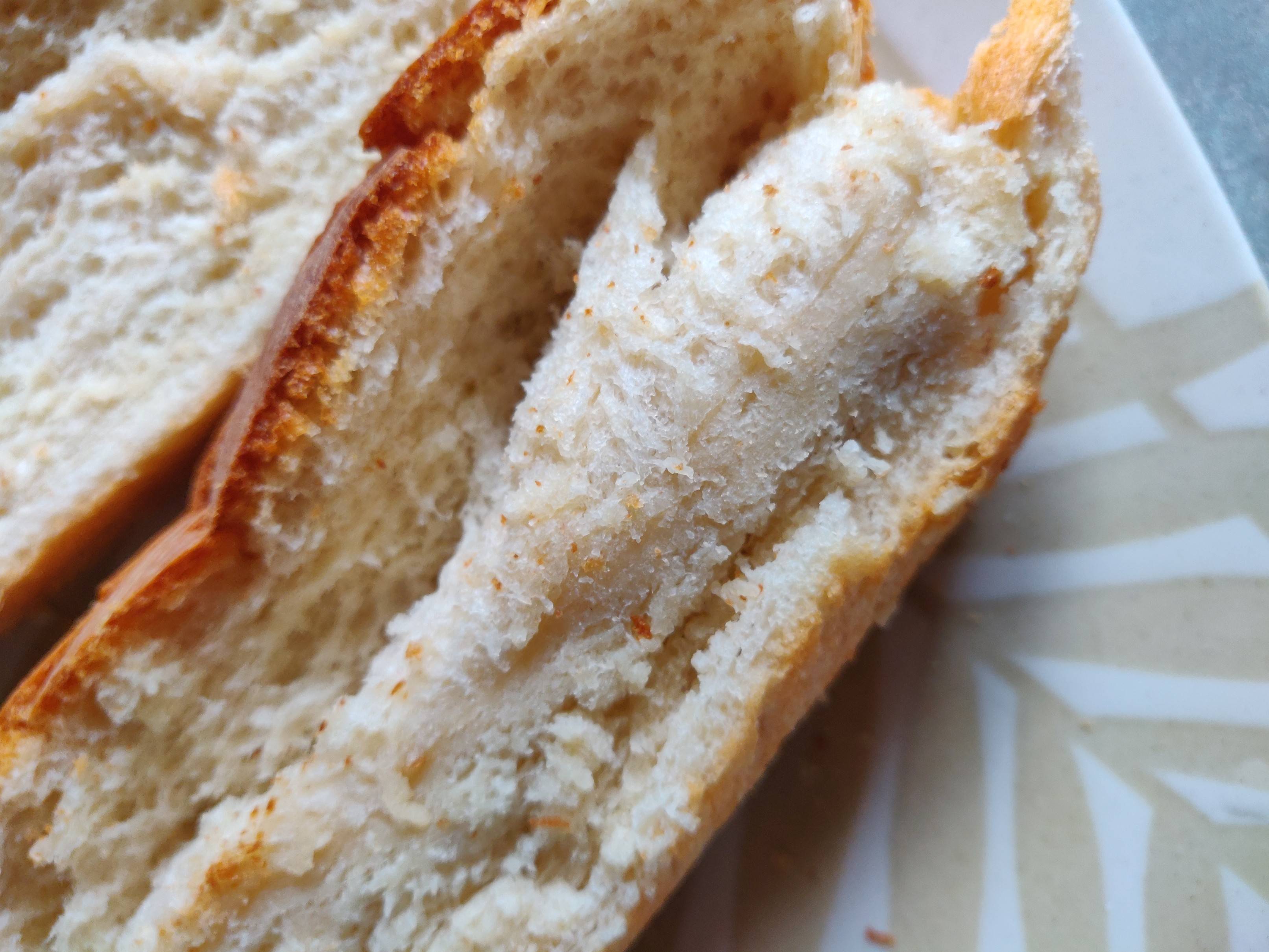 Another thing I did not like as much was how dense the bread felt overall.

Are these signs of undercooking my bread?

Notes: I accidentally doubled the amount of yeast, and I used all purpose instead of bread. Not sure if those would play a difference, but wanted to include them. One thing that I did notice is a relatively strong scent of yeast when it first came out of the oven (although the bread had no taste of it at all). Would that indicate over-leavening as some commenters suggested?

Here is the recipe I used: https://www.tasteofhome.com/recipes/basic-homemade-bread/. I halved the recipe, except for yeast like I mentioned above. The smoosh factor is most likely me slicing when it was hot (I really wanted to taste it fresh out of the oven).

This question is a bit hard to answer because there are just so many variables. Let's do some troubleshooting.

There are two ways I could see your problem: badly proofed bread or underbaked bread. It's fairly easy to tell which.

When your bread is rising it should double in volume. If it doesn't rise enough then your bread will be dense and won't blow up with stream as it bakes. This will result in a loaf that is doughy much as you described. If the dough rises too much the protein bubbles can tear and the bread will fall. The dough will be limp and the bread will come out similarly to it being under proofed.

If your bread is under baked it will go into the oven puffy and full. It will puff up with steam but the proteins won't be set. It might fall as it cools or just be a bit mushy inside when you cut it. Especially when just learning to bake bread, it's helpful to take your bread's temperature with a probe thermometer while it is baking. When the bread is done the interior temperature will be just barely under the boiling point of water at your altitude.

You said you doubled the yeast and used AP flour instead of bread flour. Doubling the yeast doesn't guarantee failed bread, it will speed up the rise time and change the flavor to be more yeasty but less complex. Using lower protein flour will make the bread more dense and less able to hold bubbles.

This would imply to me that your bread over proofed but without pictures of the dough it's impossible to say for sure.

When bread comes out of the oven, even when it baked completely, the starches aren't set. The bread needs to cool, out of a bread pan, for steam to escape and starches to set. If the bread is sliced before this happens then the interior of the loaf will a gummy mess. While this could also be the cause of your issues, you'd notice as the texture would be noticably improved when you slice again after the loaf has cooled.

I suspect your bread may have suffered from a combination of these problems.

Don't be discouraged! It doesn't take that much practice to be able to recognize how the dough should look and behave at each stage.

6
Why didn't my brioche rise?
3
Why does my bread have a dip in the center?
3
Chewy, Moist & Bit Uncooked Bread
6
Bread dough. Rookie questions
5
Issue getting Atta bread right
2
Question about safety of eating cooked bread if it is over or under-proofed
1
Brioche bread texture
2
Preparing To Teach Someone How to Bake a Whole Wheat Yeast Bread