Why is my cake rising sideways while baking? 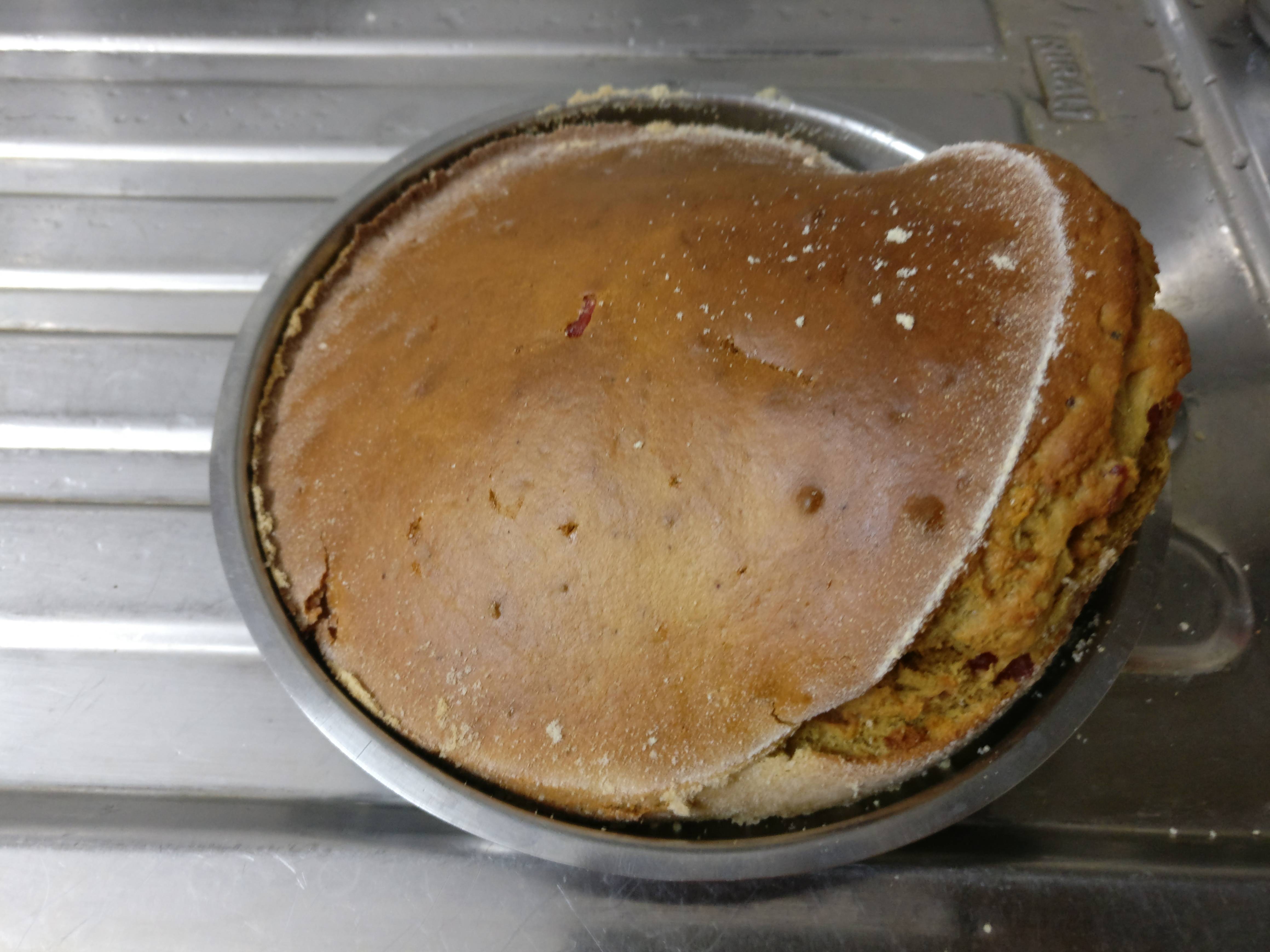 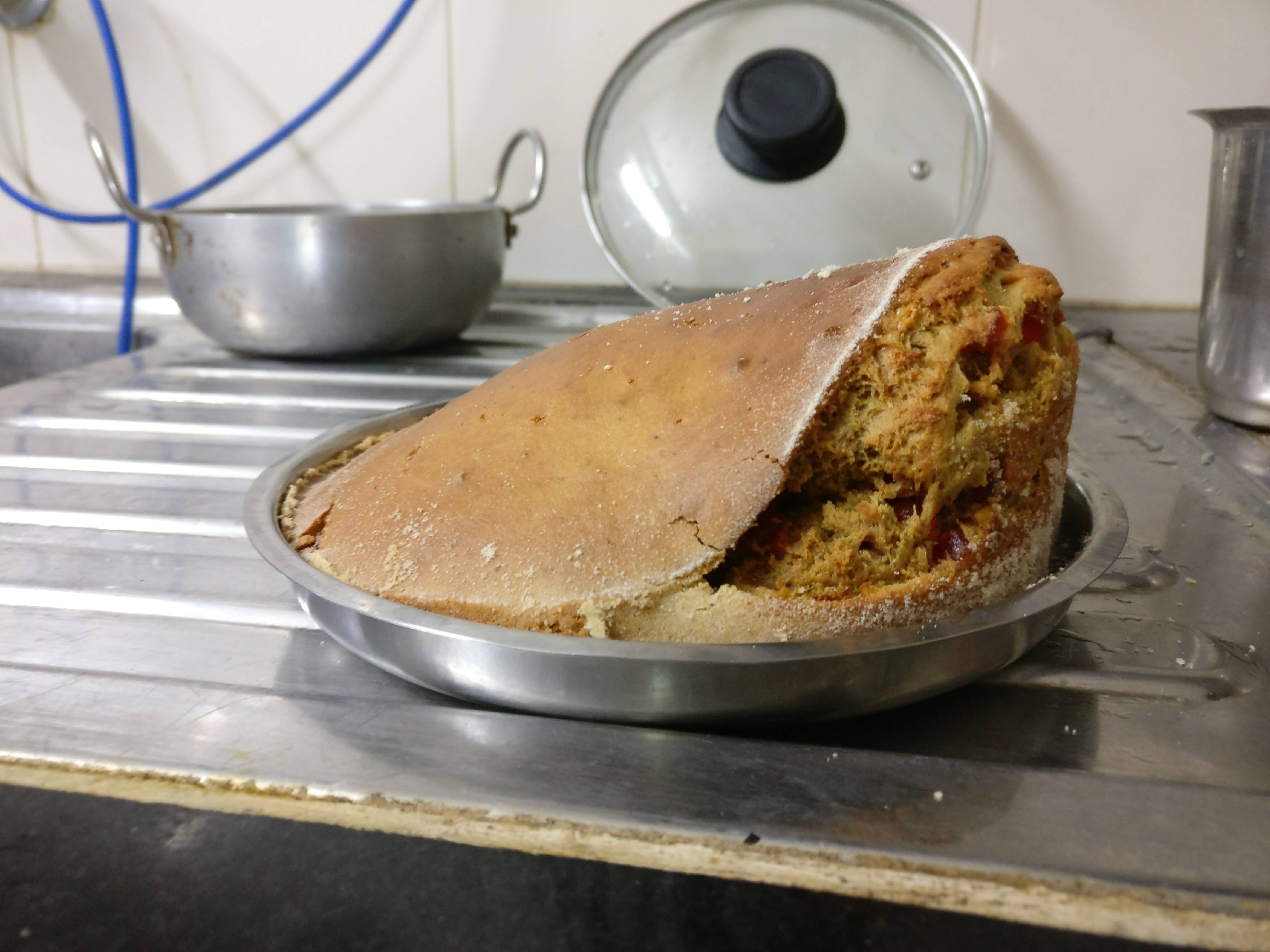 I'm using the following ingredients to make the cake:

I've noticed that the cake tastes good but it tends to rise sideways.

I'm not sure what's causing that but from the look of it it seems that the uppermost layer formed a crust that wouldn't move and the insides had to forcefully burst out because the crust was so tight. Not positive here though. I'm following everything that's written in common recipes.

Edit: Since everyone is commenting on the oven, I used an Air Fryer actually at 160 degree Celsius (which is supposed to be the recommended temperature for baking the cake).

Edit2: Observations on the way the cake has burst through sideways.

The way it has risen - it's as if the top part solidified and formed a thick crust. The structure in the middle tried it's best to rise up but the top crust didn't allow the rising up nor did it allow bursting. The middle part had no choice but to keep pushing until one edge of it gave way. I find it strange that the top crust didn't burst anywhere. Rather the side burst and the middle part leaked out from there. The top is so strong that in spite of the sideburst it still retains its shape. Makes me feel like the top is "suffocating" the middle.

In fact, when I take out a slice I see that the top layer is so strong that it gets easily separated like it were a cloth piece. The middle part is squishy kinds.

The structure of the cake makes me feel like something is wrong with the ingredients due to which the top formed such a strong crust. Could it be something to do with fat in the milk? This reminds me of the time when milk is boiled and the round layer of fat is formed at the top. As the milk boils it doesn't allow the bubbles to escape and starts "suffocating" the liquid underneath instead of bursting.

Perhaps we need to use skimmed milk for the cake? Also, I didn't use any water at all. Only milk. Could it be that I need to use 50% water + 50% milk so that the top crust isn't so strong and it becomes more "burstable". That way the middle structure can jump out from whichever direction it wants? Perhaps that would make the bursts happen in different areas and create a more "normal" cake. Or am I wrong here?

A cake baking uneven to that degree makes me thing the heat source is really uneven. One side of the oven is hot, the other is much cooler. I've seen a fan oven cause some uneven baking before but never to that degree.

EDIT: It's come to light that an air fryer was used to bake the cake. Air fryers come in several types, but they all work on the principle of blowing very hot air over food inside. This hot air comes from a vent, so the reason the cake is so uneven is that the side right by the vent is getting a blast of hot air while the other is relatively cool. I would suggest putting a piece of aluminum foil between the pan and the vent to deflect the blast of hot air and force it to circulate. Be sure not to block the vent though, you don't want to overheat the machine!

Turning the cake is one option, although it could cause the cake to lose lift and collapse. I would try foil first and then try turning if you still get a very uneven result.

I agree with GdD's answer but will add that your oven might not be level. If you have an oven that is not level you wont notice when roasting food but is a nightmare for baking.

The asymmetry of the rise can only be explained by the asymmetry of the heat source, as explained in GdD's answer. However, you commented that you didn't think that answer explained why the crust on the top was so strong, and wondered whether the recipe was wrong or the ingredients were bad.

I think that the heat source of your particular "oven" explains this too. It's always the case with baking that the outside is heated differently to the inside: it's heated primarily by conduction from either the pan or the air, and maybe to some extent by direct radiated heat from the element. The inside is heated by conduction through the cake mix. As I understand your air fryer, hot air is being blown directly across the top of the cake, so the top is being cooked much faster than the rest, and I'm pretty sure that's why it forms such a strong crust.

If you can turn the temperature down, the top should cook slower. GdD's suggestion of trying to redirect the air would also help to even things out so that it cooks from the sides and bottom about as fast as from the top.

If you can't find a solution which works with the air fryer, an even more extreme option would be to forget baking altogether and steam it instead. It doesn't work for all cakes, but yours looks like a sponge and steaming sponges is nothing new.

48
How do you make a cake lift equally and minimize doming?

1
Why is my pumpkin pie filling separating from my cake mix?
4
Why didn't my beer cake cook properly?
16
What is the science behind Magic Cake?
7
Why did my Chiffon Cake collapse?
3
Why is the butter gradually melting and only the top of my butter cake done?
1
cake smells bad of egg, is dense and rubbery
5
Why is gluten-free baking possible?
5
Chocolate cake baked from recipe is too delicate/fragile