What is the value of the "Texas Crutch"?

In US barbecue tradition, the so-called Texas Crutch is the act of wrapping large cuts of meat like beef brisket or pork shoulder in aluminum foil or butchers' paper during the smoking process.

What is the value of the Texas Crutch? When should it be done? Are there negative effects?

The primary benefit of crutching a large piece of meat on the smoker is to reduce evaporative cooling.

What is Evaporative Cooling?

When water is heated, it evaporates into vapor that we call steam. The state change from liquid water to gaseous steam is an endothermic process. That means that energy is consumed—as opposed to exothermic processes whereby energy is released.

Evaporative cooling is the effect that this state change has on the meat itself. Liquid steaming off of the meat has a net effect of cooling the meat. This is the same process the human body uses to cool us down in warm weather. We produce sweat which then evaporates, thus cooling our body.

When cooking a big cut of meat it is not uncommon to lose a quarter or more of the weight from the time it hits the smoker to the time you are ready to eat. Most of that lost weight is water.

When a piece of meat reaches the temperature required for the surface to begin steaming aggressively, the evaporative cooling effect becomes significant enough to halt or significantly slow the overall warming trend of the meat.

In barbecue parlance, this is called "The Stall." The stall can last several hours. By the nature of the variables at play, this stall often happens in what is essentially unproductive time on the smoker. Meaning, the meat is not yet hot enough to be fully into the process of breaking down tough connective tissues, and it's already past the point where it is gaining significant flavor from the smoke. Essentially, it is just sitting there. Using up fuel and time.

Depending on your goals, you may also want that moisture to be inside your meat. 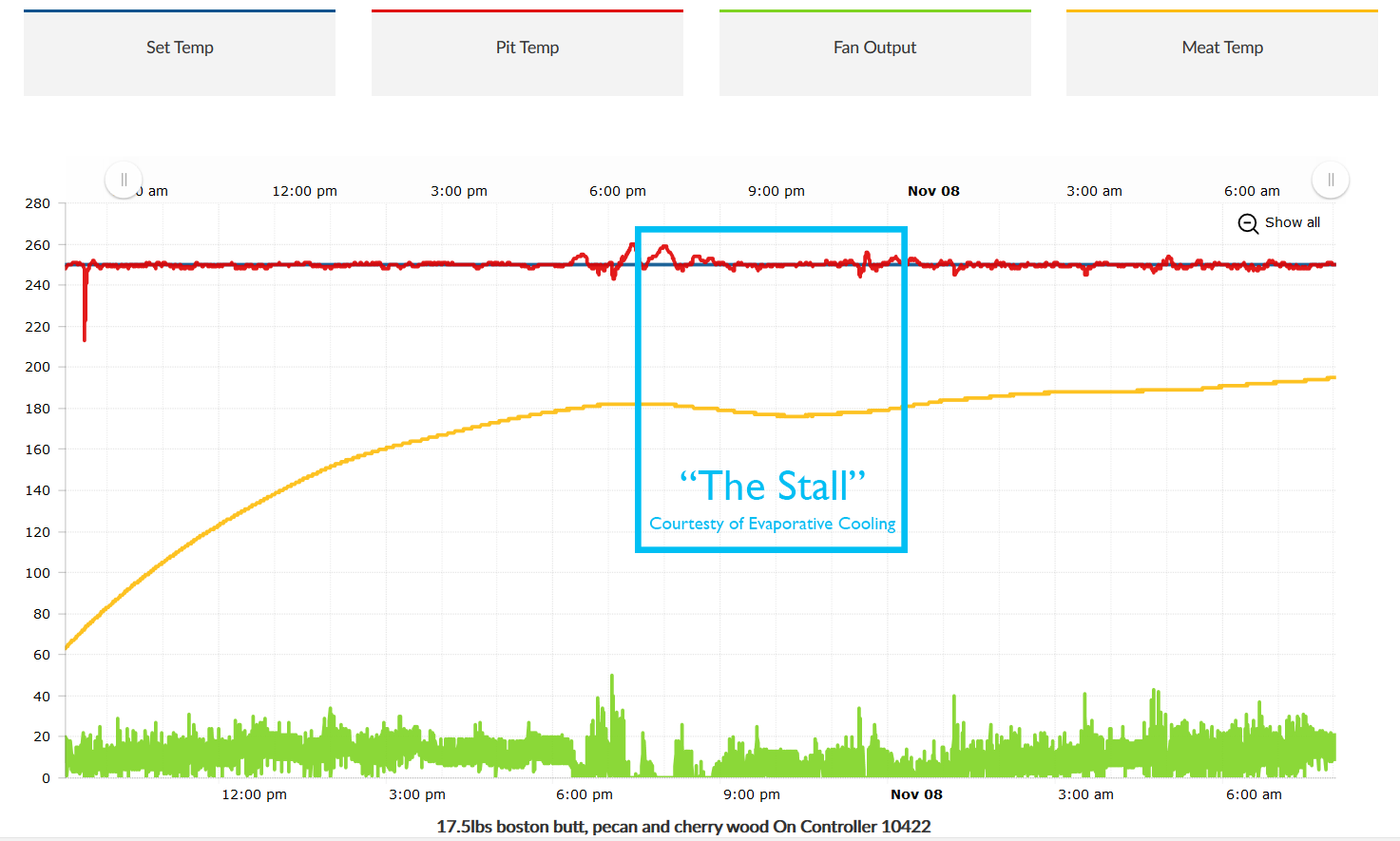 In this graph you can see that the internal temperature of the meat actually dropped during the stall, in spite of the temperature in the smoker itself remaining consistent. It took about 5 hours to regain the heat lost to the stall. This graph was generated by a smoker temperature controller, emphasis mine. One could argue that the stall begins earlier than indicated. There exist more cut-and-dry examples, but I chose this one because of the significant internal temperature dip shown.

What is the value of the Texas Crutch?

In short, it saves time and fuel. Wrapping the meat reduces the evaporative cooling effect so you waste less time in the stall. You're essentially braising the meat in your humidity-controlled environment within the wrap. The steam cannot escape, so the cooling effect is reduced.

Wrapping your meat to power through the stall will soften the bark (the highly desirable seasoned crust that this food is famous for). When you do or do not crutch is completely dependent on 1) how much time you have to perform your cook and 2) the goal end state of your food. If you're smoking a pork butt, for example, and you plan to pull the meat and mix it up with sauce to make sandwiches, the state of your bark may not be very important to you.

Personally, I am a "bark guy" so I usually make sacrifices in favor of maintaining it. I want shards of chewy bark to contrast the tender texture of the rest of the meat. This usually means giving myself extra time. This is sometimes a more reasonable goal at home than it is in a commercial or competitive environment.

Note that the general principles at work here apply to roasting in an oven as well. Some smokers are indeed very similar to ovens.

Not the answer you're looking for? Browse other questions tagged barbecue smoking or ask your own question.

8
How do I prevent smoked brisket from being chewy?
6
Smoked a brisket that was edible but not great. What would you do differently?
1
When smoking ribs what is the 3-2-1 or the 3-2-2 method refer to?

7
How do you handle the fires caused by adding wood chips to coal?
2
What cooking/grilling applications are more suitable for smokers than standard BBQ's?
5
Why do brisket recipes move to the oven to finish?
1
What temperature range is suitable for grill smoking?
4
What do I need to get started with American style Barbecue?
6
Smoked a brisket that was edible but not great. What would you do differently?
9
What is the source of smoky flavor for barbecued foods?
2
Flavour-wise, what is the use of an electric/gas BBQ?
3
What can I do to make wood dust for cold smoking?
7
How long to cook a 150 lb. pig in the ground?