What kind of teaspoon is this?

I have a cutlery set that came with 7 teaspoons. Six of them are the same, but one is different. In the following image I have three of the six on the left side of the picture and the different one on the right. 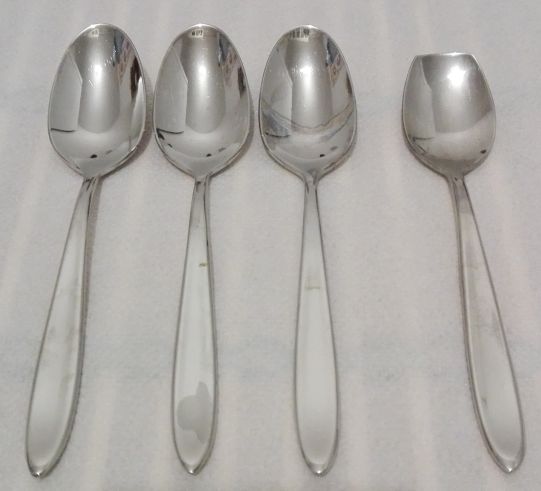 Unfortunately I don't have the box the set came in, but on the back of all the cutlery it says "justinus edelstahl 18-10". I was unable to find information online about what teaspoon that is.

What is the one on the right used for? Why does it have a flat tip? And why was there only one in the set?

The set was for 6 people, so I have 6 spoons, 6 knifes, 6 forks, 6 little forks, 6 (normal) teaspoons, a few other things, and this strange teaspoon. It had its own special place in the set, so it is not a defect. And it doesn't look cut or chopped or smoothed. It was created like that. It definitely had its purpose.

Like dlb suggested it is a spoon for sugar. At least in Germany this type of spoon is not uncommon with sets of cuttlery.

For an impression of various forms of spoons check a picture search. I searched for "Zuckerlöffel" (German for sugar spoon) and found a wide range of different forms.

As for the specific form I don't think there is a special reason other for having a different looking spoon that fits the design of the cutlery set.

Historically sugar spoons where of a complete different design than your everyday cutlery as sugar was quite expensive and not used everyday. There are even examples of sugar pots that have small locks on them so that the servants weren't able to nick some sugar if laying the table.

it used for eating ice cream.. as in India in most of the ice cream parlor you will get this spoon.. it is easy to eat

It's a jelly/jam spoon, according to a site that explains antique flatware.

5
Nonstick pans blistering after dishwasher?
8
Induction unit makes buzzing sound
3
How do I know if a frying pan is suitable for a glass ceramic cooker?
7
Why does my Wonder Pot now bake unevenly?
7
Is there any way to salvage an old rusted wok?
4
What Kind of Pan is This?
4
What kind of nonstick coating is this?
9
Does anyone know what kind of pan this is?
3
What kind of cooking knife is this?
1
Why this cooking pot not working on my Induction?