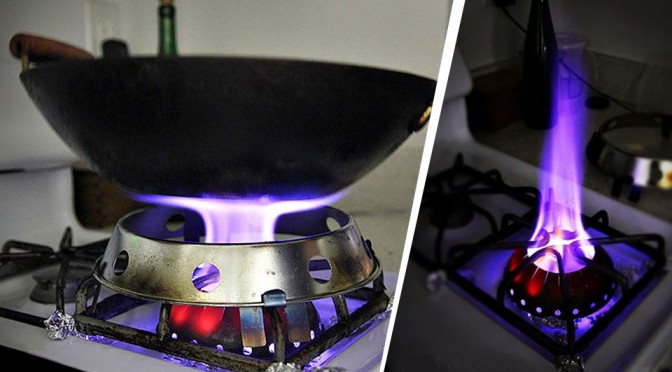 I have wokked on Induction cook tops. Because they are so effective at transferring heat it works quite well! But there are a few things to consider:
1. you need a flat bottomed wok, which means it is slightly harder to stir
2. You cannot lift the wok above the cooktop which means you can not "flip" the
food.

So you have to manually stir.

And you can't just calculate the kW to BTU, because induction cooktops heat the pan directly the per-watt efficincy is much higher. In my experience a domestic induction cooktop at full power (2000watt ish) is better than a domestic wok burner but not nearly as hot as a specialized wok burner.

The above answers evidently assume that induction stoves are all flat and thus require a flat vessel, which obviously excludes classic Chinese round bottom woks.

It just may be that the authors have never heard of specialized concave-surface induction tops intended for use with round bottom carbon steel woks. And I would expect they work fairly well as they are mostly produced in China both for prosumer and professional market i.d for the wok conscious Chinese cook.

The prosumer output would be in the 3500 watts range and it is well known that such power will be rather more than what you can get from a better gas range while the professional versions usually come as 5000 watts, 6000 watts and something like 8000 watts. Temperatures of 500 F or more will be easily reached at 3500 watts, so I'd expect the higher outputs be able to quickly sear even greater portions of food at one time.

Power is definitely not a problem, however, I'm not sure if wok shaking like on a gas stove is possible. Maybe somebody here could comment on this. Also, I don't think flaming is possible other than oil in the wok getting igniting simply because of the wok reaching the self-ignition temperature.

This may be a matter of semantics, but my understanding of wok hay is that it is the "energy" (perceived when the food is eaten) captured by cooking food on a well-seasoned wok at a very high temperature. Therefore, it is a combination between a well-cared for wok, and the heat source. The concept and effect is rather elusive, and probably difficult to replicate on a home stove because of the lower power output than restaurant equipment. Further, because an electric or induction cook top only heats the bottom surface (as pointed out above), you would be at a further disadvantage. So, I would go for gas, and use the burner with the highest output, but also keeping in mind that the wok itself is a significant factor in this concept.

Not the answer you're looking for? Browse other questions tagged chinese-cuisine or ask your own question.

7
How can I cook my dumplings without a bamboo steamer?
2
Chow Mein: What is the starchy sauce called and how can I cook it?
1
What's the minimal set of cookware for Chinese, Japanese foods on an electric induction cook-top?