TL:DR; My third attempt at making dutch oven bread from scratch still tastes like flour, although a little less so than previous attempts. Why?

My first attempt I tried this recipe by Tasty. I followed it fairly diligently but found that my dough was way too wet. I probably ended up adding about a half cup more flour total trying to get the texture to seem right. The bread looked fantastic, had a great crunch and gluten development, and tasted disgustingly of flour. It was okay toasted and smothered in garlic so we struggled through it, but it really didn't taste good. I figured the issue was the flour to wet ingredient ratio so I tried a different recipe.

Pic of attempt one: 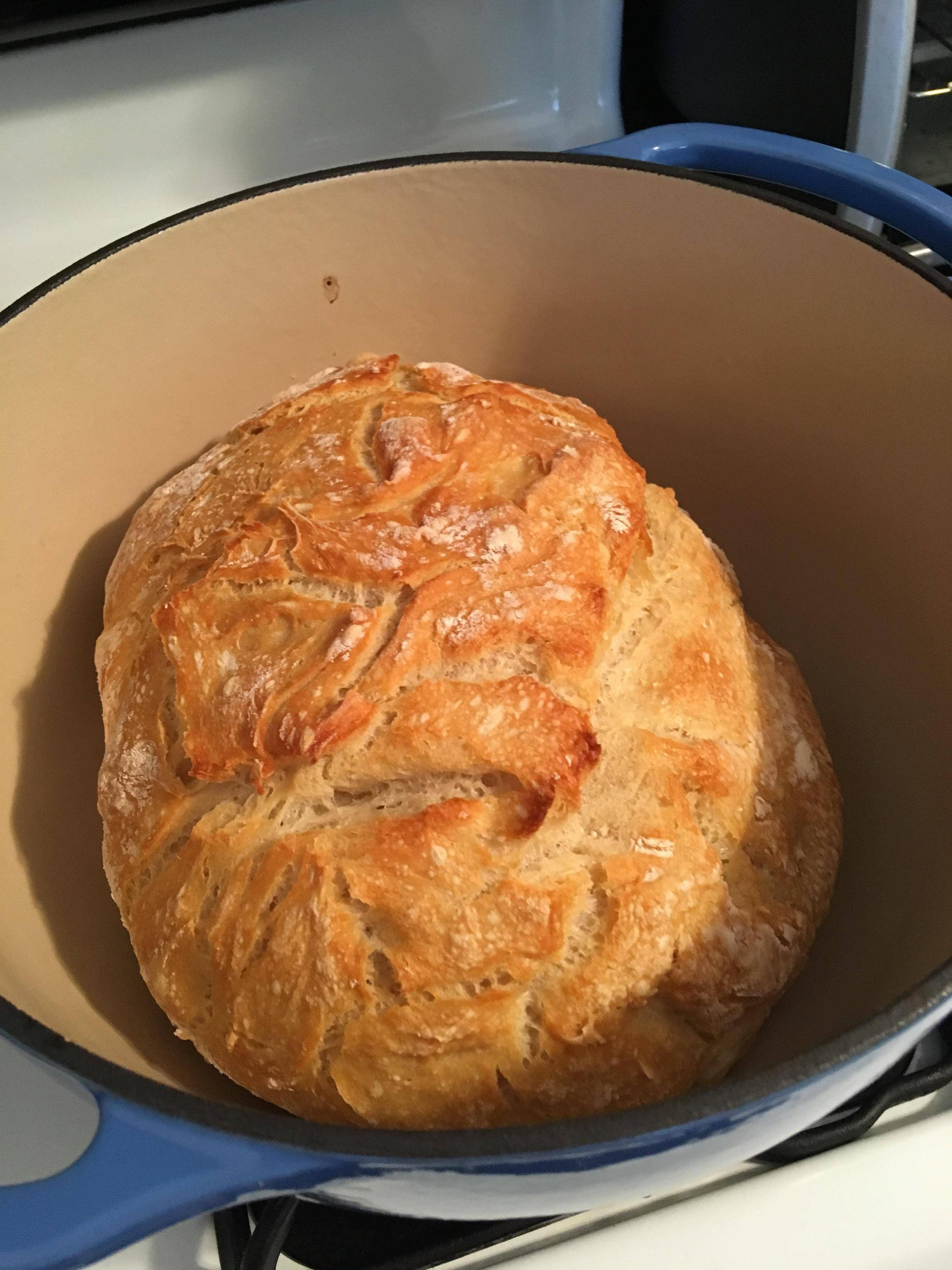 Round two was this guy. I again followed the measurements precisely, although learning from the tasty recipe I preheated my dutch oven with the oven itself, and put the dough straight in once it had come up to temperature. Although the dough was a better texture while working with it, the flavor was even worse this time - we threw it straight in the trash.

Round three I went with the same recipe from #2, but this time I tried bread flour instead of all-purpose. I also kneaded a bit more than last time. The outcome was, once again, a good looking loaf, but although it's less flour-tasting it's still not good by any standards. It's also lost a bit of the nice crunchy shell from the first try - it just feels hard now, rather than crisp. I think I cut it open too early which is why the inside is a bit sticky looking, that's my bad. 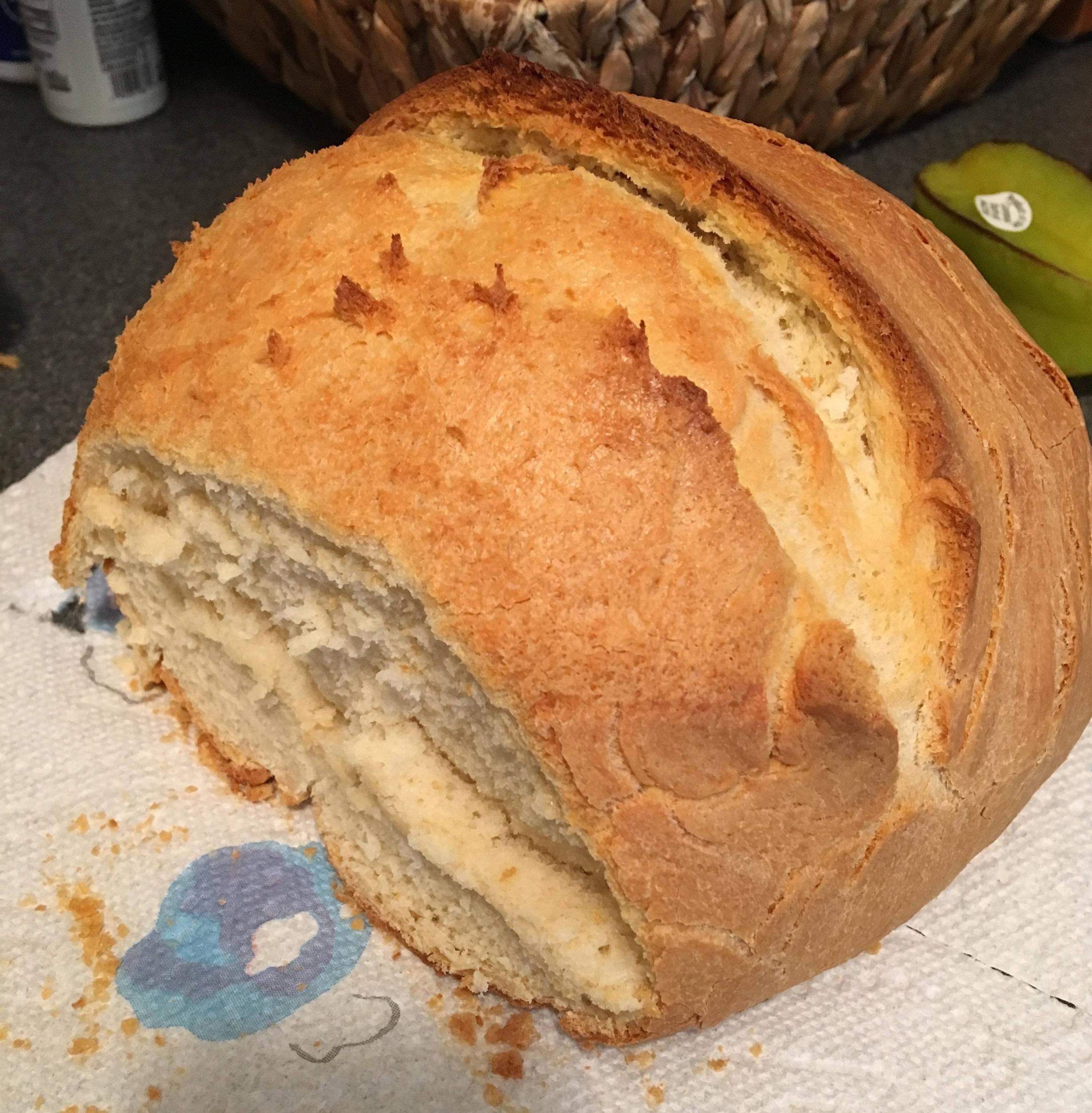 I will say my method of proofing is a bit unorthodox - I basically cocoon the bowl with the dough in it inside a nest of blankets with a heading pad. It's winter here in New England USA and getting the dough to rise is nearly impossible in ambient temperatures. I haven't seen any weird cooked textures developing at the bottom of the bowl so I don't think it's an issue of proofing temp, but I can't be sure. The rising seems to loosely match the suggested sizes/timing as in the recipes so to my untrained eye all seems good there.

My other outstanding theory is maybe the taste is due to kneading - I've tended to knead less than the recipe calls for because I get a nice, smooth, elastic ball in only about 2 minutes of kneading instead of 5. Could under-kneading cause problems?

Am I missing anything? It's getting expensive to throw all these loaves in the trash - I need to see improvements soon or my mom's going to stop letting me try!

Your photos each look like decent early attempts at bread making. I would encourage you to keep at it. While I think your process will improve (for example, you probably want to improve gluten development with further kneading or stretch and folds), nothing about your process would impact the flavor to the point of making it "unusual."

I would make two observations. First, you might want to take the temperature of your bread, at the center, near the end of the bake time. Just to make sure you are cooking it completely. It should be 190 - 200 F (88 - 93C). I usually bake darker. If I am using a dutch oven, I will remove the top at about the halfway point, leaving the pan and bread in the oven. I just like the flavor of a darker crust.

Second, the breads that you mention in your comment are typically made with a starter, or are enriched breads. These breads will have a different (and perhaps more enjoyable to you) flavor profile. You appear to have some of the basic technique down, maybe you want to experiment with a sourdough starter and a formula that uses a combination of flours, and allows for more flavor development. It will take more time, but the flavor will be noticeably different.

By the way, you can always make croutons or breadcrumbs with the loaves you don't enjoy.

I've used essentially the same recipe as you found on Tasty for at least 15 years (I started with the Jim Lahey recipe). From the 4 c.:2 c. flour-water ratio, it's a standard “no-knead” recipe. It's a wet enough dough that the bubbling action during the rise develops the gluten. I mix mine with a spoon. After the first rise, I stir it again gently a couple of times - you need a strong spoon - to distribute the gas bubbles, but not knead them out. It's tough to stir, but definitely too wet to knead effectively by hand. I'd say that's why it seemed wet to you. I never take mine out of the bowl. When the oven’s hot, I just scoop/pour it directly into the Dutch oven. Whatever it looks like going in, it finds its shape (a boule) in the oven.

The one big difference in the no-knead method, though, is the rise time. The original recipe calls for 16 hrs on the first rise, 2 hrs on the second. (For about 10 min of actual work, I don't mind the wait.) The long rise develops a nice yeasty flavor, as well as develops gluten - but I can't say if the short rise would be responsible for the raw flour flavor. I’ve never needed extra heat, even in a 65 deg house in the winter. It's always a very fluffy dough when it goes into the oven.

From your picture, it looks like there wasn't much oven spring. I use an 8 qt cast iron Dutch oven, and the baked loaf reaches the sides easily. Perhaps you're getting crusting too soon - is the lid tight? The moisture trapped under the lid slows crusting so the loaf rises more in the heat. Maybe a little more water in the dough would help. Also being gentle with it, to retain as much of the CO2 as possible. Perhaps if you can get a less dense loaf, it will cook more evenly and will cook out the raw flour flavor.

3
Why does my bread have a dip in the center?
2
Making whole wheat bread in a bread machine? What kind of flour?
2
Why is my bread dough sticky?
3
Is it okay to mix bread flour and all-purpose flour when making a pizza dough?
7
Why is my bread falling flat?
0
Why is my white bread with poolish dough very loose?
0
Sourdough dough collapsed, not rising again... Need help!
9
Why is my baguette type bread coming out almost flat?
0
Does bread flour (vs AP flour) make a big difference in the density of the dough?
0
Why are my tangzhong bread doughs so wet?