How to not make my macarons rip? [duplicate]

I just made a batch of macarons. This is my third total batch of them, and they become increasingly better - alas compared to my previous batch, these don't show much if any improvement even though I've changed how much I mix the macaron mass and how I pipe them.

~150g egg-whites
~70g finest sugar (not powdered!)
Mix with an older Kenwood chef until stiff and glossy
1 very flat teaspoon of vanilla extract (so about half a deep spoon)
~3g of powdered green food coloring
More mixing with the Kenwood until well mixed, still stiff and glossy

The first tray went into the oven as soon as the latter hit 150C: 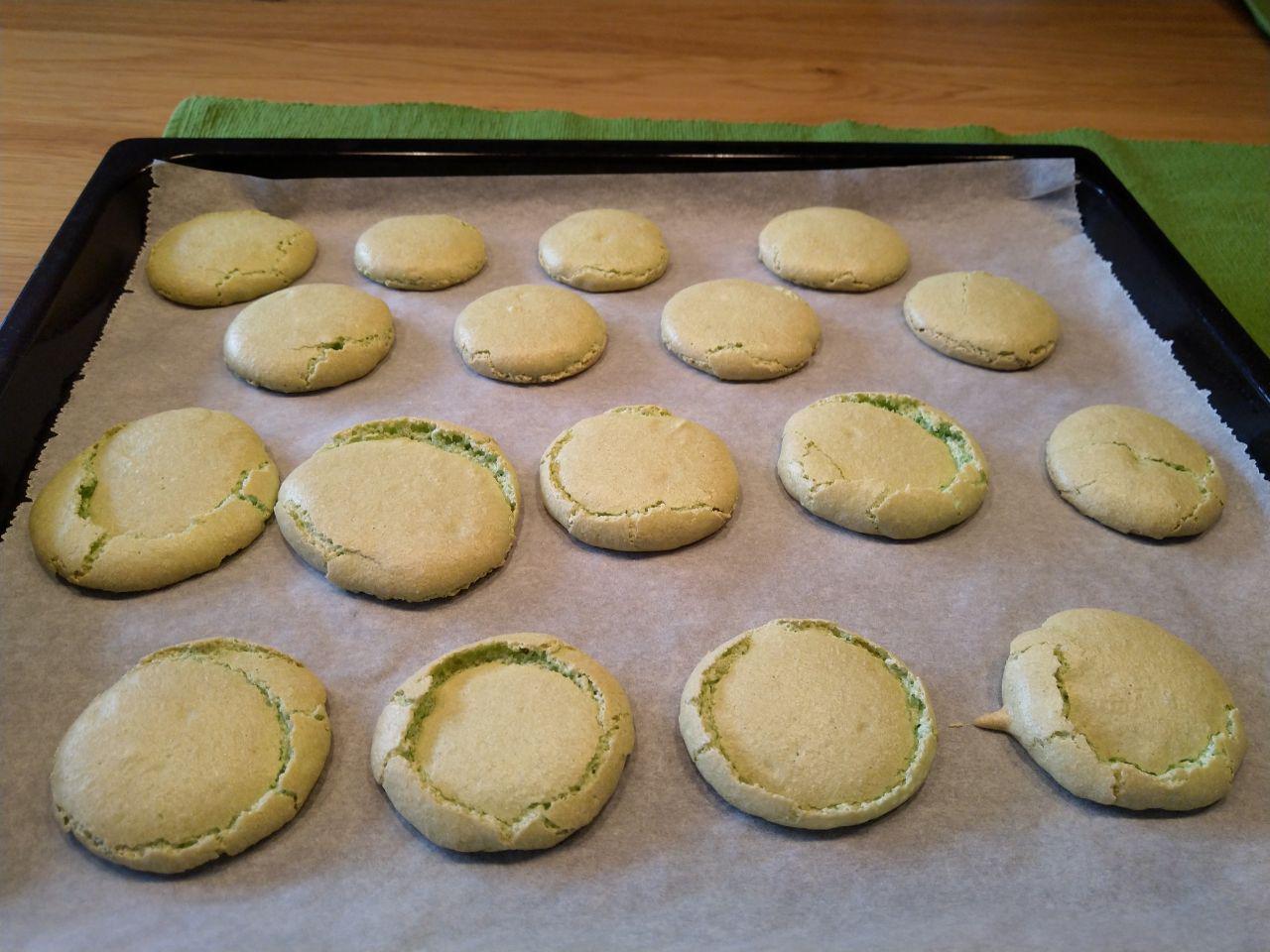 The second tray had to wait for some ~20min while the other baked, during that time I rapped it a few times more but mostly let it sit: 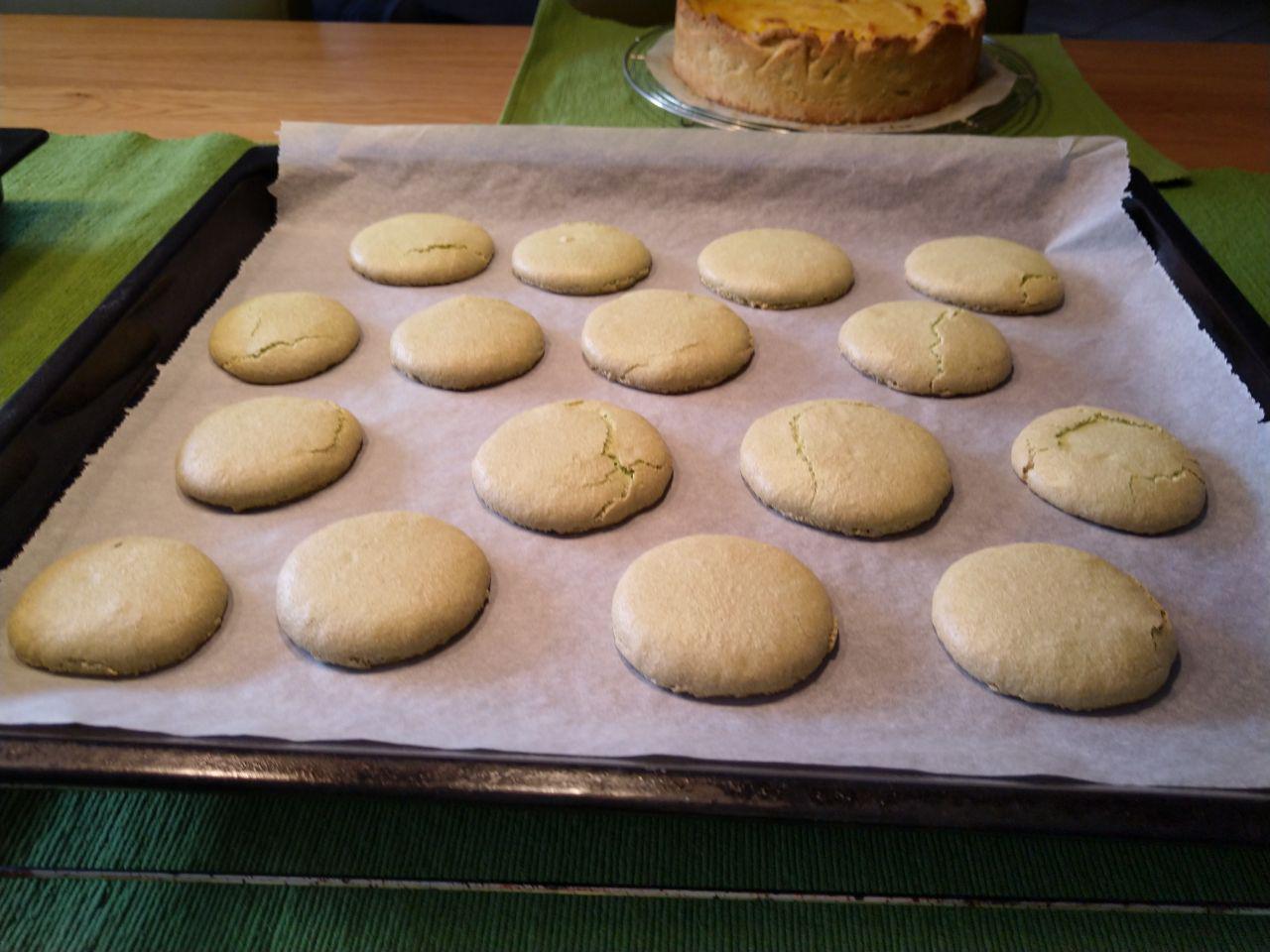 What can I do to prevent my macarons cracking / how to change my recipe and/or process?

I see that there are positive results by letting them sit for more time, so I'm thinking about letting them sit ~1 hour next time I make a batch, and def rap them every 15min or so. What other changes/improvements should I make to my recipe?

1what's that called in english? I call it "Mittlere Backofenrille" in German

Also, I notice that while your second batch is much less cracked, it still is not well risen. I believe your problem may be oven temperature and heat circulation, and you can confirm this by watching your macarons in the oven. I don't know a silver bullet solution, but I am putting some more analysis below, which I hope is still helpful.

For comparison, a well risen macaron has a "belt": 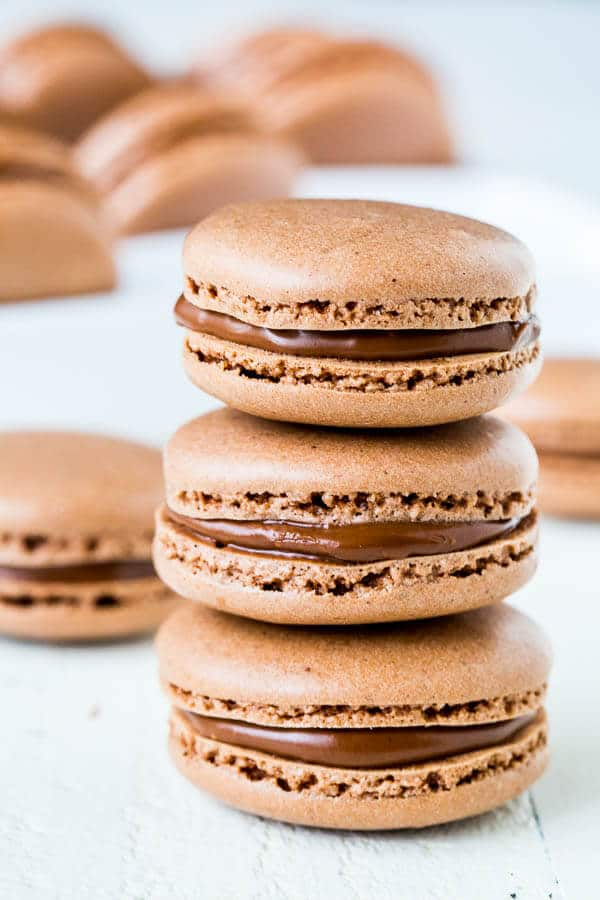 This belt is essentially a crack of its own, and the difference between belted macarons and yours would be the stage of cooking when the crack forms.

In either case, the shape of your macarons is controlled by the release of moisture as steam.

First, the heat of the oven will crisp the outside shell of the macaron. As it cooks from the outside in, moisture in the batter will start to evaporate. The meringue traps air in little pockets, and the steam expands in these pockets, ideally so that the shell will nicely and uniformly rise until a belt opens up to release the steam. A similar process happens when baking bread, and this is why bread bakers will cut slits on top of their loaves.

When bringing the macarons back down to room temperature, the steam contracts again. Typically, cracks on the top of macarons (also choux pastries) occur when temperature changes too quickly. The pressure inside will suck in the outer shell and cause it to collapse.

Is it possible that you took your first batch directly out of the oven (possibly into chilly air)?

I believe that rapping the baking sheet helps break any especially large air pockets, to help keep the rise uniform. But you would want to do this as little as possible, to avoid deflating the smaller air pockets in the merengue.

Based on my understanding, I have the following recommendations:

Watch your macarons while baking. Does the belt form midway through baking, or never at all?

Lastly, I have an extra comment for the second bullet point – I noticed that the crusts of your merengue are a light brown, while the insides are a light green. Your outside is browning and your merengues are possibly overbaked. Try either reducing the bake time by a few minutes, or putting aluminum foil over the merengues to stop the browning of the outsides.

If you do the aluminum foil trick, be extremely careful to place your foil in the oven very quickly. Before they're finished baking, the macarons are especially sensitive to temperature drops, so you can't let in too much cold outside air.

Not the answer you're looking for? Browse other questions tagged baking macarons or ask your own question.

7
Troubleshooting a soufflé that collapses during baking
9
How can I make the tops of my macarons smooth?
4
Can I whisk macaron batter like meringue?
6
Why would a recipe call for pouring boiling butter into egg-whites?
6
How to make my meringues less sticky?
3
Why do my macarons come out looking weird?
11
Why are my macarons cracking on top?
4
Lace cookies TOO thin?
1
Why do French macarons need two types of sugar?
4
Folding dry ingredients into the cake batter: at once or in 2/3 portions, does it make a difference?