What can I add to soften too hard peanut butter ice cream?

My staff is having a hard time scooping our Peanut Butter Ice cream. It's too rock hard. We make the Ice cream in-house using a 15% Super Premium base. I want to know what can I add to soften the ice Cream.

Here is the Recipe:

dessert ice-cream peanut-butter
Share
Improve this question
edited May 4, 2021 at 1:00 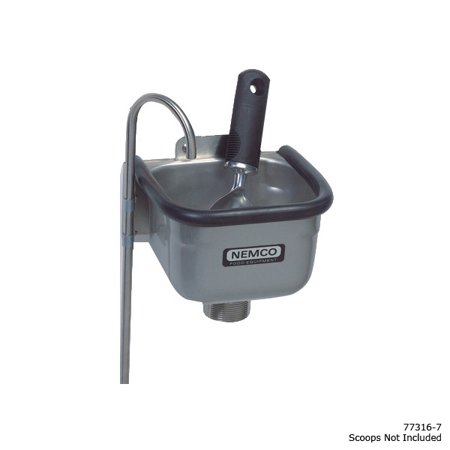 If you are serving lots of ice cream maybe you already have one of these. If not it might come in handy. The flowing water warms up the scoop which then more easily cuts its way thru the hard ice cream.

Sugar or alcohol make IC softer. On denser flavors like dark chocolate and PB, we use 1/3 C vodka to 3 Gallons IC. Sugar works too but if you do not want to add sweetness - vodka is the trick.

Let it sit and partially melt, until it is soft enough. That should solve your problem! As pointed out in comments, storing it at a slightly higher temperature should prevent the problem from happening in the future.

A quick but probably undesirable answer is that you can add alcohol to ice cream in order to not allow it to freeze as hard. I'm guessing however that you are not looking to get your patrons drunk and to be fair I can't imagine an alcohol that would go well with peanut butter, so we won't go with that.

That being said ice cream freezes very hard when there is low fat content in the product. Higher water content = more icy consistency. Stabilizers are added in order to give the appearance of creaminess despite not having a high fat content by retarding the growth of ice crystals.

The best thing to do would be to check an ice cream recipe that doesn't freeze very hard and try to aim for a fat content that is similar to that. I've never used liquid peanut butter but to me that sounds like it would be lacking in the fat that's normally in peanut butter and because of this the ratio is off. I could however be wrong.

Not the answer you're looking for? Browse other questions tagged dessert ice-cream peanut-butter or ask your own question.

2
How do I get softer peanut butter cup ice cream?

5
How can I flambé ice cream?
7
Recommendations for making ice cream with milk and corn starch (corn flour)
11
"Soften" ice cream to make ice cream bars
2
emulsifier and stabilizer equivalent to one yolk for frozen desserts
2
How to remedy rock-hard sugar-free ice cream
5
Improving texture of yogurt based ice cream- stabiliser?
0
What do you make of these ingredients in Ice Cream?
2
How do I get softer peanut butter cup ice cream?
3
Emulsifying (and stabilizing?) a sesame oil ice cream
13
Can Ice Cream Maker Wall be Too Cold?