Just started using a stainless steel pan. First thing I cooked in it was bacon followed by some fried rice. Stuff stuck to it, but a quick soak and it all came off. However, once I cleaned and dried it there is a kind of gray discoloration on the bottom of the pan. It essentially disappears if it gets wet, but when I dry it, it comes back. First -- is this normal? If not, is there a way to fix it? 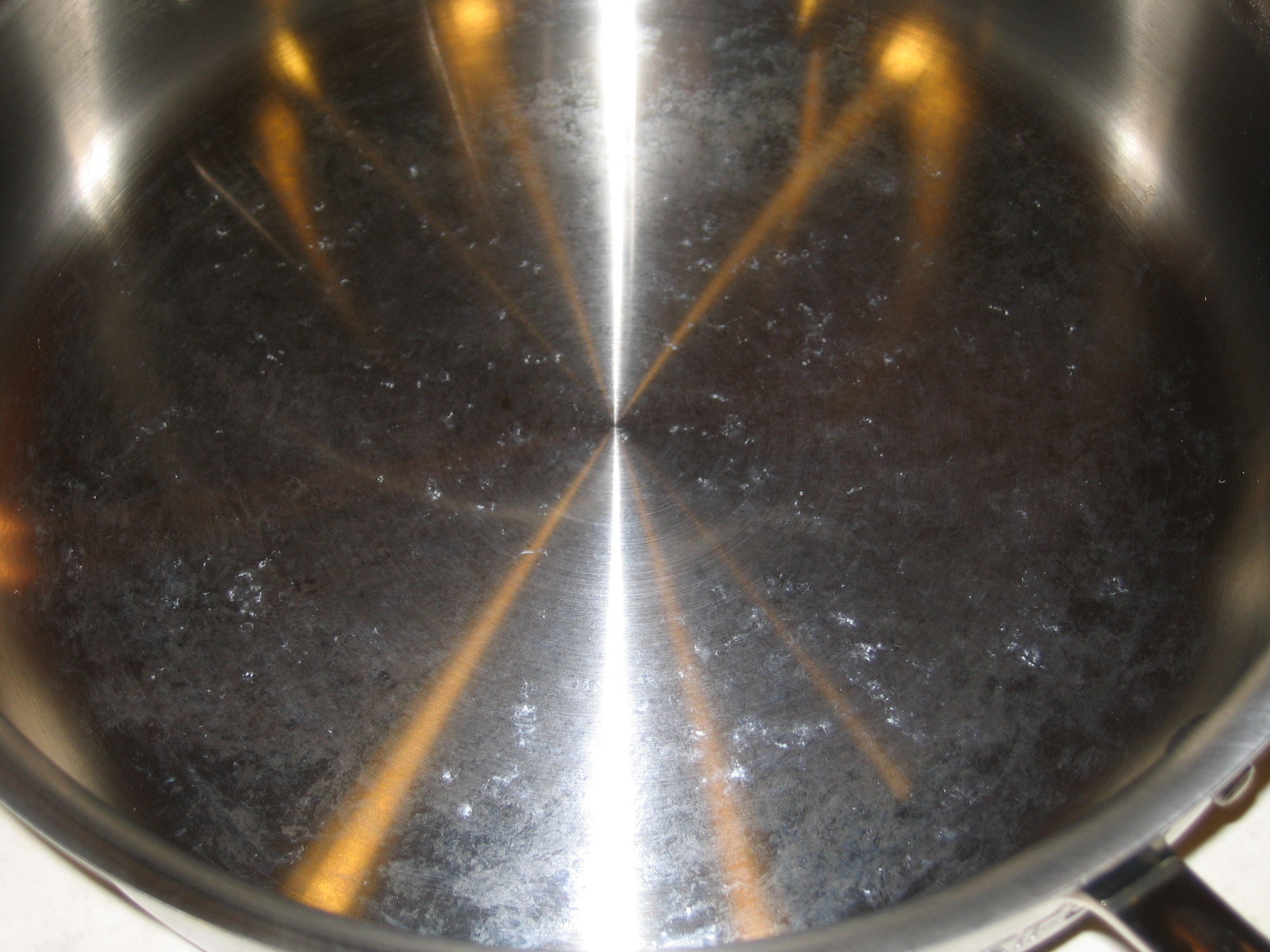 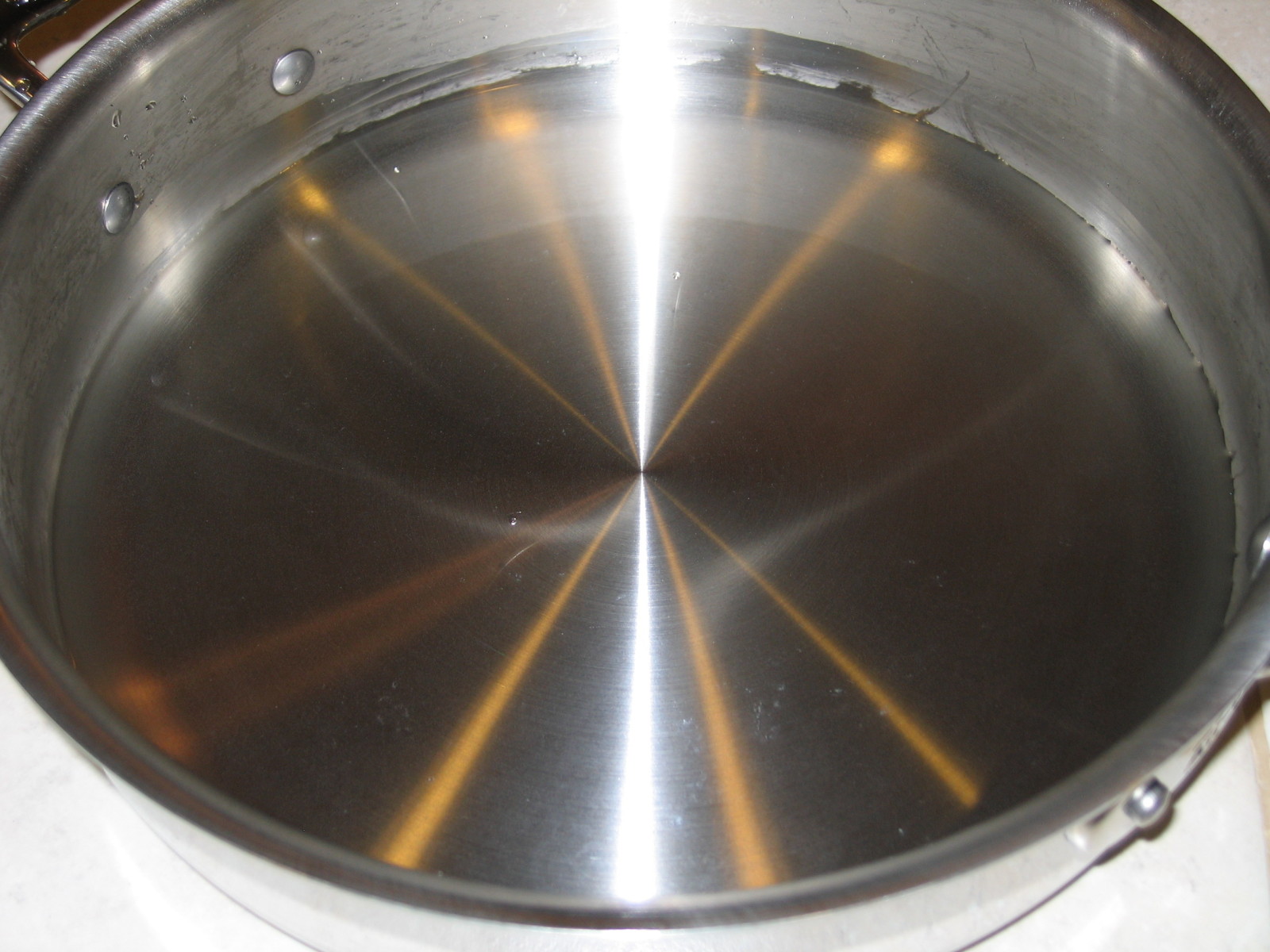 This happens to mine, and they are most definitely stainless, not aluminum. Our stainless sink gets the same way. I assume it's from all the minerals in our water. I have found that mixing up some Oxyclean and water and a couple of minutes' soak and a scrub with a plastic scrubber will get rid of it (both from the pan and from the sink). It comes right back, though.

I haven't found that it has any negative impact on the usability of the pans, and doesn't shorten the life significantly if the 14+ year old chef's pan I use almost daily is any indication.

I did a little more research, and it's definitely mineral haze. Recommended treatments are Barkeeper's Friend (mild oxalic acid) soak/scrub, or boiling some vinegar, either one followed by a thorough rinse. In theory, if the haze is left alone it could develop into buildup, which would begin to degrade performance, but in practice it's not an urgent worry.

So if it bugs you, clean it off with mild acid or oxygen bleach. But expect it to come right back. If you only removed it once a year, you'd be a couple of years ahead of my cleaning schedule, and I haven't seen any harm from it.

bikeboy definitely has it right, but just to be a little more specific:

What you're seeing is scale, also referred to as fouling and several other terms. In all probability, it is specifically limescale that you're seeing, and it's very common in hot water taps, kettles, and on air-dried cookware.

If you have hard water (or even if you don't) it will tend to contain small amounts of dissolved calcium bicarbonate, which is completely harmless by the way, but when you boil the water it breaks down into calcium carbonate, which is still harmless but has low solubility in water and precipitates out into solid salts at lower temperatures.

This can also get mixed up with other salts you use in cooking to create more scale.

As you've noticed, soap and detergent do not remove the scale. Nor would you expect them to; those things are intended for the extraction of oils and grease (and sometimes killing bacteria), and the above salts are even less soluble in oil than they are in water.

Acids such as vinegar or Barkeeper's Friend work because the acidity helps to dissolve those salts.

Bottom line, the mineral build-up is normal and harmless (to both you and your cookware).

If you want to prevent the build-up in the future:

If you need to clean the build-up, use Barkeeper's Friend (which is what All Clad recommends using) or a boil some concentrated vinegar as bikeboy says. Don't just use any old stainless steel cleaner, as not all of them are safe for cookware.

I get that haze in my stainless steel pans after cooking certain things, especially beans. When I notice it after washing (by hand or in dishwasher), I just spray some regular white vinegar into the pan, lightly covering the affected area, let it sit for a minute or two, and wipe it out with a paper towel. It looks brand new. On rare occasion, maybe after cooking a rice dish, I need to use a non-scratch scrubbie with the vinegar.

Sprinkle with coarse salt - add any kind of inexpensive vinegar, just enough to wet the salt to a wet paste, scrub with a paper towel for 30 seconds or so, using the salt as a mild "abrasive", while the vinegar dissolves the cloudiness. Rinse with water and dry. Voilá.

This is simpler and cheaper than using any kind of kitchen cleanser, and no toxic residue.

Because it's likely minerals in the water, it may not be an issue and doesn't need to be cleaned.

Not the answer you're looking for? Browse other questions tagged equipment cookware pan stainless-steel or ask your own question.

0
Which products are recommended to clean and polish a cooking pot?
2
Oil-like stain when cooking with gas
1
White cloudy areas on bottom of new stainless steel skillet