See this I COOKED a Brisket for a MONTH and this happened! and Can Viewers SAVE a 1-month BRISKET? of a brisket cooked in 55C and 60C for 1 month. It smells very bad! So they proved (twice) that the brisket goes bad, you can read all the comments and there are lots of suggested reasons especially that you must cook at 65C since it is only above 65C that you really kill salmonella and whatever. I don't think so, Modernist cuisine says that salmonella dies at temperatures above 48C.

My question is, what really happens? I.e. what is growing, is it dangerous, and how long does it take to get dangerous in 55C e.g.? Is it some anaerobic bacteria? It can't be botulism, he would be dead by now, right?

I have done brisket many times at 55C/131F for 3 days, no smell, everything very good. I don't think I will get any better result after longer time so I have not tried (and I don't have a youtube channel to sell crazy ideas :-) ). I do 2 days now and I get nicely rendered fat and a (sorry Americans) very nice texture.

Here we have more examples of 4-5 days, comments say texture was really bad, but nothing about bad smell. link I don't really see what would be bad for 30 days, but ok after 3-5?

Update Please read e.g. Douglas Baldwins Practical Guide to Sous Vide, I think he is much more qualified than you and me. He clearly states e.g.

Indeed, the food pathogens that can multiply down to 29.7°F (-1.3°C) – Yersinia enterocolitica and Listeria monocytogenes – can only multiply about once per day at 40°F (4.4°C) and so you can hold food below 40°F (4.4°C) for five to seven days (FDA, 2011). At 126.1°F (52.3°C), when the common food pathogen Clostridium perfringens stops multiplying, it takes a very long time to reduce the food pathogens we’re worried about – namely the Salmonella species, Listeria monocytogenes, and the pathogenic strains of Escherichia coli – to a safe level; in a 130°F (54.4°C) water bath (the lowest temperature I recommend for cooking sous vide) it’ll take you about 2½ hours to reduce E. coli to a safe level in a 1 inch (25 mm) thick hamburger patty and holding a hamburger patty at 130°F (54.4°C) for 2½ hours is inconceivable with traditional cooking methods – which is why the “danger zone” conceived for traditional cooking methods doesn’t start at 130°F (54.4°C). [Note that Johnson et al. (1983) reported that Bacillus cereus could multiply at 131°F/55°C, but no one else has demonstrated growth at this temperature and so Clostridium perfringens is used instead.]

So what he calls pathogens DIE at 50C and they die even faster at 55 or 60. IF this is true, what is the problem with the 30 days brisket at 60C? That is my question. I don't want to hear about danger zone, I know what it is and that it is exaggerated to be simpler and safer to use. If you don't believe me, that's fine, but then no need to answer.

In addition to @dlb's answer - there are a huge range of bacteria present in our food sources - many of these are capable of growing at higher temperatures than normal food safety requirements reach. The reason it is still safe to eat food at this point, is that the stomach and intestines are pretty good at breaking down most bacteria, so that they don't cause infection. Generally the problem comes when there is a high bacterial load in a food stuff.

However, there are a bunch of common bacteria that are facultative anaerobes (means can function as anaerobes or not depending on circumstances), and many are also facultative thermophiles (like high heat, but can also grow at lower temps). There's a nice chapter (paywall most likely) in this book: P.J. McClure, 21 - Spore-forming bacteria, Editor(s): Clive de W. Blackburn, In Woodhead Publishing Series in Food Science, Technology and Nutrition, Food Spoilage Microorganisms, Woodhead Publishing, 2006. It indicates that many of these bacteria are from or closely related to the genus Clostridium - a well known food spoilage organism. Other commonly found bacterial genera are Bacillus and Geobacillus, which are also commonly food-poisoning associated.

Having said that, there's one in the list of bacteria that is particularly interesting in terms of stinky smells and high temps for extended periods: Desulfotomaculum nigrificans. As you might be able to tell from the name, this one produces H2S AKA Hydrogen Sulfide - the rotten egg smell and you also get the same smell around geothermal areas. The bacterium also blackens the food - probably from reduction of the sulfur I would guess. Here's what the article had to say about growth:

This seems like the most likely culprit for stinky sous vide, but I would be willing to bet that it's not the only species present. 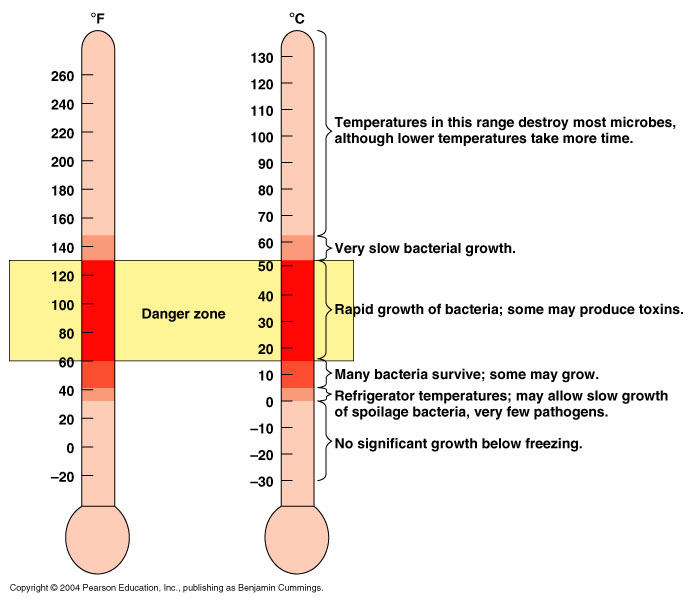 Outside of the high growth area bacteria growth is not zero, it is only much lower and there is not a magic switch that instantly kills all bacteria when you hit 60C. The safety rules say that at that point you have reduced risk, not zero risk. Bacterial growth certainly continues simply at a lower rate. However, a lower rate over longer time still constitutes rot and danger. The safety provided by reaching a prescribed temp is negated by then trying to stay there for an unreasonable time. No guides that say to reach that temperature for safety state that all bacteria are killed, only that many are and those that survive will not be reproducing at rates to be a likely danger if you otherwise handle the item appropriately. Waiting another 30 days is not handling it appropriately.

In addition, there is more to decay of a piece of meat than just microbial action. You have cell structure breaking down, chemicals being released, etc. I would fully expect, in fact be shocked, if the brisket in question would not effectively begin the equivalent of digesting itself. Bad smells and a texture approaching jelly would not be surprising in the least. A potentially interesting science experiment, but nothing resembling food should come from any such tests.

8
Sous vide meat without seasoning - strong flavor
6
Meat juice reabsorption sous vide
9
What types of food are safe for short-term room-temperature storage?
2
Blow torching meat after sous vide - add fat or not?
16
Can I sous-vide meat (at a temperature between 40ºF and 140ºF) for more than four hours?
6
Sous vide over cooking toughens meat?
4
Sous-vide - What does circulation accomplish?
3
Sous Vide long cook meat prep?
1
What's happens at temperatures in both the 'pasteurisation' and 'danger' zone?