I know that honing differs from sharpening. My grandparents never altered their WÜSTHOF 4596-7/20 Classic Ikon 8-Inch Cook's Knife since buying it on Aug 1 2018. It could effortlessly slash coconut and raw Winter Squashes, but now it can't even cut paper or pears or zucchinis! Undeniably they must alter their knife. They bought 1000/6000 grit King water stone.

Ought they buy a leather strop or honing steel? 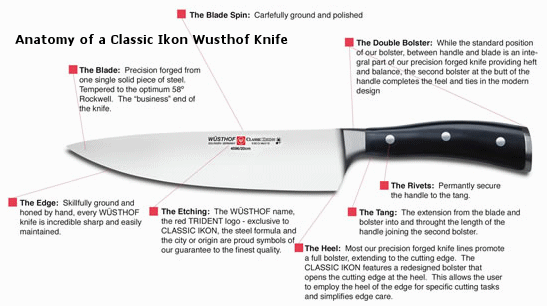 Late edit: I eventually gave up with all this faffing & bought a good electric system - https://cooking.stackexchange.com/a/108740/42066

For people who can't be bothered to sharpen their knives, getting anything that requires practise & skill seems rather pointless.

Flat stones, honing steels and strops all require skill, otherwise the knife gets duller rather than sharper.

For the unenthusiastic amateur, I'd go for some kind of pull-through system like this Füri 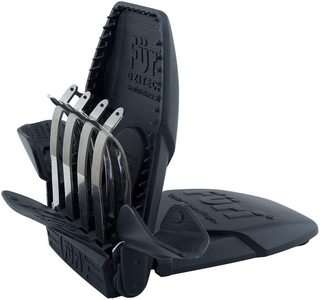 They used to make a 3-grade version of this which I own but can no longer find, with both coarser & finer grades.

To get a good initial clean edge you want a guided stoning system, not freehand. Freehand is not good if you aren't practised. Aligned systems are much harder to get wrong.

This is a fairly random Google search which turned up a store selling most of the majors - Sharpening Supplies: Guided knife sharpening systems

Basically, they all have a method to hold the knife at a set angle & one or more different grits you can drag across it without ruining everything ;) 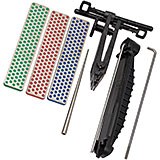 There is no need for a strop or honing steel if they aren't willing to take the time and maintain the edge.

If you want something easy and reliable for them, I suggest an electric sharpener.

We use a version of the Chef's Choice at home in the kitchen. It' will put a consistent and repeatable edge on a knife. It's easy for my wife to use and eliminates the complaints about dull knives.

1
How to maintain my knife? What am I missing, and what am I doing wrong?

9
How can I tell if a steel rod is for sharpening or honing?
5
What to look for when purchasing a honing steel?
3
Why does Wusthof call Honing Steel 'Sharpening steel'?
1
How many whetstones, and what different grits, do I need?
2
Ought I still buy a honing rod, if I'm buying multiple whetstones of different grits?
1
Why isn't the Shapton Glass Stone 1000 Grit 5mm sharpening my WÜSTHOF 4596-7/20 Classic Ikon 8-Inch Cook's Knife?
1
Why am I failing to sharpen my WÜSTHOF Classic Ikon 8" Cook's Knife, on my Shapton Glass Stone 1000 Grit 5mm?