Why is my homemade bread molding after 2 days? [duplicate]

Ask Question
Asked 2 years, 3 months ago
Modified 2 years, 2 months ago
Viewed 4k times
9
This question already has answers here:
Is there anything I can add to homemade bread to preserve it? (18 answers)
Closed 2 years ago.

I sell bread at farmers markets. It gets moldy very fast. How can I get them to last longer?

Without preservatives in the bread your bread won't last as long as store-bought, but there are some things you can do to make it last longer:

You mentioned in a comment on myklbykl's answer that you include mix-in ingredients like sun-dried tomatoes, jalapenos, and cheddar, which sounds delicious! However, that also means that you will have more overall moisture and more starting points for mold to take hold than you would when making a plain bread. That could be contributing to the faster molding. As I'm sure you know if you left cheddar or jalapenos out at room temperature they would fairly quickly spoil and grow moldy.

This may or may not be something you can change given your baking style, but you could experiment with drying out those ingredients somewhat before baking to reduce their final moisture content.

As another experiment to determine if those ingredients are in fact part of the mold problem you could try making two loaves at the same time, one with the extras, and one without. Then store them the same way and see how long each takes to mold. I would suggest that method (which is a simplified type of the scientific method) when testing different recipes. You will only know if something like ascorbic acid makes a difference in the shelf life and flavor if you are comparing it directly with a control (meaning a loaf that is done your normal way)

Hang a big sign over your stall saying "Artisan bread has no additives. If it had all the chemicals in it that supermarket bread does, it would last as long. But you don't want the chemicals, do you? So eat it while it's delicious!"

This is something which just needs consumers educating about what proper bread is like. It should last two days, kept in a box, but it won't be as good the second day. If you go to France, bread is something you buy fresh every day, and that's just how it works. And that's why French bread is the best in the world, because their customers know what it should taste like.

Bread does freeze well though. Your customers could easily put the loaf in the freezer as soon as they get back, and it'll last for months (or until it gets eaten). I tend to make rolls instead of loaves, because it's very convenient to bag them and freeze them. Then for lunches I can just defrost a couple at a time. 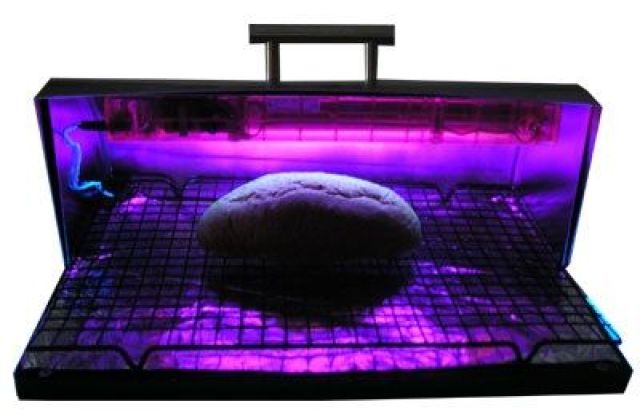 UV kills spores and airborne microbes. I wondered - has it ever been studied for preventing bread mold? Yes!

But according to the folks at InventGeek, it actually does its job, increasing the shelf life of bread by about 50%, and preventing any mold from growing on the exterior of the bread (it may still grow inside, however).

Germicidal UV lights are available off the shelf. Or were; maybe in the days of covid they have all been bought. In any case, you could make a UV bread chest that you bring to the farmers market. Opening it would be like opening a box containing kryptonite, or the trunk of that car in Repo Man.

Does being German qualify me to give an answer here? ;-).

I recently wanted to buy a specific bread at our local organic artisanal bakery. The clerk said "I'll happily sell it to you but be aware that it has a shorter shelf life than the other breads because it is not a sour dough bread but a pure yeast dough."

Most whole grain and other non-white breads sold here in artisanal bakeries are sour dough breads made in a lengthy and multi-stage process involving a sourdough starter. The resulting acidity results in a bread which has a longer shelf life (maybe 4 days at room temperature) than bread which has been baked just with yeast.

Another detail which may be surprising to Americans is that even pre-sliced industrial bread in plastic bags here usually does not contain preservatives. This is true even for sliced toast bread, which, I suppose, is not a sour dough bread. It still has a shelf life of two weeks or so at room temperature. (The shelf life is reduced to a few days once the bag is opened, probably introducing mold (spores) into the bag.)

I suppose that this is achieved by packaging the bread in a clean environment at 60 centigrades (140 Fahrenheit) or higher, resulting in a pasteurized product. In particular, some mold spores will still be present, but not many live cells. The packaging of such bread is an airtight plastic bag which makes it impossible to retain a crunch crust. You could try experimenting with packaging materials which keep micro-organisms out but are somewhat vapor-permeable, preserving some of the crispness. After all, you are not aiming at 2 weeks but perhaps at a shelf life of 4 or 5 days. I have seen paper bread packaging which has intermittent plastic stripes, reducing the loss of water vapor over time.

31
Is there anything I can add to homemade bread to preserve it?

31
Is there anything I can add to homemade bread to preserve it?
12
why is my bread too tough?
3
Why isn't my bread machine making any bread?
4
"Acetone" smell on bread
5
Moldy bread smell but no mold?
8
Bread preservation
6
Green and white mold on dry part of onion only. What to do?
4
What causes gaps/holes in homemade bread?
2
Undercooked French Bread in Bread machine
2
Baking bread with a firm texture that doesn't grow mold