Can I make cornbread without flour?

I am in the UK, but acquired a taste for cornbread from previous visits to the US (it is almost unknown here).

I’ve successfully made cornbread in the past and have quite a lot of cornmeal in my kitchen. However, at this time of lockdown, with folks getting bored and baking at home, it seems to be quite hard to get hold of flour; stocks are running low. Every recipe I can find online for cornbread involves using (roughly 50:50) flour with cornmeal, usually all-purpose.

I’d like to minimise the amount of flour I use. Is it possible to make cornmeal with no, or very little, flour? How little can I get away with and how should I amend the rest of the recipe?

As far as I know, generally the problem with corn based doughs is cohesion.

Cornmeal only mixes tend to be very crumbly and the resulting consistency weak, hence the addition of flour to increase gluten content and help improve agglutination.

That being said, upon a little research there seem to be plenty of flourless recipes around, originating more towards the south of the United States where apparently it is more common to use less flour.

A quick Google search will probably yield lots of recipes for no flour cornbread.

Most just seem to compensate with the inclusion of additional eggs, more sugar, milk or other ingredients to help with cohesiveness.

You may also not adjust at all and simply assume the fact that you will end up with a crumblier consistency and "sandier" texture. It is mostly a matter of personal preference, so if this is not an issue give it a try if you have a chance. Maybe you enjoy the slightly stronger flavor and coarser feel.

In Portugal we have a traditional type of cornbread called Broa which is closer to an actual bread, rather than a quickbread or cake. It is made with cornmeal, combined with rye or other cereals, and the ones considered higher quality generally have less wheat flour. It generally tends to be a heavy bread with dense consistency, dark brown crust with a cracked appearance and a slightly crunchy feel. 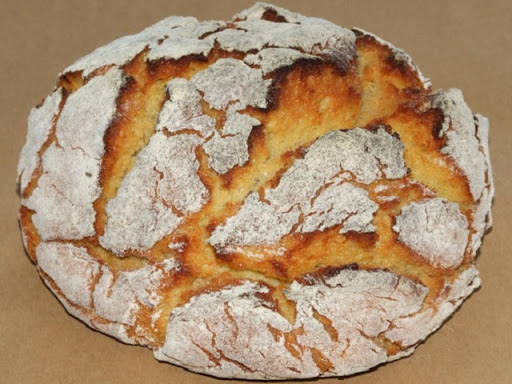 Not the answer you're looking for? Browse other questions tagged flour cornmeal or ask your own question.

8
How can I produce a more soggy Neapolitan pizza crust?
8
Can I make ciabatta with corn flour?
7
How to make stone ground flour?
5
What is arepa flour?
5
How can one make dry fine hazelnut flour?
4
Pizza dough with a mixture of strong and plain flour turned out surprisingly well. Lucky? Better with lower gluten?
5
Can using a poolish or biga preferment help me make a less dense wholemeal bread?
2
Can I mix all-purpose flour with high-gluten flour to make bread flour?
4
Bread is not rising