I'm beginning to think this whole "egg-free mayonnaise" thing is an extremely elaborate practical joke. I have exhausted all the tips Google has yielded, so I'm hoping someone on here has an idea what else I might be doing wrong.

Result: a very homogeneous white soup the consistency of water. There are no visible oil droplets. It takes about ten to fifteen minutes for the first oil droplets to appear, and a few hours for an actual layer of oil to form.

I am so very out of ideas. Any help is greatly appreciated.

Edit: tried a few more things and added them to the list of things that do nothing.

Well this is ... disturbing. Switching to a different brand of soy milk let me succeed on the first try. I have no idea what the manufacturer of my usual brand does to it, but after more testing, even water+lecithine works better than that brand of soy milk.

I hope it's okay to answer my own question. For anyone who comes across this via Google in the future: I tried two different brands of organic soy milk with the same official ingredient list and no visible differences, and one consistently produces mayonnaise while the other consistently produces soup.

Thanks to all the nice people who took the time to try and help me!

Your recipe calls for a 2:1 ratio (by volume) of oil to soy milk. In normal mayonnaise recipes, the oil:water ratio is 5:1 or more. I honestly can't see that recipe ever producing anything but soup. Try quadrupling the oil.

I have made eggless mayonnaise before. For your quantity, in addition to the lecithin, add 5 tsp of modified cornstarch and 1/4 tsp or more of xanthan gum. Fine tune from there as I use less oil.

Mustard is an emulsifier. I would try just starting with whole-grain mustard if you have it (or any mustard if not) a little vinegar, lemon juice, and perhaps a bit of water, and then use a hand mixer and gradually add oil as you build the emulsion (you can do with a whisk but it is more work). When you have the volume you want, salt to taste.

I just found this recipe on line.

OK. I just tried an experiment and I'll call it a modest success, though more time needs to spent to perfect this.

Experiment 1: Dijon mustard, oil, vinegar, and water. I was able to get a stable emulsion but it was too mustardy and too thin.

Experiment 2: I started with 1 tbsp of soy lecithin and 1 tbsp of water and combined them with my hand mixer. Then I gradually added oil and it made a stable emulsion. I then added salt and the emulsion broke. :(

Experiment 3: This time I started with 2 tbsp of soy lecithin and 3 tbsp of water. I added oil and the emulsion maintained. I added a little vinegar and water and more oil. Emulsion was good. I kept adding more oil, then I added some dijon mustard. At the addition of the mustard the mayo became much thinner and I was afraid I may have lost it, but I added more oil and kept blending with my hand mixer and was able to get most of the thickness back (see photo below).

More experimentation is needed, but I added some salt and lemon at the end and tasted it and it tasted pretty good. 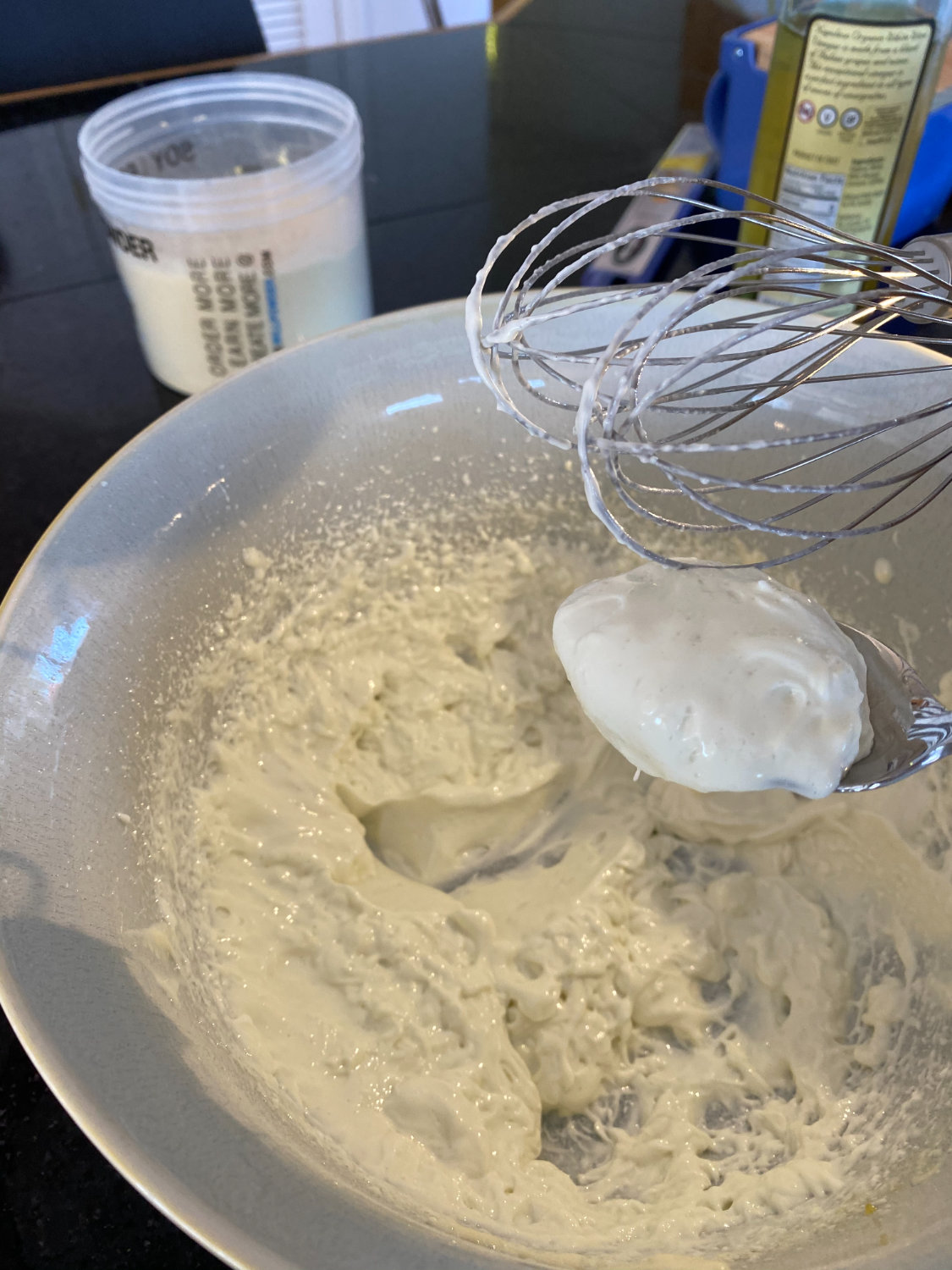 Because of all the additives in most soy milk, it's best to use pure soy milk made from only soybeans and water with nothing else added.

I also use dried mustard and have had the best results with a food processor as it's easier to pour the oil in very slowly.

Not the answer you're looking for? Browse other questions tagged vegan mayonnaise emulsion or ask your own question.

1
What is causing my homemade soy milk mayonnaise to have a different consistency than one made from store brought soy milk?

23
Why doesn't mayonnaise taste like pure oil?
2
What are some alternatives to xanthan gum for stabilizing mayonnaise?
4
Mayonnaise in stand mixer is very runny
4
Sugar won't dissolve in cacao butter
2
Mayonnaise advise
1
What influence does the properties of fat in vegetable oil affect emulsification of oil?
3
Emulsifying (and stabilizing?) a sesame oil ice cream
13
Is there a way to dilute oil?
1
What is causing my homemade soy milk mayonnaise to have a different consistency than one made from store brought soy milk?
0
How to make vegan mayo with soy lechitin, oil and water without failing