When I try to replicate Portuguese Sweet Bread (Massa Sovada) from places like Fall River, Massachusetts, the crust on my bread comes out thick and hard, whereas the bakery versions have a thin, soft crust that you can almost peel off, and there are noticeable wrinkle lines. 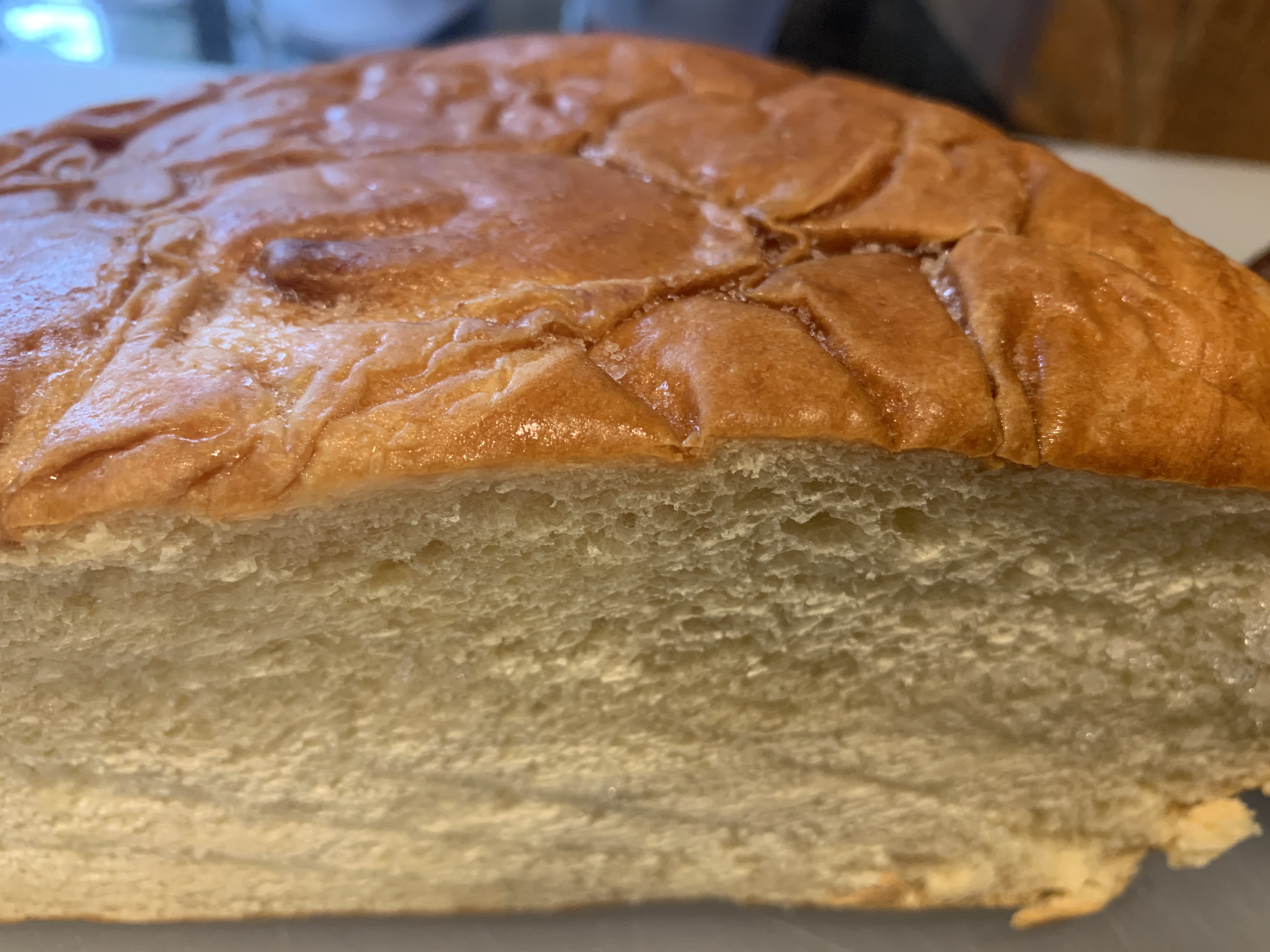 And here's mine, with the thick, hard crust: 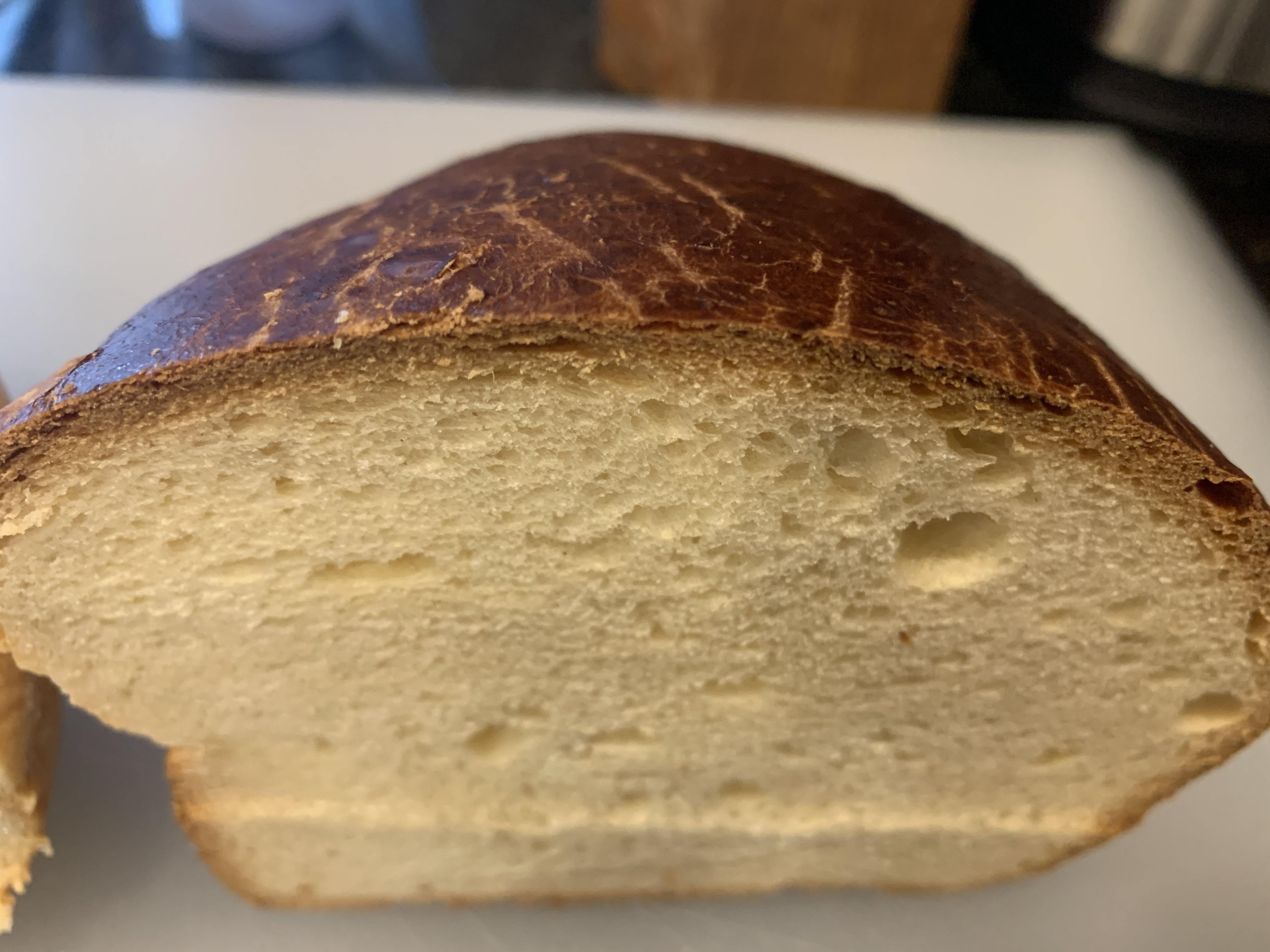 I've looked at several recipes and most are very similar. Here's the one I'm using:

But nothing changed the crust much at all.

The wrinkles on top look like maybe it was put into a plastic bag right out of the oven, and the steam caused the wrinkles. But my test with covering the loaf with a bowl didn't change the hard crust at all.

There's a similar post with suggestions such as using a Pullman (covered) loaf pan but it seems unlikely to me that the bakery is doing that because of the shape of the bread and the type of pan I know they use (which can be seen here). I have wondered if covering it with foil for part of the time might help, but I'd be surprised if the bakery is doing that. The post also has suggestions to use steam (which seems like it'll have the opposite effect) and to user lower temperatures, which I followed exactly using the three temperatures I mentioned above. For those reasons, I don't believe the post answers my question:

How bakeries do a soft crust breads and making the same at home will result in a crisp crust?

Thanks for any other ideas!

I'm the OP. After a lot of experimentation and reading, I've found that the solution is to use steam. A lot of articles talk about how steam is necessary for a hard crust so that made me think it was the opposite of what I needed.

I learned that steam does several things, including keeping the top surface soft for longer so the bread can expand further, preventing the crust from burning, and helping the starches become a gel that turns into a brittle and glossy shell. But in almost all cases, recipes call for steam to be used only during the first portion of the bake, and then removed to allow a hard crust to be formed in the latter part after the bread has finished expanding.

I did several experiments where I added steam for a little bit longer each time, finally just using steam for the entire bake. That's when I finally got the ultra-soft, wrinkly crust like in Portuguese Sweet Bread. After going back to read the article mentioned above, I realized that its suggestion of adding a tray of boiling water to the bottom of the oven at the beginning of baking was what I needed, but to also keep the water in the oven for the entire bake.

Keep that skin surface moist, bakers often spray some water on the bread as it cooks, this makes it tender flaky and soft. Hard crust is for lack of a better word, dry/burnt

4
How bakeries do a soft crust breads and making the same at home will result in a crisp crust?

6
How to make a sandwich bread with a very soft crust? And what is the ideal temperature to bake sandwich bread?
15
Why is supermarket bread soft?
5
What would be the effect of doubling the egg in this bread?
7
How can I make a super-thin, yet strong, calzone crust?
1
Why does the crust of a freshly baked loaf of bread become less crunchy/hard over time?
4
Bread crust separated from interior
2
Is there a way to make this bread recipe's crust less crunchy?
4
How bakeries do a soft crust breads and making the same at home will result in a crisp crust?
1
How to obtain the soft and pillowy texture in bread?
0
How to avoid shrinking bread loaf after baking?