Cleaning out residue from thread of sport mixer base

I am talking about the following accessory: 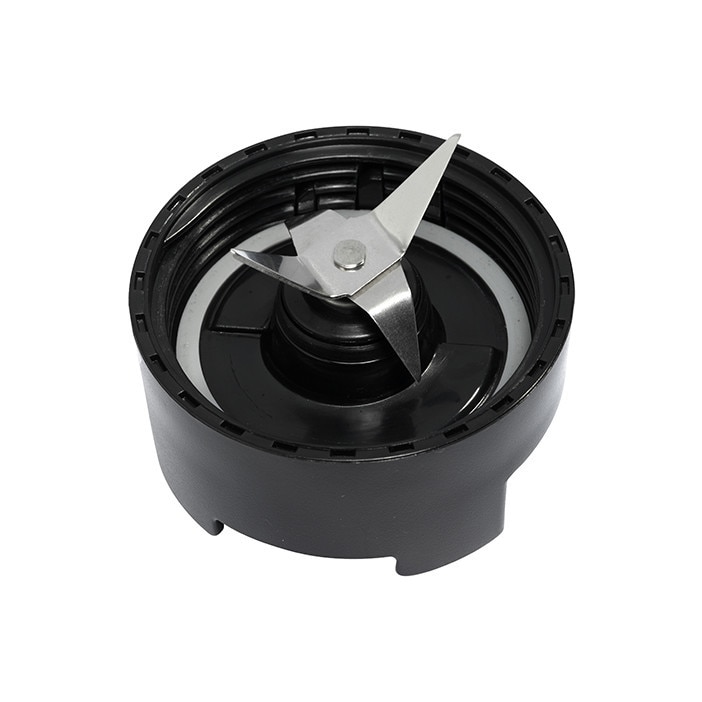 The problem is that in the thread (i.e. the "cracks" onto which the bottle is screwed on when blending the fruit) some fruit remains got stuck. No amount of scrubbing with dish soap/sponge and rinsing removed them so far (they just get wet, maybe even loosen up a bit then dry out again; maybe it is even worse now, because now it is fruit remains soaked with dish soap, which could end up in the fresh smoothie...).

Although I was able to winkle this residue out partially with the tip of a knife, I am looking for a better solution, because that way is neither effective nor perfect (I think about 40-50% of the residue is still there, and it is a pain to do this process anyway).

Long story short, the problem is that the thread is too tight and too deep to effectively reach and clean out with the usual means.

So I have basically two questions:

I tried to do some research, and I found the suggested way of cleaning out blenders is to put water and some dish soap in it, turn it on, and let it do the rest. But I don't think it would work in this case, because when the blender is running, this thread is theoretically sealed by the bottle which is screwed on. (Which is a good thing by the way, because in this way, in theory, the residue can't get into the fresh smoothie. On the other hand, the question arises how did it get there in the first place then?)

Prevent it from sticking in the first place by putting in a bowl of cold water, or cleaning it right away, if you let it dry on it's a real pain.

Muck in the threads can be extracted using the pointy end of a skewer if it's really stuck on, I find an old toothbrush does a great job as well. Soak it first.

Not the answer you're looking for? Browse other questions tagged cleaning blender or ask your own question.

3
How often should I clean my coffeepot, and what is the preferred method?
5
What causes the black discoloration on this plastic electric teakettle?
8
How do you properly wash hands after dealing with raw chicken?
1
How to clean stains from rice cooker element?
1
What is the white residue on pots after cooking beans or lentils?
7
How to clean burnt food from an unglazed tagine
3
How can I remove sticky residue from a pot I boiled salsify in?
4
Is it sufficient to wash utensils, which have touched chicken, with soapy water
0
Do dishes used for preparing food need to be washed with soap?