Almost five years ago, my husband and I retired to the Abruzzo region of Italy from the U.S. I've made a lot of cooking adjustments, but beef cuts have me beaten. I want steaks and roasts. Research has helped very little. Dialect gets in the way in villages and I'm a long way from the closest large city, Roma. Photos are met with quizzical looks. The closest we have gotten is "girello", from the shoulder. I want top round, sirloin tip roasts, and NY strip, T-bone, and rib-eye steaks. The only time I sort of got what I wanted was when I recognized a piece of meat that resembled a filet, but it was huge and there was no "mignon" about it. It was good, but pretty expensive. I have seen few cuts with marbling, but a lot of stringy tendons. They don't seem to cut meat in the same direction I'm used to seeing. We have a good butcher who is willing but doesn't seem to be able to help. I welcome any suggestions as to how I can shop without being so frustrated. Thank you for any assistance.

As someone who has moved from the US to another country I can relate and have some general advice. Rather than spending time trying to find the US equivalent of something try to take advantage of what's good and plentiful locally. If there's something you desperately miss there's always an online store to help, the trick is not to miss those things as much.

I wrote a meat app years ago and did a lot of research as I wanted to make an equivalents table for meat cuts across the world. I gave up because it was impossible: cuts are very different from country to country, there may be no exact equivalent for what you are looking for. Instead I would suggest you try a different approach by describing what you want out of the meat and how you plan to cook it and relying on the butcher to give it to you. Rather than saying 'New York Strip' tell the butcher you want a tender cut for charcoal gilling, for example.

Would it help to compare these two graphics from Wikipedia side by side to find the correct butcher term? 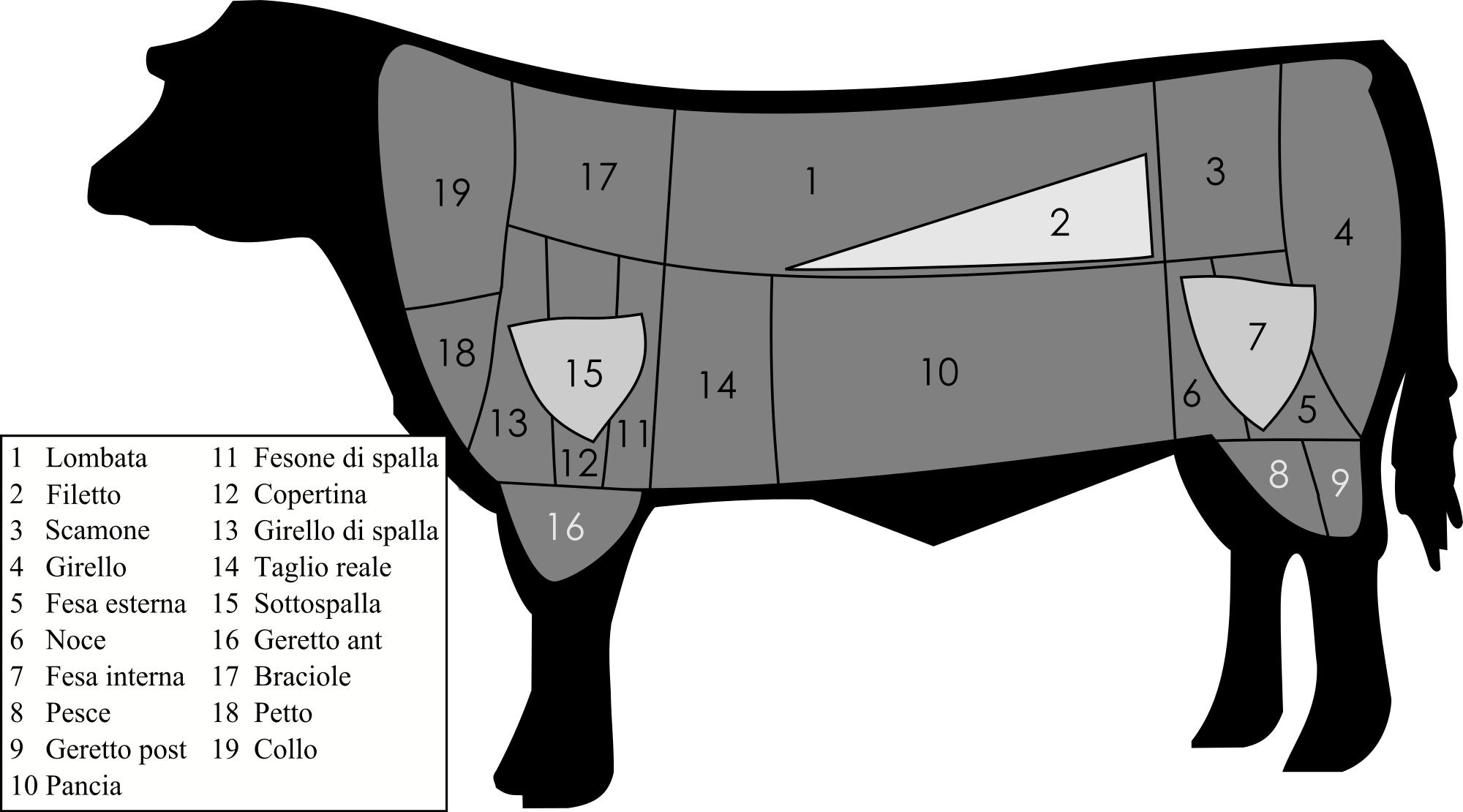 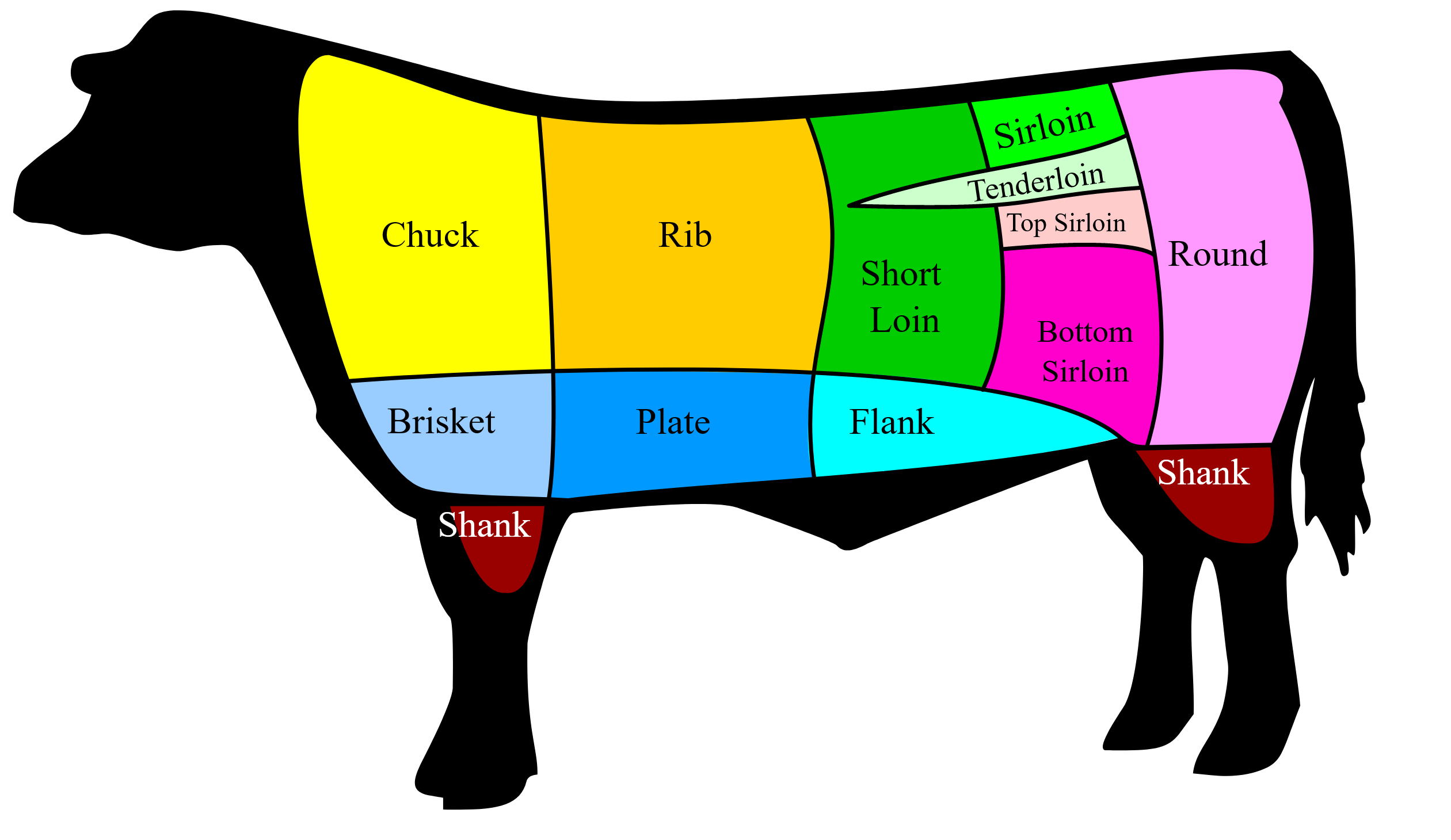 As we can see, the Italian graphic has 19 distinct areas, while the American graphic only has 12 (I don't know how many "special cuts" are omitted though). As others have said, there are cultural differences here, so you might never get a New York strip or short ribs in Italy whatsoever, as they just cut up their cattle differently.

On a personal note, I have noticed that compared to Austria and Germany (I'm from Austria), meat in general in Italy seems to be more tendon-y and less cleaned up when you buy it.

Finally, if you do want a nice T-bone/porterhouse, might I suggest to order some "bistecca fiorentina" (just "Fiorentina" would be enough to be understood). Those are massive steaks that easily weigh in at 800-1500g (1.8 to 3.3 pounds) a piece. A good butcher should be able to get that for you no problem.

I think your goal can't be reached. This is not a mere language problem - it is just that there is no market in Italy for the products you want.

There are people to whom the difference won't matter, but from your question, it seems that you have very strict expectations of your meat, and care about small differences in taste and texture. This is not a good or bad thing on its own, but can become a hindrance for you when you set standards which cannot be met.

First, if the difference was only in how the meat is cut, you would still be extremely hard pressed to find what you wanted. I don't think that supermarkets cut their own meat, even when displayed in a vitrine as opposed to being sold prepackaged. Specialized butchers are not that widespread, and when you can find one, that butcher has no incentive to make the cuts you like - it would involve learning new skills, disrupting his business process, and having leftover pieces which the other customers don't recognize and don't ask for. That's much more trouble than one customer is worth.

Second, the assumption that it is only the way the cow is cut up is an oversimplification that doesn't hold in reality. Animals taste differently depending on many factors, including their breed, food, physical and social environment, age at slaughter, and there are even theories about their emotional state during the slaughter. These factors differ between cattle raised in different countries - partly because of convenience and available resources, partly because of laws, partly because of tradition, and partly because of customer preferences. So, a cow coming out of the American meat industry won't taste the same as a cow coming out of the Italian meat industry, even if you had a butcher cut it up into the same pieces.

So, instead of concentrating on your wish to have a product for which is no supply and no demand where you live, my suggestion is that you find strategies where you work with the product available. Else you are headed up for endless frustration.

Have you considered looking up/learning how to butcher a carcass in the American style and then requesting a half carcass from your butcher?

You could then butcher it as you desire and freeze the results.

Not only will you then get the results you desire, but it may also make it easier to subsequently explain what you want from butchers in the future.

This article has some translations of cuts from US terminology to Italian. Some of these I've never seen in Italy though. Rib-eye (entrecôte) and T-bone (fiorentina) are common though, at least in Tuscany.

I have a suggestion. I am assuming your Italian is good.

Take a trip to English-speaking countries with large Italian expat communities. Like the US; go to New York, Boston, etc.

Go to Italian neighborhoods and find the local butchers. Walk in and speak Italian. Ask for advice. If you find butchers who were butchers in the Italy before moving the US, you could ask their advice. Undoubtedly they would be familiar with your "question."

Having been in similar situations in the past, I can tell you either the US expatriate community already has this available in Italy or you have just discovered a hole in the market that could be very lucrative.

I don't know the Italian scene but where I live in central Europe there are websites dedicated to English speaking expatriates, who either don't wish to integrate or purchase products out of nostalgia. Try looking for the Italian expat suppliers and city US style restaurant suppliers. Is there a tgi Fridays?

Not the answer you're looking for? Browse other questions tagged beef cut-of-meat or ask your own question.

4
What are the best cuts of meat for grinding burgers?
3
Cooking Cheap Cuts of Beef
2
How can I make shredded beef?
4
How are beef cuts labeled in Russian?
6
What cuts are "stir fry beef" and "stewing beef"?
3
Recognize grass-fed beef?
1
What caused my grass-fed beef to taste & smell ‘off’ this time? Not sure if gamey or barnyard-y is the right description
1
Are non-brisket cuts suitable for corned beef?
4
How to get rid of the rich iron and blood taste in certain beef cuts?