How is Channa Dal processed from Chickpea? Does it have any difference?

I made hummus from dried chickpea and I removed the skin manually after boiling it. It was a tedious process.

Thats when I thought of Channa Dal or split chickpea. I want to try with that to make hummus. (I just soaked it)

But I could not find a recipe / cooking video with channa dal. So, I am wondering if there is any difference between split chickpea & whole chickpea. Why isn't it used?

Also, I am curious how is it split. Could not find info about the processing. Do they boil the chickpeas to skin it?

Does the skinning process chickpea change it in any way? What about the cooking time?

food-processing chickpeas hummus
share | improve this question | |
asked May 21 at 16:02

The chickpeas used for hummus are traditionally the ‘Kabuli’ type, grown in the Mediterranean and Middle East, whereas Chana Dal is Bengal Gran or ‘Desi chickpea’ commonly grown in India. https://wikipedia.org/wiki/Chickpea

Both are varieties of Cicer arietinum, but while the Kabuli is large with pale skin , the Bengal Gram is smaller, has darker skin and slightly more yellow flesh. 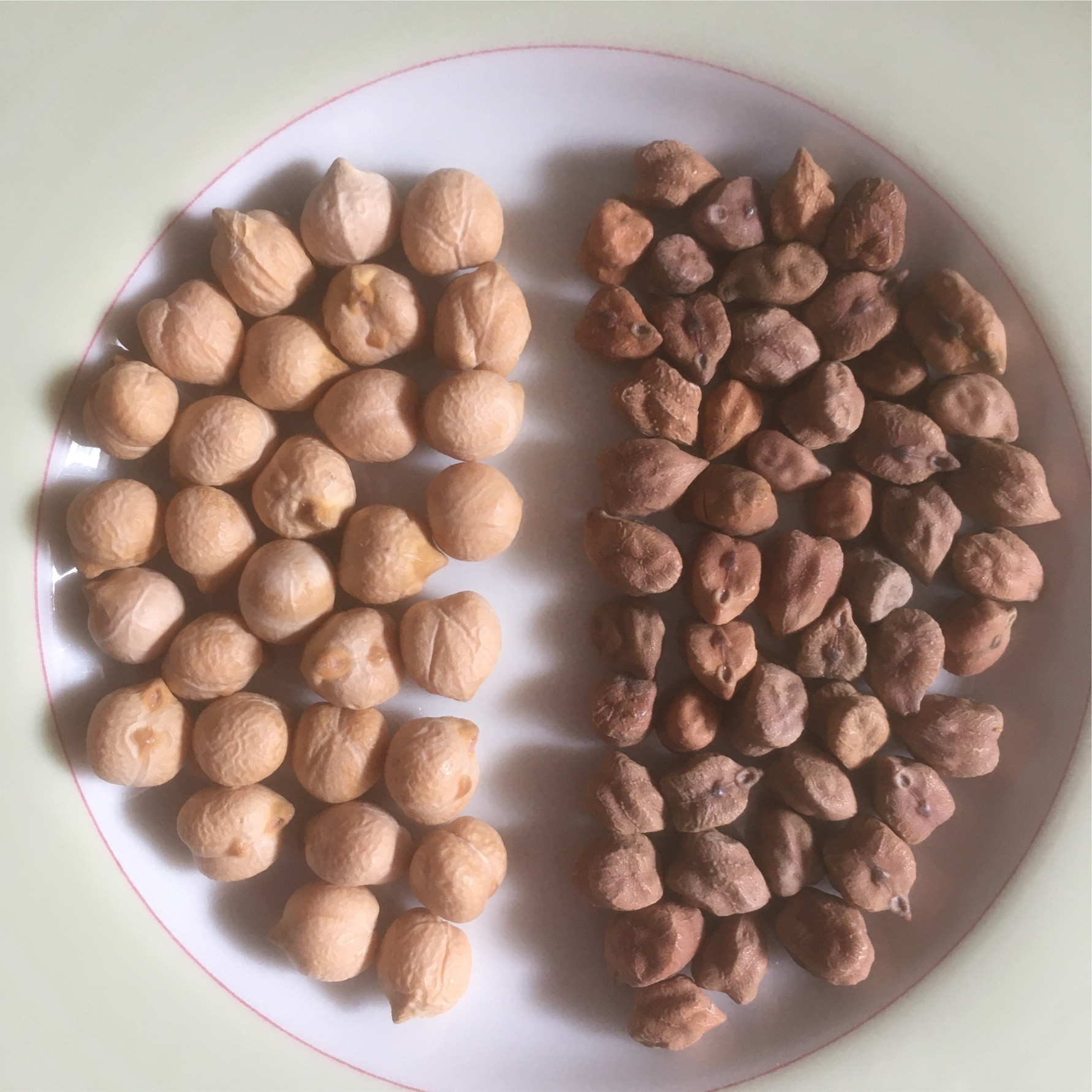 There are a variety of ways to decorticate food legumes. The oldest and most common technique involves spreading out the seeds to dry in the sun or mixing them with a bit of water before pounding them in a mortar with a pestle. The hull is winnowed off to get the clean cotyledons. Similar methods are used in commercial mills, though being much larger in scale they are adapted for greater yield and operational efficiency.

Smaller processors can expect about 50 percent removal with the first effort in traditional de-hulling methods. The process is then repeated several times until almost all the grain is converted into dehulled, split cotyledons. It can be difficult with this approach to achieve complete removal of the hull from the grain. Breakage is also a common downside.

Another method for dehulling is based on adjusting the moisture of the grain to loosen the hull. The grain is first exposed to heated air in a tempering bin, for a pre-determined time based on the variety. Through gradual aeration it reaches a critical moisture level. The hull is then removed in an abrasion-type hulling machine, while efforts are made to minimize scouring or breaking endosperm. If it is to be split, the whole dehulled grain is then ready to proceed to a splitting machine.

Many of the operations, particularly decorticating and splitting, are mechanized. Splitting is often carried out in parallel with dehulling, though both are more effective if undertaken as independent operations.

Adding water prior to dehulling helps bring about splitting. Such a step does, however, often leave portions of hull on the split cotyledons (dhal) that then have to be removed by polishing machines. During splitting, the germ, which forms about 2 percent to 5 percent, is typically lost.

Not the answer you're looking for? Browse other questions tagged food-processing chickpeas hummus or ask your own question.

4
How much foreign substance can I add to processed cheese?
16
How do they extract kernels from sunflower seeds in mass production?
7
In industrially produced soup, how does each can contain equal parts of all ingredients?
13
How can I make lemon and chilli liquid to have with hummus?
2
How to Prepare Chickpea Purée from a Can?
1
How to make Hummus that doesn't have a hardened layer?
1
How do you split Chickpeas?
1
In what ways can solid egg yolk from a boiled egg be processed/preserved?