Why are savory crepes from some restaurants brown?

I've gotten savory crepes made with a darker batter than sweet crepes. What ingredients/cooking technique produce this?

I suspect that you're lucky enough to have had the proper savoury pancake from some regions of France (e.g. Brittany). This isn't known as a crepe in French, but as a galette. This word also has other meanings, as a type of cake, tart or biscuit (British English)/ small crisp cookie (US English). Wikipedia has an article discussing many types. French Wikipedia lists many more. Here's a related picture from Wikipedia for comparison: 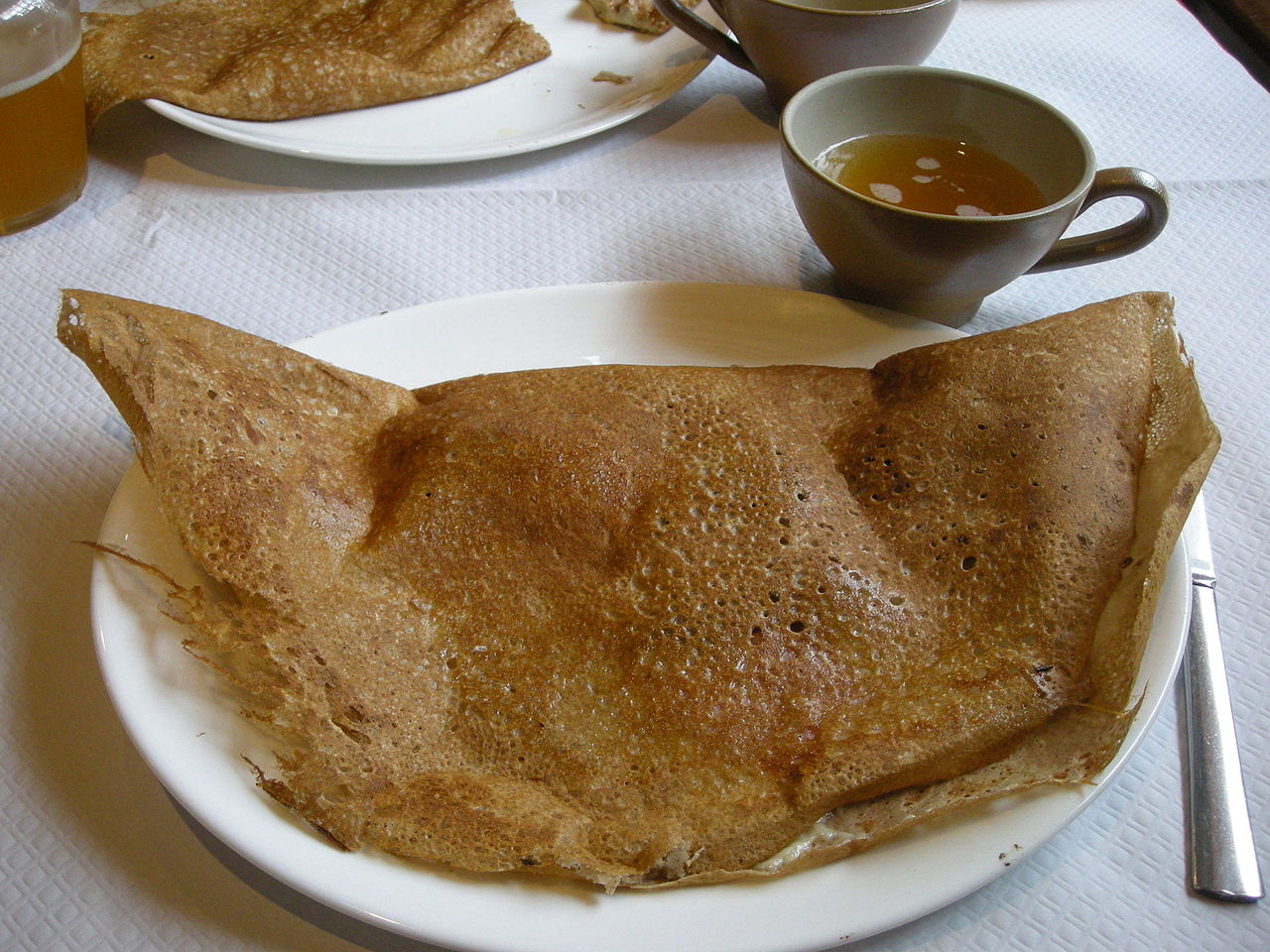 Breton galettes, i.e. those of the pancake variety, are made using buckwheat flour which itself has a mild savoury flavour, not exactly nutty but in that direction. They're a greyish brown rather than the golden colour of crepe. French names for buckwheat flour include farine de sarrasin and farine de blé noir, the latter meaning black wheat/grain/corn flour. Fillings are savoury (various cheeses, ham, etc.); occasionally nuts and honey are used together with savoury ingredients. Traditionally, galettes are paired with sparkling cider.

Galettes are not widely found outside France. In fact, even in France they are not easy to find outside Brittany, Normandy, the Loire region and the Vendee. I have been able to get them in the UK in the past. I've never seen them in the US (checking your profile), but haven't tried to find them either.

Disclaimer: French, and lover of Crêpes and Galettes. I tried to find as many English links as possible, but some articles had no English translations and are therefore in French.

It was either a Crêpe au Sarrasin or Galette de Sarrasin.

Both are made from buckwheat (sarrasin, also called blé noir), which give them their brown color.

If it had a smooth surface, it was a Crêpe, whereas if the surface was pockmarked, it was a Galette.

The Crêpe au Froment is lightweight, such as the typical Crêpe Suzette, a Crêpe buttered up with some sugar sprinkled on top before being rolled or folded. They may also come with chocolate (Nutella or melted chocolate), jam, and even ice cream. 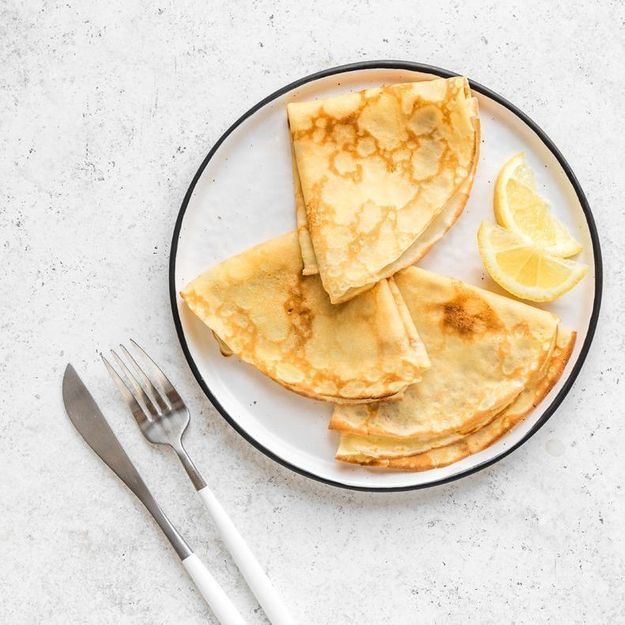 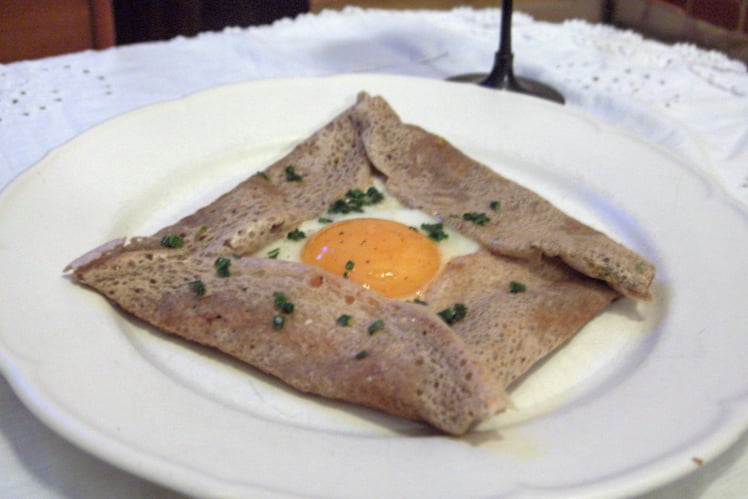 From journaldesfemmes.fr, a Galette from the recipe.

The Crêpe au Sarrasin is a crêpe. While its preparation uses buckwheat, is also uses regular wheat flour, milk and eggs. The result is a finer, more brittle pancake with a smooth surface. 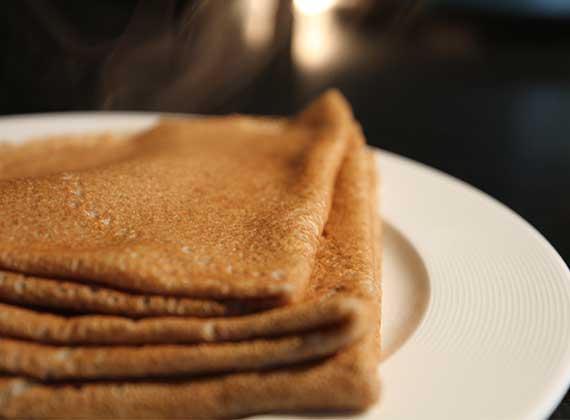 The Galette de Sarrasin instead is prepared solely from water, buckwheat and salt. It yields a thicker, more flexible pancake with a pockmarked surface. 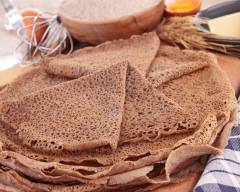 From cuisineaz.com, illustrating a recipe for crêpes.

Most people, even the French, do not quite make the difference between the Crêpe au Sarrasin and Galette de Sarrasin.

Even in a Crêperie, often founded by a Breton, or touting to have been, the name Crêpe may be used to refer to a Galette.

In my experience Crêperies tend to use the Galette de Sarrasin in preference to the Crêpe au Sarrasin; if you have allergies I'd advise checking with the staff just in case.

What's in a Crêpe?

It depends. Worse, due to the confusion between Crêpe au Sarrasin and Galette de Sarrasin the latter can also be referred to as Crêpe!

Contextual clues can be quite useful, though:

Adding to the confusion, the name Galette is also used for:

And just to make it more confusing, in Upper Brittany the term Galette Bretonne refers to Galette de Sarrasin; because why not?

Outside of old French traditions like the galettes discussed by Chris H, there are a ton of modern recipes for crepes made with different kinds of whole grain flour. It can be whole wheat, or any other grain or pseudograin. Most of them will be noticeably darker than a normal crepe made with white wheat flour.

So it is impossible to say which one exactly was that you ate. If you are so inclined, you can gather several different whole grain recipes and test them, and see which one reminds you most of the crepe you were served, or maybe which one you like most - sounds like a very fun experiment to me. Don't forget to also include "atypical" gluten free flours such as teff or plantain, they tend to take the conversion quite well and produce a nice variety of results.

The darkness and sweet/savory thing are not related, if you want it and sweet, choose a recipe with sugar, for savory take one without sugar. I basically never add sugar to my crepes, they become sweet when I use sweet fillings.

Not the answer you're looking for? Browse other questions tagged crepe or ask your own question.

13
How to make pancakes/crepes without eggs nor any liquids besides water?
10
Where to find a crepe maker
7
How to make crispy crepes?
3
Crepes sliding off crepe maker base
11
How Can I Spread Crepe Batter Before It Cooks?
3
How do I heat up pre-made crepes with cognac?
1
Ways for success on cast iron crepe pans without cooking spray
2
Vegan crepes that don't fall apart when turning
0
How to optimize the order of ingredients for crêpes batter?
10
Why not incorporate eggs at the last moment when making crepes?