Does white wine have an expiry date?

A few weeks ago, in a local Tesco store, I bought two carton packs of 2,25 litre white and red dry wine (Lion's Gate).

I noticed that the white dry wine package has an expiry date: 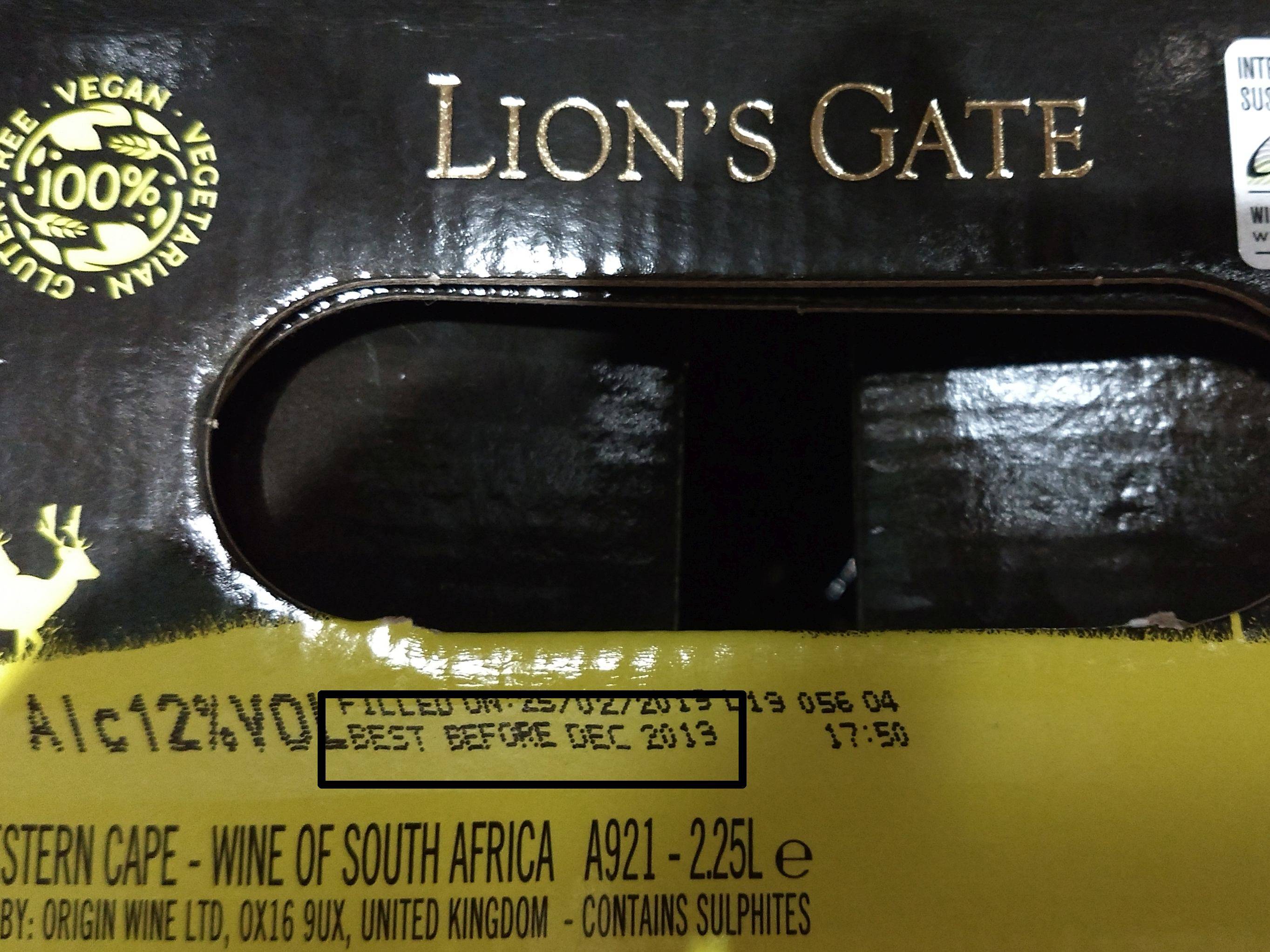 While red one doesn't have it: 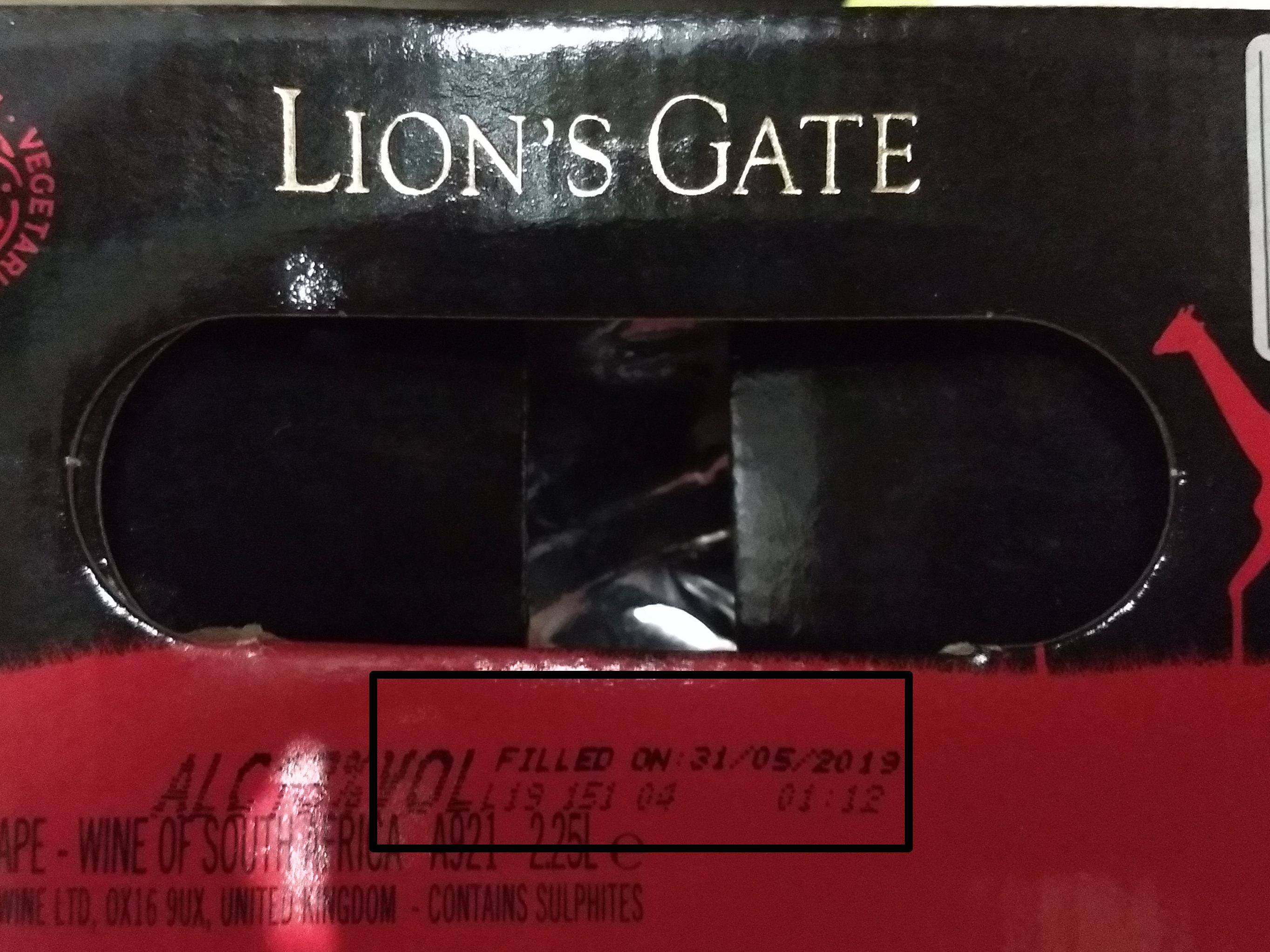 Is this just a print error? Or is it true that white dry wine can expire while red one does not have an expiration process / date at all? If it’s the latter, can anyone explain what causes this difference?

The question is important for me especially, because - as you can see - just a few weeks ago, I purchased a wine that has a supposed expiry date that was 6+ months before today. So I am unsure if I can drink it safely or rather should return it to the shop.

I don't know, if that plays any role here, but both products were packed in plastic bags in carton packages (bag-in-box). The inner bag has only a production date printed on it and no expiry date in both cases.

I have had the good fortune to speak with a few wine producers, and one thing that was universally agreed among them is that 'consumer-grade' white wine doesn't age well. Good quality whites with higher acidity (often Chardonnay or Semillon but even some more acidic Rieslings) can improve with age or at last not deteriorate as quickly, up to a point, generally 10-13 years is the limit for whites.

Red wine is red because it is fermented with the skins, which oxidize and leach tannins into the wine. Tannins give an astringent 'dry' quality, and also act as a preservative. White wines have far less tannins, often sulfites are added instead but white wine still has a more limited shelf life. Mass produced wines are in general not going to improve with age, but white wines will lose their qualities faster than reds. All the best by date means that the producer thinks after that date there may be an appreciable drop in the quality, but it will still be drinkable well past that, often it will be drinkable for years.

Another thing wine makers agreed on when I spoke to them is that boxes with foil packets are actually a really good way to store wine long term, but they don't use them because there market has the perception that box means cheap and low quality (sorry, I'm sure you're a good person deep down @trejder ;) ) . Box wine also has the advantage in that when poured the bag collapses, you don't get appreciable amounts of air in it, so you don't have to drink it within a few days as you do with bottles.

Regarding safety you have nothing to worry about. Alcohol is a preservative that kills pathogens, so even if your wine has gone bad and tastes awful it will still be safe to drink.

Please re-read the text - it says:

This doesn’t refer to any food safety issues, merely quality. The manufacturer states that until that date, no significant or perceptible deterioration of the sensory quality will happen (provided its stored appropriately). After that date, the quality may (or may not) suffer. It’s not a statement about food safety.

That said, from a food safety perspective you can keep the wine for a very long time, probably indefinitely. Why the manufacturer chose to state a best before date for the white wine only is unclear, probably because whites tend to be more susceptible to flavor changes than red. Note that today most modern wines, especially those that go to supermarkets, are not made for long-term storage, rather for consumption within just a few months after sale. Only some vineyards will still produce wine for future generations. Bag-in-box packed wines are usually intended to be consumed within six months or so after bagging and four to six weeks after opening. But neither of these time frames is set in stone or related to food safety.

Not the answer you're looking for? Browse other questions tagged wine or ask your own question.

10
Does cooking wine go bad like regular wine?
15
Does it matter what type of wine is used to make mulled wine?
5
Why are red wine glasses wider than white wine glasses?
5
Effect of wine used for deglazing on dish
2
Using white wine in the cooking
2
White wine substitute in potato leek soup
2
I have a bottle of unopened 23 year old corked spanish white cooking wine
3
Replacing dry white wine with bubbly
2
Red v White wine in cooking with a stomach issue
14
How Does Wine Enhance Flavor?