Why is there a sheet of paper in packages of minced meat?

In German supermarkets, minced meat is usually sold in a plastic box under what’s described as a “Schutzatmosphere” (protective atmosphere). It looks like this: 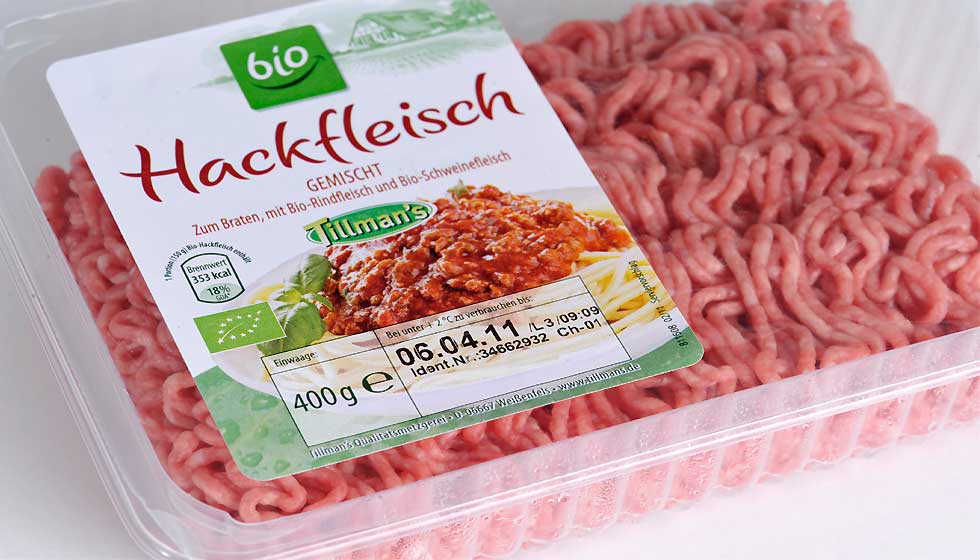 Not visible in this image, the meat is always placed on a sheet of paper. Why is that done? I haven’t found the meat to stick to the plastic more than to the paper, and I can’t think of a reason why the meat would go bad faster without the paper. Also, the plastic boxes usually have a grill-shaped bottom, so the meat would probably not sit in any liquid coming from it.

The paper isn't for you. It's for the robots.

Packaged ground meat like that is ground, portioned, and packaged automatically. The blocks of ground meat are formed by extruding them into an endless strip which is chopped into blocks and moved around on conveyor belts. To prevent the meat from adhering to the belts or falling between them, the strip is formed on a roll of waxed paper, which is sliced with the rest of the meat and remains on the bottom of the blocks through the remainder of the processing. It's not important to remove the paper, so they don't bother.

You can see an example of the technique at https://www.youtube.com/watch?v=wPRea1f8sg4 .

Can't tell from the picture, but in many places the "paper" is actually absorbent. It collects any juices, keeping things looking neat and tidy.

The paper is there to protect the meat from the juices that can accumulate in the bottom.

Not the answer you're looking for? Browse other questions tagged food-safety storage-method raw-meat packaging or ask your own question.

42
Why does a brown paper bag speed ripening?
65
Is there a problem with defrosting meat on the counter?
16
Is there anything special about fugu meat?
11
Is there a downside to tenderizing meat?
5
Why is it advised to freeze meat before eating as opposed to eating it fresh?
3
For patting dry meat, what is a substitute for paper towels?
2
Why are holes punched into rice packages?
0
Is it safe to use a disposable microwave-safe lunch box to cook raw rice with hot water directly in a microwave for 15 minutes?
0
What to use on top of a baking stone: parchment paper, a silicone sheet or a thin steel tray?