Why are many chinese sauces so dark?

I've noticed that many sauces used in chinese cooking (hoisin, oyster, bean etc.) are relatively dark, and often black in color. What's the reason these sauces are so dark? Does it have something to do with the fermentation?

You're close. In actual fact, however, most of the commercial soy sauces and other Chinese sauces you buy are not fermented at all; they're acid-hydrolyzed.

Fermented soy sauce (or other soy-based sauces) are actually translucent and fairly light in colour. But fermentation takes months, so manufacturers hydrolyze instead. The process is completely chemical, and involves boiling the beans in a strong acid and then neutralizing with a strong base (normally, hydrochloric acid and sodium hydroxide).

This process makes a much stronger, glutamate-heavy sauce than natural fermentation. It also produces a much darker colour. That's why so many of the sauces you see are dark.

Some of the sauces aren't actually hydrolyzed or fermented but will contain artificial colour, if you look at the ingredients. I guess the manufacturers figure that consumers are so used to the dark colour that they would be suspicious if it wasn't there.

Here is a picture of naturally brewed soy sauce: 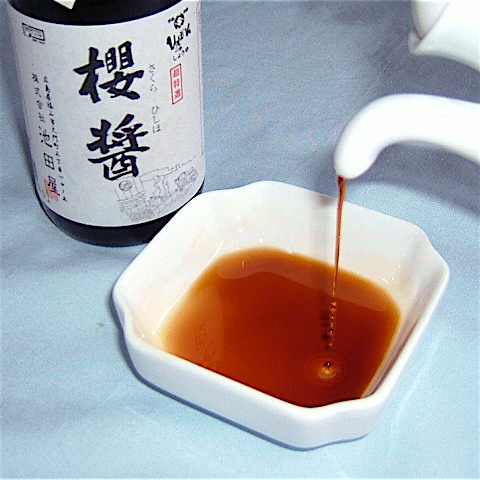 Compare to the commercial hydrolyzed kind: 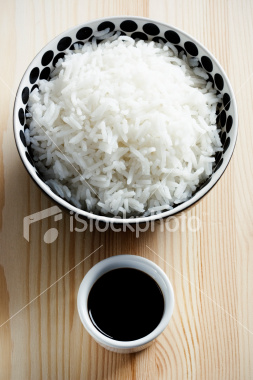 Some brands, like Kikkoman, claim to be naturally-brewed, but the colour suggests otherwise; either they do something to speed up the fermentation process or they're adding colouring.

Note: As requested, I've updated the original image to one I found of a bowl of what certainly appears to be the hydrolyzed kind, in order to give an "apples to apples" comparison. However, it's hard to find a picture of a bowl of soy sauce that tells you which brand it is, other than the Kikkoman, whose origin is questionable.

For the sake of completeness, there is also one other reason why soy sauce might be very dark (other than actual "dark soy sauce" which contains molasses), which is that the sauce might actually be from black soybeans. Those are not common, however, and unless a sauce specifically says that it is from black soybeans, it probably is not.

Not the answer you're looking for? Browse other questions tagged sauce asian-cuisine chinese-cuisine or ask your own question.

1
What is the brown sauce in authentic Chinese fried rice?

22
What kind of rice is used in Chinese cooking?
10
Papadum sauces - making my own
4
Why are my sauces splitting?
6
Making Medium-hot Mexican Sauces
6
How to keep thick puréed sauces from separating into solids and liquids?
4
Sweet sauce for Peking Duck?
1
How to make less salty Fermented Black Bean Stir Fry
2
Chinese cooking wine varieties
4
In Chinese cuisine, are the black beans fermented in Black Bean sauce?