Where does the green part of the scallion start and the white part end?

I've been using Hello Fresh for a while now and many of their recipes include the step: "Trim and thinly slice scallions, separating whites from greens." Looking at a typical scallion, I see a clearly green part, a clearly white part, and a relatively substantial greenish-white no man's land in the in the middle. 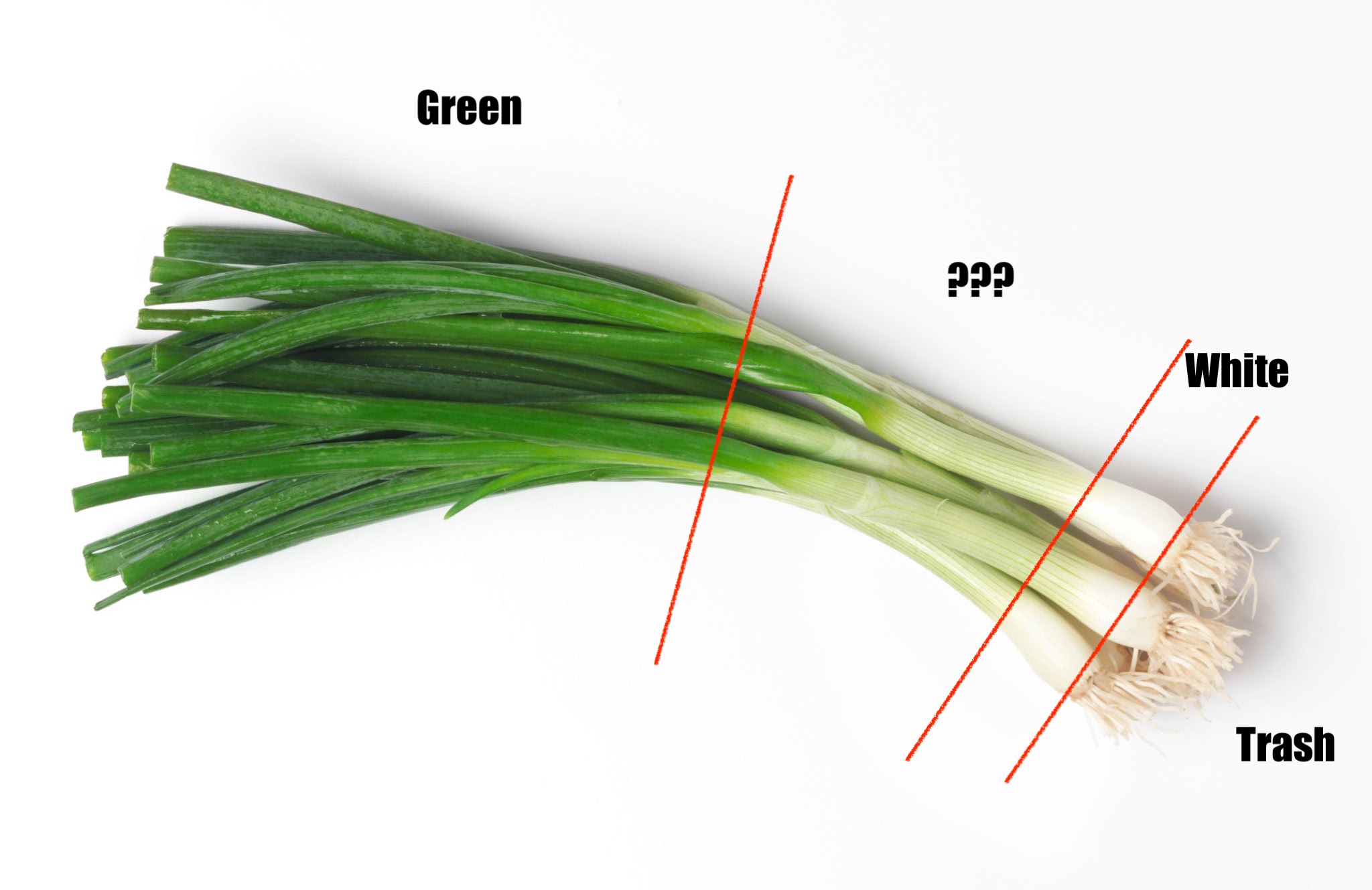 In the recipes, the greens are used as a garnish or sometimes in salsas, so I feel like the super green, super thin parts are most desirable there. The whites, on the other hand, are usually used as a cooked ingredient, sometimes, but not always in something lightly colored like rice. In my gut, the greenish-white part feel like it should be considered a white, up until the part where it loses it's white-ish moisture and softness. Are there any problems (flavor, cooked texture, etc) I should worry about by using that middle section as whites, or where should I draw the line?

If you want to be really, really picky, then the 'green' is each individual leaf as it breaks away from the cylindrical whole.

That leaves you with the decision as to whether to pick off each leaf, giving you a bit of extra 'white' or just make some relatively arbitrary decision after you hit that first leaf 'node'.

So, unless you want to pick off each leaf, then it's 'about here… ish… ' 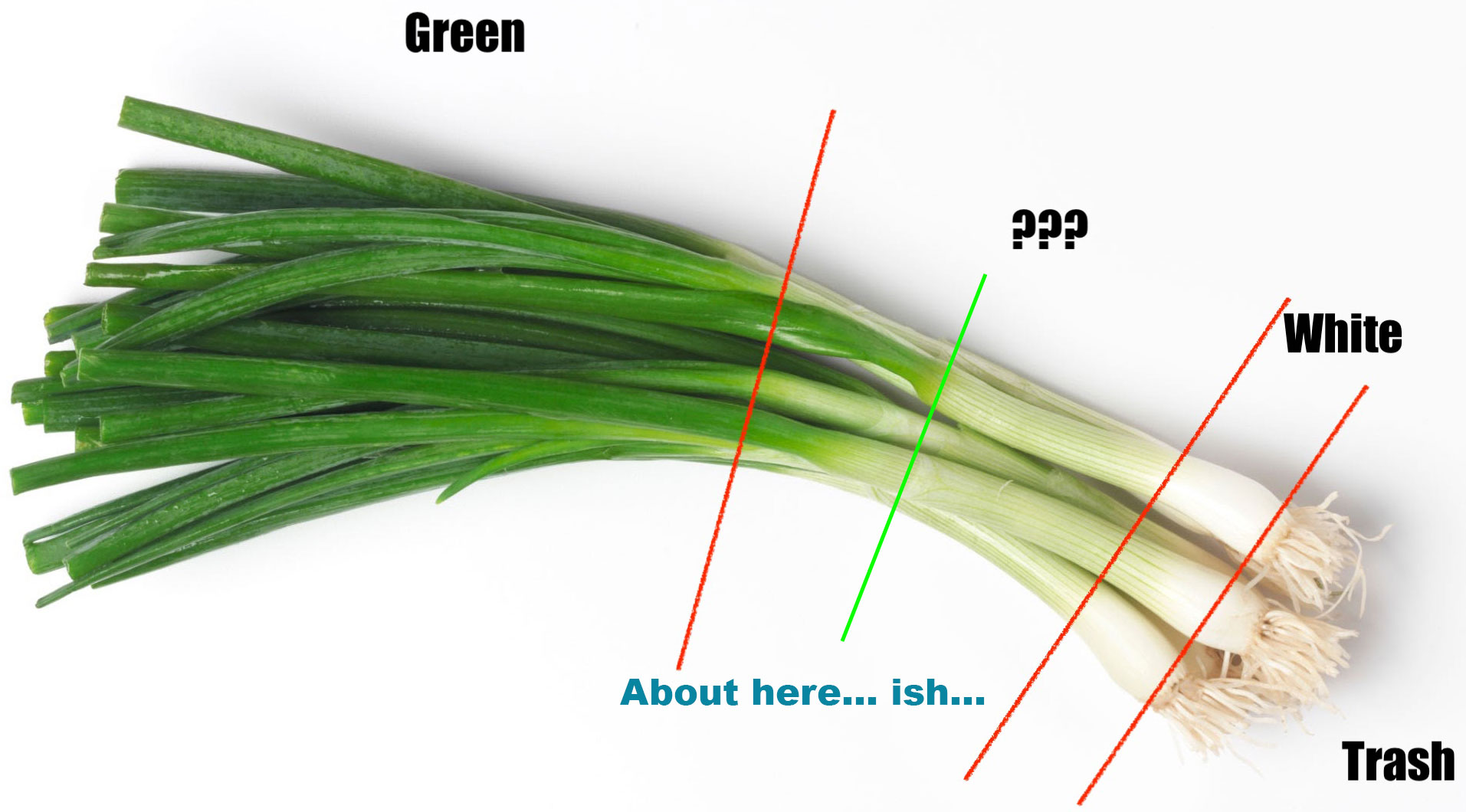 Personally, if I'm being 'a bit picky' I will unwrap the outer layer for the first couple of nodes, where they go unattractively lumpy, purely for aesthetic reasons & include the rest in my 'white' distinction. Once I get far enough I [that I can't be bothered any further] then I pick out any remaining 'white' bits & go all-in for the rest of the greens, until I hit the raggy ends, which join the roots in the compost bag.
Once you've actually cut to the green line, separation for 'fussy distinction' reasons does get easier, as you're no longer dealing with the entirety of the onion & its reluctance to part layers without ripping down to the root - you can just pull bits off & deal with them separately.

The classic "high dining" answer is as you propose: the tender light green part gets kept with the white, while the mature part of the leaf gets removed and thrown away, or used for something different than the white part. This applies also to leeks.

The practical answer is: as you like it. Not everybody follows the French culinary traditions, and there are people who use the whole plant, as well as those who use only the green part, throwing out the white. You can easily experiment with this and decide which you like best, it is unlikely that you will get anything more terrible than a snot-colored vichyssoisse.

It varies a lot. In Chinese cuisine, where scallions are extremely commonly used, the dark green end is used for garnish, while the lighter part and white end are usually used as an aromatic with ginger and garlic.

A few examples from my favorite Chinese cooking channel, here's a recipe for scallion pancakes that cuts somewhere in the middle of the light green section:

If you watch videos from that channel (almost all of which incorporate scallions or something similar), you will see that many different choices are made. If you are going for a garnish, only the dark green ends would usually be used, but sometimes you do see the method of julienning the lighter part and blanching in ice water to cause them to curl up, then using as garnish. Sometimes the entire length is used, chopped into sections 1-2 inches long, or sometimes cut on a diagonal. It's really up to you and what you prefer and what recipe you're making, scallions are extremely versatile!

It depends on the recipe, but most commonly I would cut across the whole bunch where the lowest clearly green part is. In your photo, that would be about 1/3 way down from the top of ???. I would call the part above the cut green and that below white. It depends somewhat on the recipe. If green color is a distraction I will cut off more greens and probably not use them at all. Try it and see what you like. One of the great things about cooking is you do a lot of it. If one dinner isn't perfect, you will learn and the next will be better.

23
Are Chives and Green Onions the same thing?
13
What's the difference between green, white, and red onions?
6
Green and white mold on dry part of onion only. What to do?
13
How well does it work to just throw in all the ingredients and boil?