How can I thicken/firm up this caramel?

At the weekend, I made millionaire shortbread according to the recipe in Nigella Lawson's "How To Be a Domestic Goddess" (the full recipe is below for completeness). For the caramel part, Nigella uses a microwave and the instructions are as follows:

Melt 200g of butter in the microwave (in a large microwavable bowl) for 2-3 minutes, then add the condensed milk and golden syrup. Whisk the mixture well until the butter is thoroughly incorporated. Heat for 6-7 minutes until it is boiling, stirring thoroughly every minute. [...] It's ready when it's thickened and turned a light golden-brown.

Now the result of this is delicious, but it is far too soft for millionaire's shortbread, and it squishes out the sides when trying to eat or cut. My partner has also made this recipe with the same results.

I don't really understand the science of caramel, so I'm not sure what to change to get the results I want. So I have a few questions: 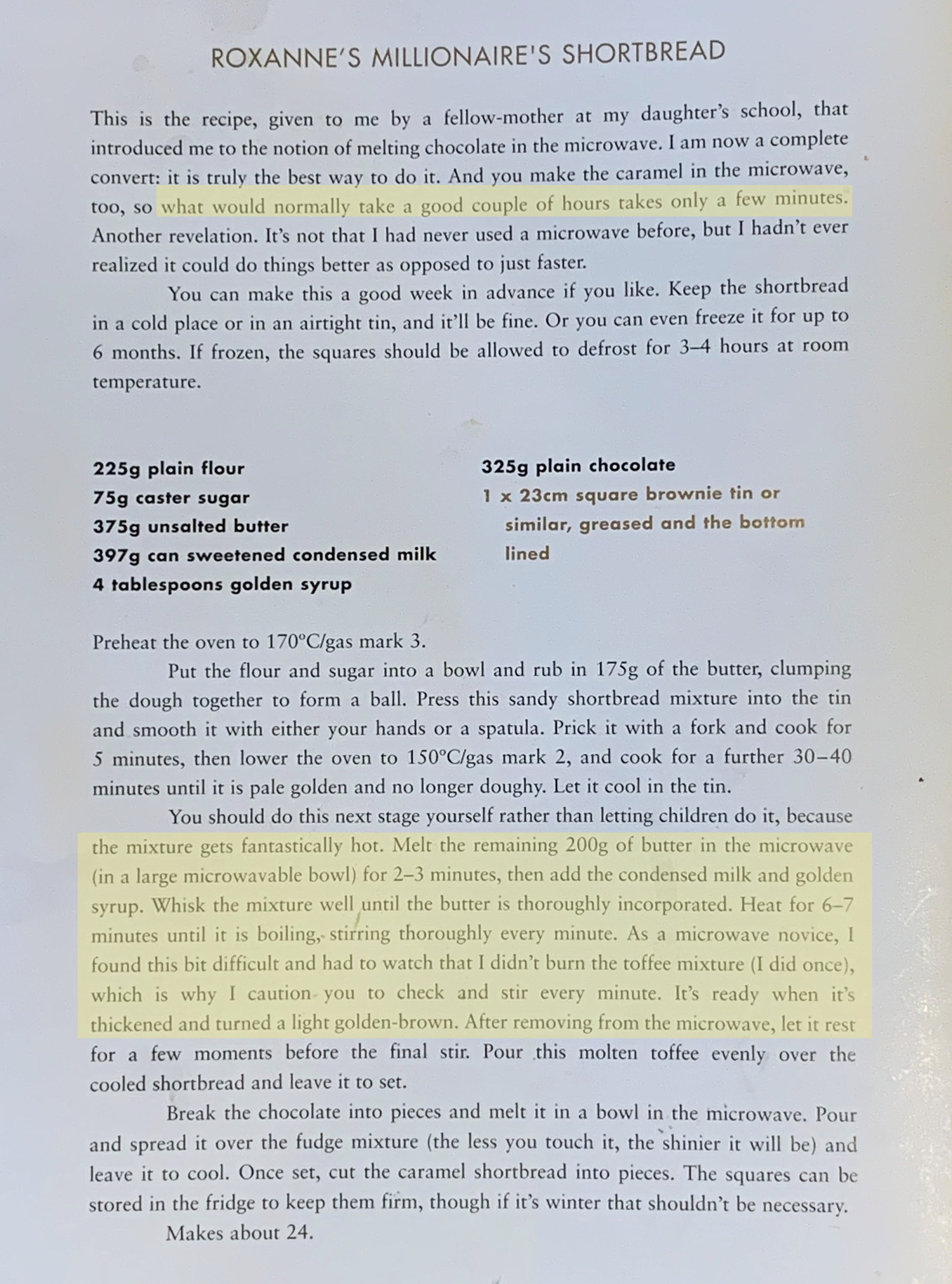 The problem with quick caramel recipes is that they aren't reliable due to the variations of water content in the butter and brands of condensed milk. Butter can vary between 15-30% water, if your butter has more water the caramel will be looser.

The way to fix it it to simply cook it down longer. I personally think the microwave method is a bit gimmicky, all the opening and closing of the door and stirring doesn't save much time or effort. I use the same ingredients and cook them on the stove as it is the condensed milk which is the secret to the quick caramel, not the microwave. Cook it high to get the color, then low to thicken it until you get the right consistency. A wide pan helps with this as it increases the surface area for evaporation. It really doesn't take that much longer, just a few minutes in my experience.

If you are in a hurry reach for the cornstarch and add in small amounts of milk cornmeal slurry until you get the consistency you want. This will do the job but won't have the same strength of flavor as if you cook it down to thicken it.

First off, to fix the caramel, I would recommend microwaving it a little bit longer. Start with an extra 30 seconds, then take a small amount and spread it on a cold plate to let it thicken and test it that way. Microwaves do vary, as does the moisture content of butter and even sweetened condensed milk, so the timing will naturally vary as well.

The type of caramel you're making is a dulce de leche. Dulce de leche involves cooking milk and sugar together until browned, so the "sugar" as we think of it, which is typically sucrose, doesn't actually caramelize at all. The milk, or rather its lactose undergoes the maillard reaction instead. You mention the "standard" caramel and I assumed you were referring to the sucrose-based ones, but dulce de leche is just as much of a standard, which is why I include this paragraph.

A popular way to make dulce de leche is to take a can of sweetened condensed milk and simply simmer it in a Crock-Pot for several hours, which might be the sort of process Nigella's referring to. Dulce de leche does typically take longer to make than other candies, but you are correct that it doesn't require hours. The large proportion of milk solids makes dulce de leche more prone to boiling over, burning, and curdling, and it doesn't have to reach the same high temperatures in the first place. As a result, it benefits from a lower, slower cooking process. Even so, it's quite possible to make dulce de leche 100% from scratch using milk and sugar in less than an hour on the stovetop. It just requires a fair amount of stirring, and you might have to strain it at the end. Using sweetened condensed milk at the start reduces the required time even further.

Having said that, you could totally make your dulce de leche on the stovetop as well, and have an easier time testing it to see if it's at a consistency you like. But if you try it, you will need to pay attention in case it boils more vigorously or wants to stick and burn to the bottom. Any difference in results between using the microwave and stovetop likely depends more on your comfort-level with each tool, and quality of your appliances (my apartment's microwave is trash, personally, so I always go stovetop, but your situation could be different.)

The ratio is quite far off, I would say. 397 g of sweetened condensed milk (which has about 80% water) to 100 g syrup (which is about 20% water itself) makes for about 140 g sugar to 340 g water (the rest being other solids from the condensed milk), this is even wetter than the 3:2 ratio frequently used for slowly-evaporated stovetop caramel.

The easiest thing would be to find a different recipe. But if you want to invest the effort needed to re-engineer this one, I would start by replacing part or all of the sweetened condensed milk with powdered milk and powdered cream and go from there.

Not the answer you're looking for? Browse other questions tagged microwave caramel or ask your own question.

2
Turtle Caramel Turns to sugar
5
What causes curding in this case: heating milk with large quantities of sugar
2
Why doesn't my caramel sauce thicken?
3
Why didn't my apples caramelise?
8
Why does microwave popcorn burn?
3
Scraping Caramel for Flan
2
Are poppers better than a paper bag for making popcorn in microwave?
5
Why do I have lumps in my caramel? (NOT crystallized sugar.)
6
Caramel made with coconut milk tastes burnt
1
Bitter shortbread - what to do with it?