What are ‘fresh noodles’ in a salad

I am missing my favourite salad. It’s 5 hours from my house so I am stuck trying to recreate it at home. It’s called an Asian Goi Mi Salad. As you can see by the photos it’s loaded up with yummy stuff. I will be able to figure out how to create most of it but the ‘fresh noodles’ has me hung up. What type of noodle are they? They were tasty and I would love to include them.

Here’s the ingredient list and hopefully you can zoom in and see the noodles (there’s bean sprouts in there too). 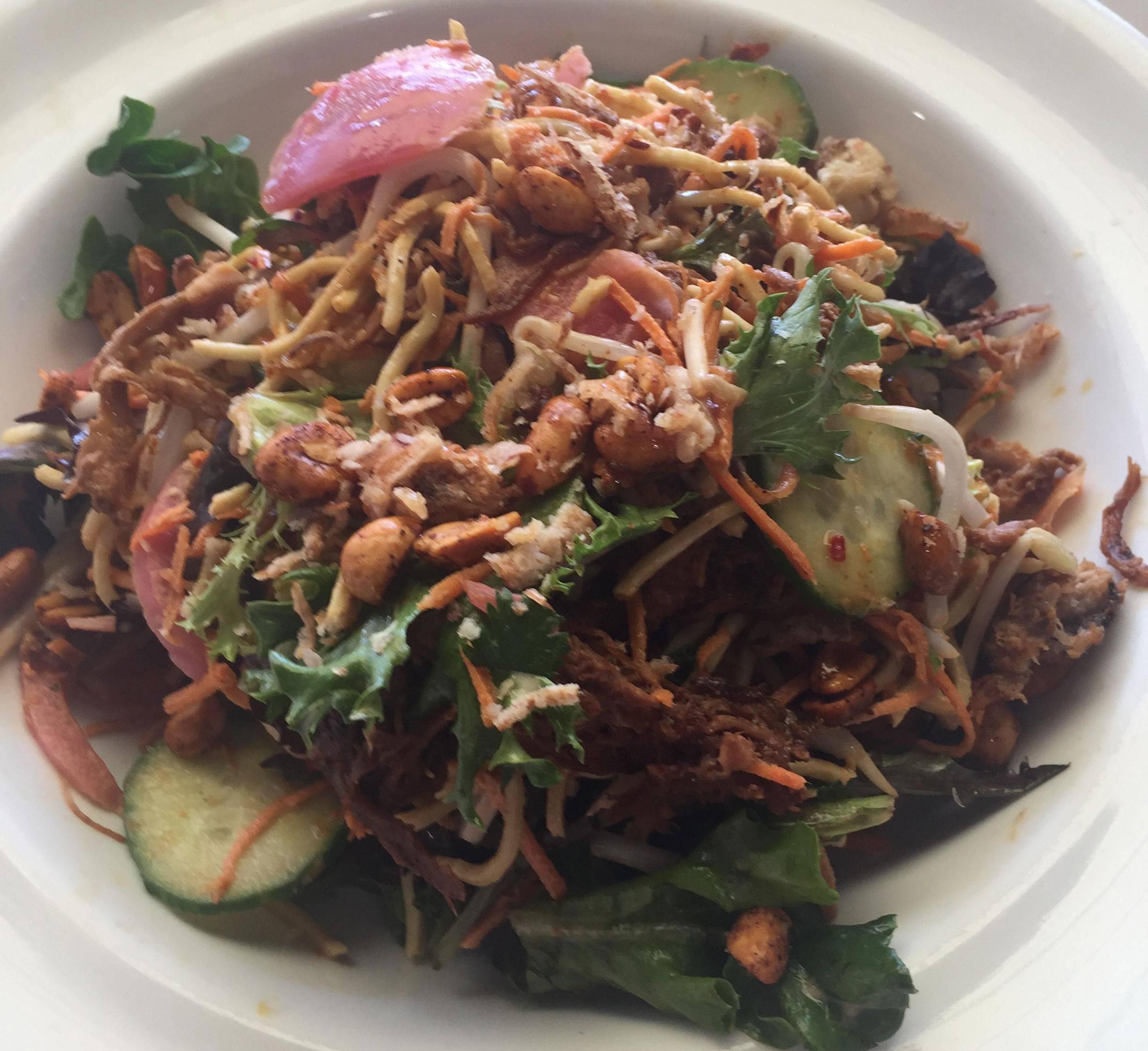 Fresh - as opposed to dried.

Specifically in the UK, 'noodles' can only be Chinese/South-East Asian. Pasta is pasta, it is never called noodles over here, so we don't have the confusion the US has with the term.*

Fresh noodles you can find in the supermarket, usually refrigerated slightly, in with the 'delicate veg' section - near mangetout, pak choi, beansprouts, chillies etc.

There are usually a minimum of three types, The one you want will be just labelled 'Chinese noodles'[1] [pretty much the same as fresh spaghetti, made of durum wheat but has been through a fermentation phase giving a darker yellow/brown colour & stronger flavour, then tossed in oil to prevent sticking] alternatively, rice noodles [usually very skinny, vermicelli, very white, less oil] & then the bright yellow, pre-flavoured, Singapore noodles [again rice vermicelli but with 'flavourings' (avoid;)]

If you can't find them in the fridge in your store, then second best is 'vac-packed' which will be near the 'insta-food' sauces - [pad thai in a bag, just add chicken] type of things. These are similar to fresh, often with monikers like "straight to wok" etc. They're nowhere near as nice as fresh & always look to me more Japanese than Chinese, as they're quite white by comparison, so possibly not fermented].

If you can't get either of those, then it's back to dried. Soak in hot water 5 minutes, stir-fry.

Sometimes, I actually prefer dried. It depends on what I'm making.

The difference is very similar [unsurprisingly] to fresh vs dried Italian pasta. Some dishes are OK using dried, some have got to be fresh. Fresh doesn't have the bite, or al-dente that dried has. Just the same with noodles, except the 'bite' can often be slightly more rubbery [not in a bad way] compared to pasta.

One additional tip - you can pretty much pick the strength of flavour in dried noodles just by the colour. The browner they are the stronger the flavour [assuming no-one cheated & put colourings in them.]

If you're really really stuck, ramen noodles are very close to 'Chinese noodles' but only if they're good ones. Most ramen in cheap foil packs you can't see what's in it until you open it. Avoid unless desperate ;)

*Just to keep a balance, we have many other things we can get linguistically confused over… coriander, chili, to name but two ;)

[1] After comments, it's quite likely that these would be called 'chow mein' noodles in the US.

Not the answer you're looking for? Browse other questions tagged noodles or ask your own question.

2
How do I make Pad See Ew with Fresh Rice Noodles
4
What sort of rice and noodles are “brown rice” or “brown noodles”?
9
Do fresh ramen noodles come in a curly form, or only instant?
16
Turning regular noodles into no-boil noodles
1
What type of noodles absorb most amount of liquid?
4
Boiling vs soaking rice noodles
1
Fresh pasta noodles in lasagna
7
How can I separate fresh rice noodles that are stuck together?
1
Preventing Noodles from Sticking to the pot