I bought silicone ice cube forms and when I used them something white swam on the water. I guess some silicone that dissolved from the form.

First I made ice three times and threw it away, but the problem persisted. Then I tried to put them in the dish washer. Now I bought another product from a different manufacturer and the problem is even worse.

(I am NOT 100% sure if they may still be products from the same factory or made in a similar way, but I explicitly tried to buy another product)

Are silicone forms just crap, am I doing something wrong, or is there a good way to clean them before the first use? 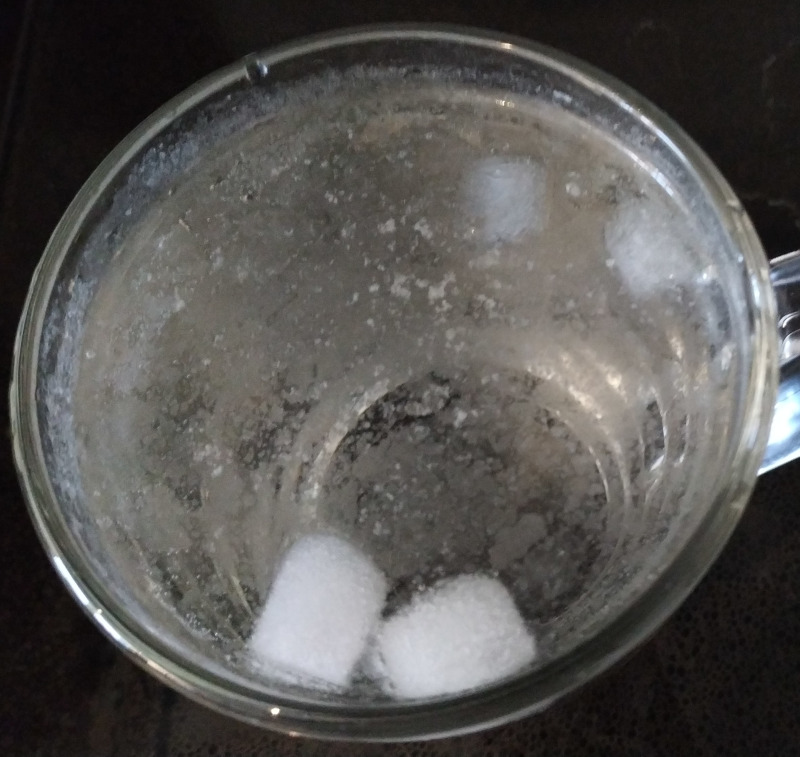 I do not have the problem using the same tap water with the hard plastic ice cube maker that came with my fridge. The general water quality here is quite high and I even use the water with a sodastream and making tea in the same glasses and it looks perfectly clear.

Before freezing the water looks clear as well an I do not see such dirt even when I let a glass of water stand somewhere.

Update: I made an experiment by freezing one form with and one without lid. Here is an image of the forms and the lid: 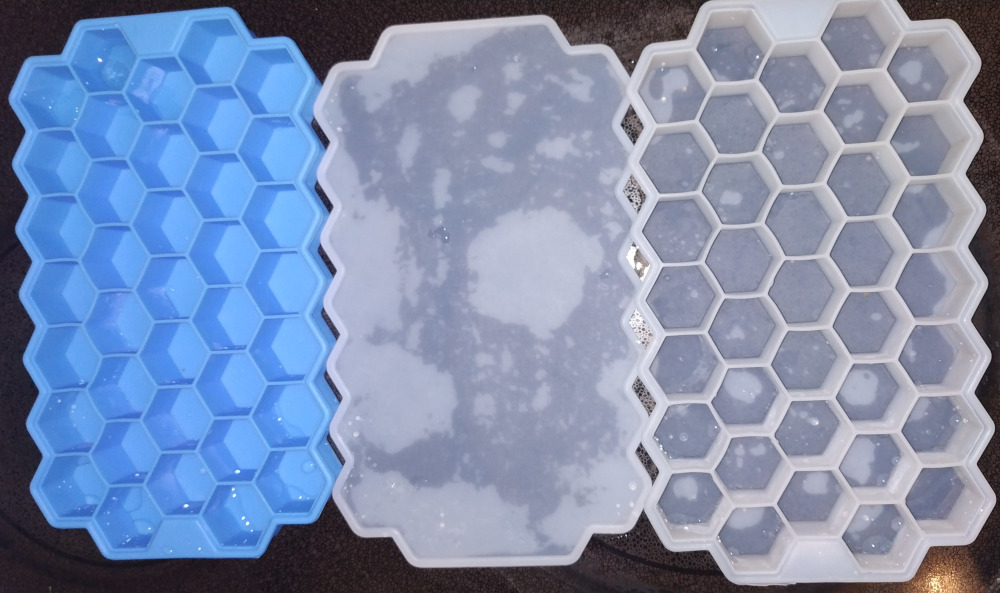 The blue one was used without lid. They seem to be both silicone and the lids are all the same, only the forms have different colors.

The result after dissolving all cubes looks like this:

Left: blue form without lid (Little dirt, but still too much)
Right: white form with lid (Larges flakes of some dirt)

The cubes in the open form were quite easy to remove and well-separated. The lid stuck a bit on the cubes and I needed to break the cubes apart by bending the silicone, because the lid hold the water surface flat.

The open form stood on the closed one.

Update 2: Boiled water has the same problem. I'll try a water filter next.

Update 3: Water hardness as published by my water supplier:

Update 4: Same result with the water in another city (unknown hardness). In some of the forms white sediments after the water rest dried. Next I try a water filter.

I tried a water filter and got the same result.

Using a water filter I still get white flakes like in the right glass after melting all 24 ice cubes of the new form (not the one pictured above, but also silicone) with lid.

Silicone does not dissolve in water.

The scum you see floating on the top looks very much like lime-scale. This is in your water supply. It will also give you an encrusted kettle & white/grey blobs stuck to the nozzle of the hot tap after some time.

You could try distilled water, or invest in some kind of hard water filtration system. As mentioned in comments, using cooled, boiled water may also help a little, as the boiling will drop some of the calcium out of the water… & stick it to your kettle element instead.

Many places in the world you can enquire with your local water company as to how hard your water supply is - how much calcium, basically - & they will advise on softening methods.

Hmm it looks like ot could be from the ice, not the silicone. Have you tried filtered or mineral water as a comparison?

Looks like it is from your water containing certain (non-harmful) elements and not the silicone.

There are 2 solutions for you to try to get better ice cubes.

Supposedly from what I have read, the minerals in the water calcify and stick to the silicone, and is supposed to be completely harmless. For me, if it's harmless, I don't care what it looks like and just run with it. You could try washing using a Zero water filter to make the ice and see if that helps. It supposedly removes particulates completely.

3
How to clean non-sticking pan from burnt pepper juices
10
How do I clean this silicone tray?
13
How to clean and maintain cast iron lids
15
How should I clean my metal mesh tea strainer?
57
How do I wash the "pokey" side of a box grater?
1
Is it safe to use glass cooktop cleaner to clean and polish stainless steel pots?
3
How to get Garlic & other strong Spices' smell out of my Zojirushi Flask/ Thermos acquired via a herbal Immunity decoction?
7
How to clean caked on stains from juicing vegetables?