Sourdough bread uncooked from inside

My sourdough starter is 9 days old. Today it doubled in around 6 hours.

First of all, the bread is barely edible. The bread developed a tough layer of crust on the top which is really hard to bite on. The inside is soggy and barely has any bubbles. Also, the exterior colour is blackish instead of brownish.

Also, the crust developed a crack below and expanded around it. It didn't expand around the scar I gave it on the top.

I'm adding some images for enhancing the context:

What can I do to improve my bread? Although it looks brownish, really it's very burnt color. 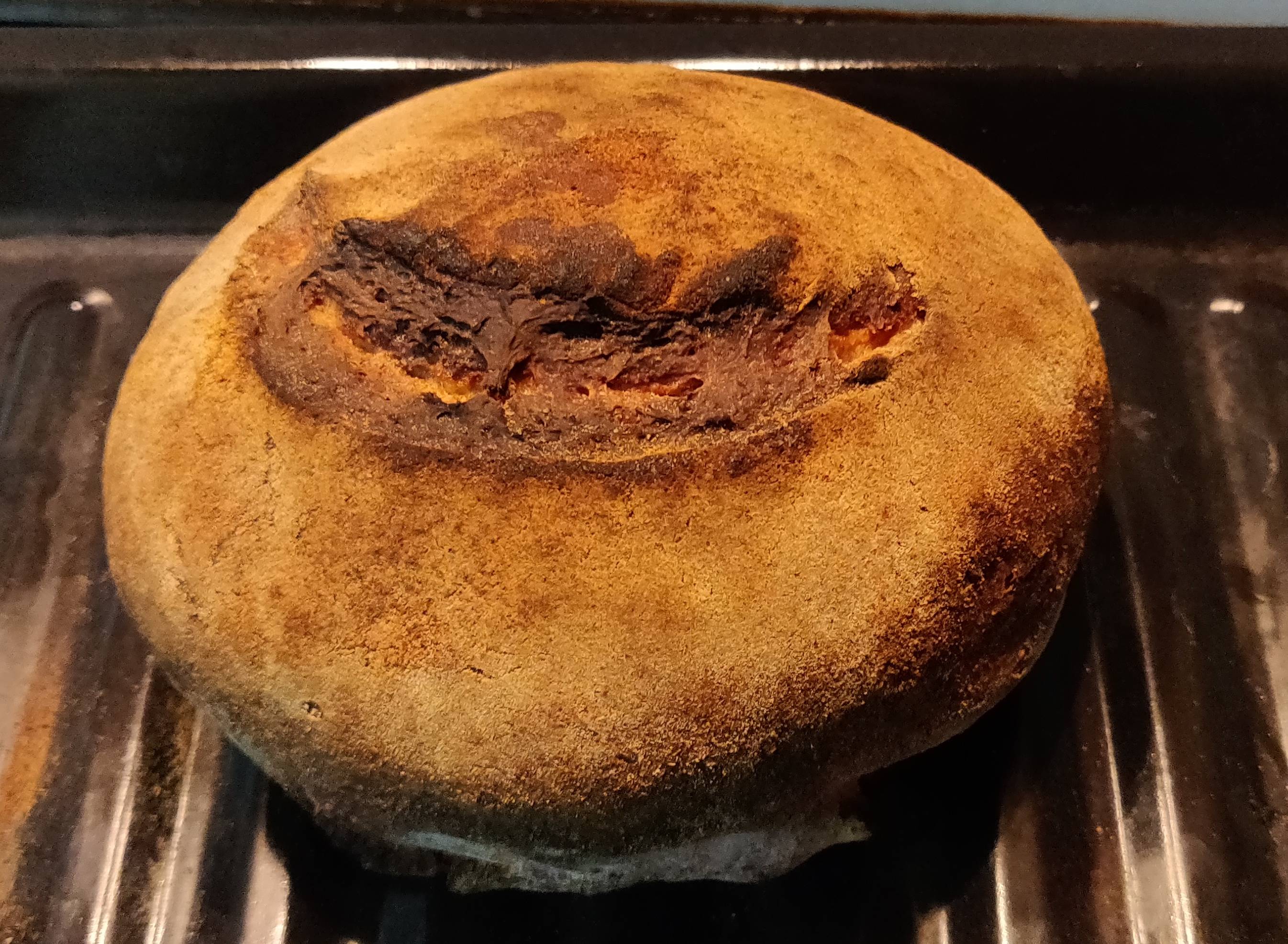 The crack that was developed on bottom. 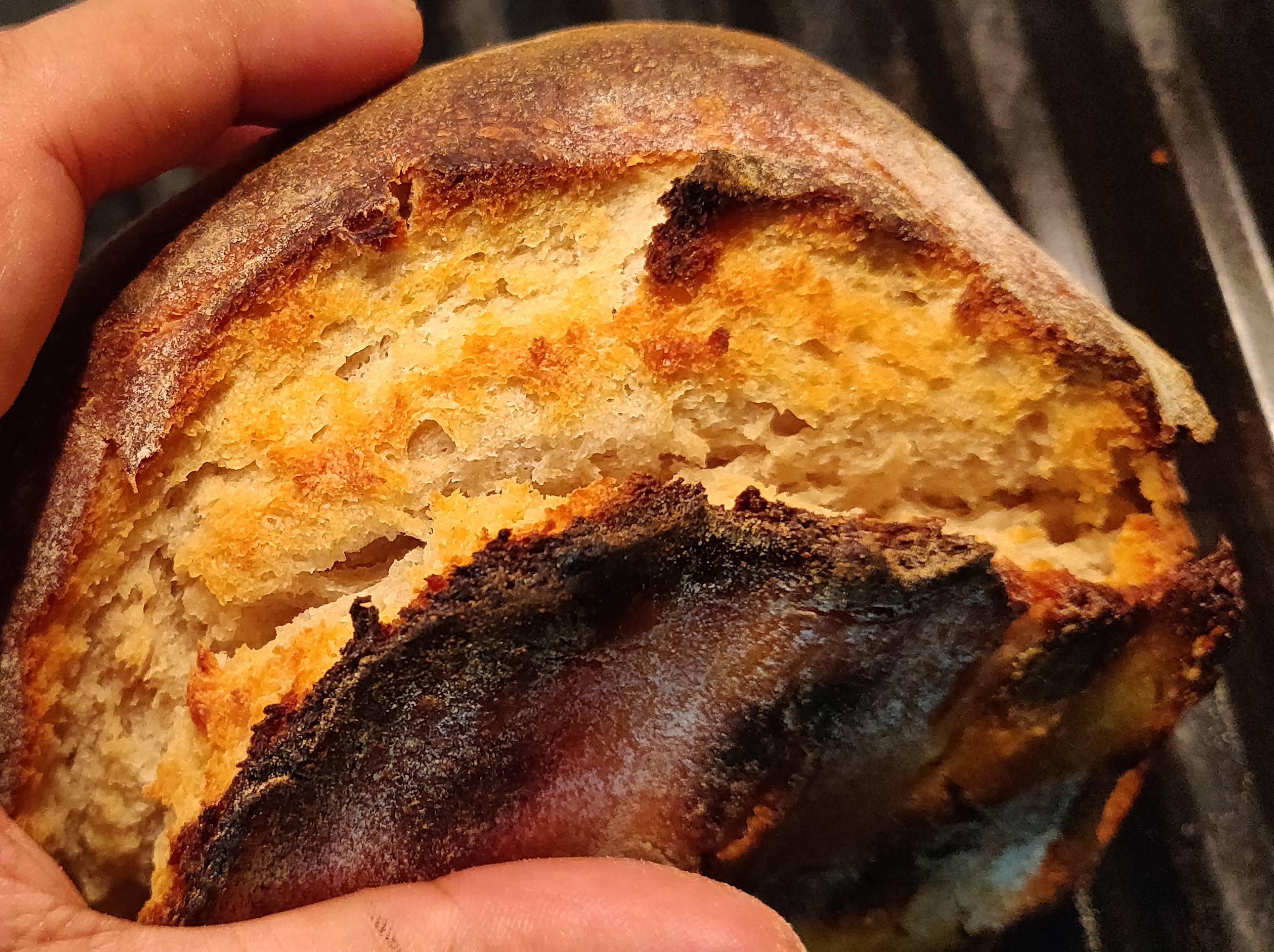 According to Chris's recommendation I made following changes:

I did one more thing, kneaded bread for around 40-50 minutes. I think this is a bit too much, but I did this since I couldn't see the window pane effect as described in the video.

Below I'm stating the improvements and lacking's the bread has.

Observations: The top of the crust still has a burnt texture. To steam, I put a container with boiling water beside my bread. Usually it get split around the bread which might be the reason my bread has a nice colour on the bottom. I think the steam is not reaching the crust. Should I spray the bread for steam creation next time? (So that it reaches crust as well). 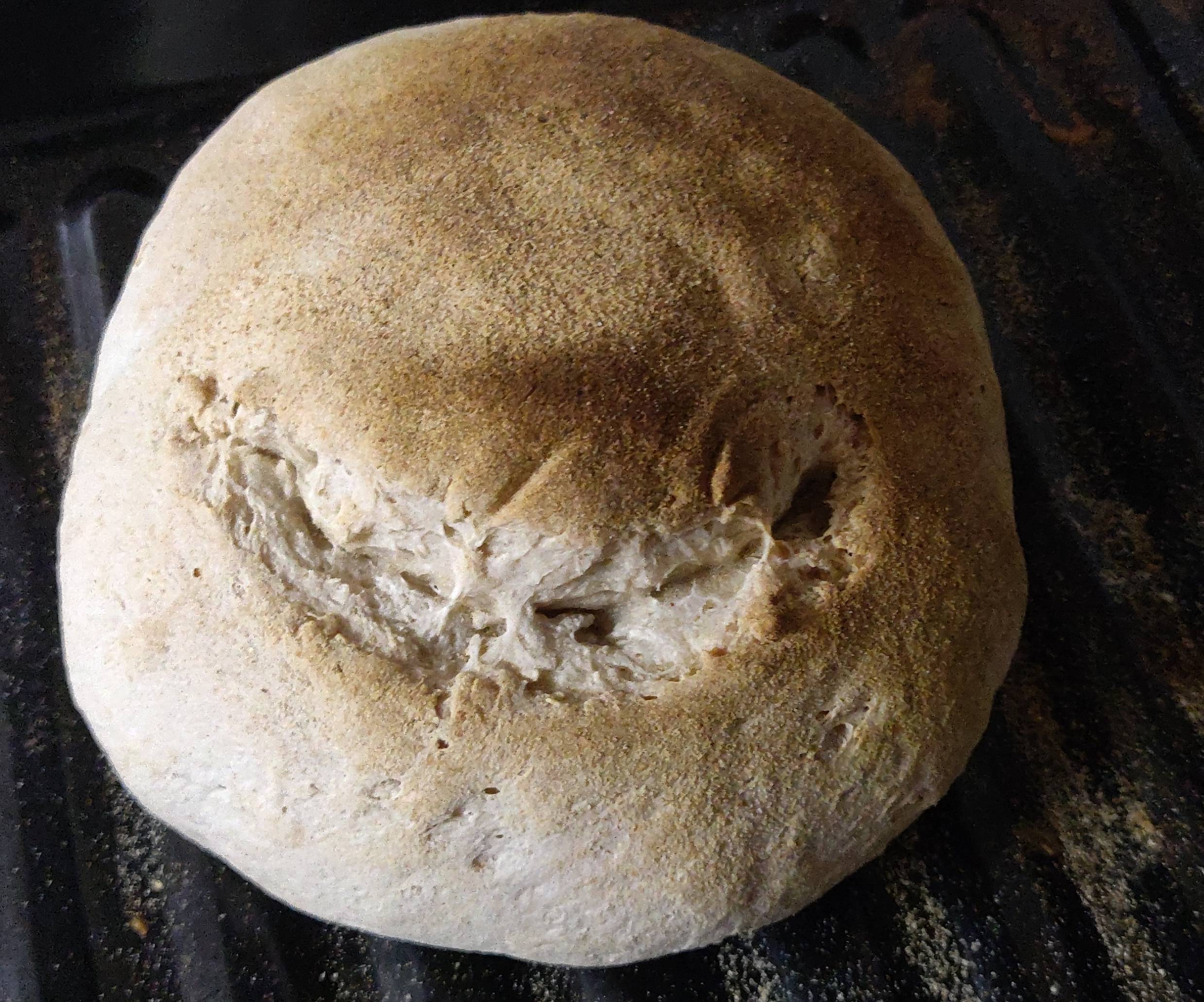 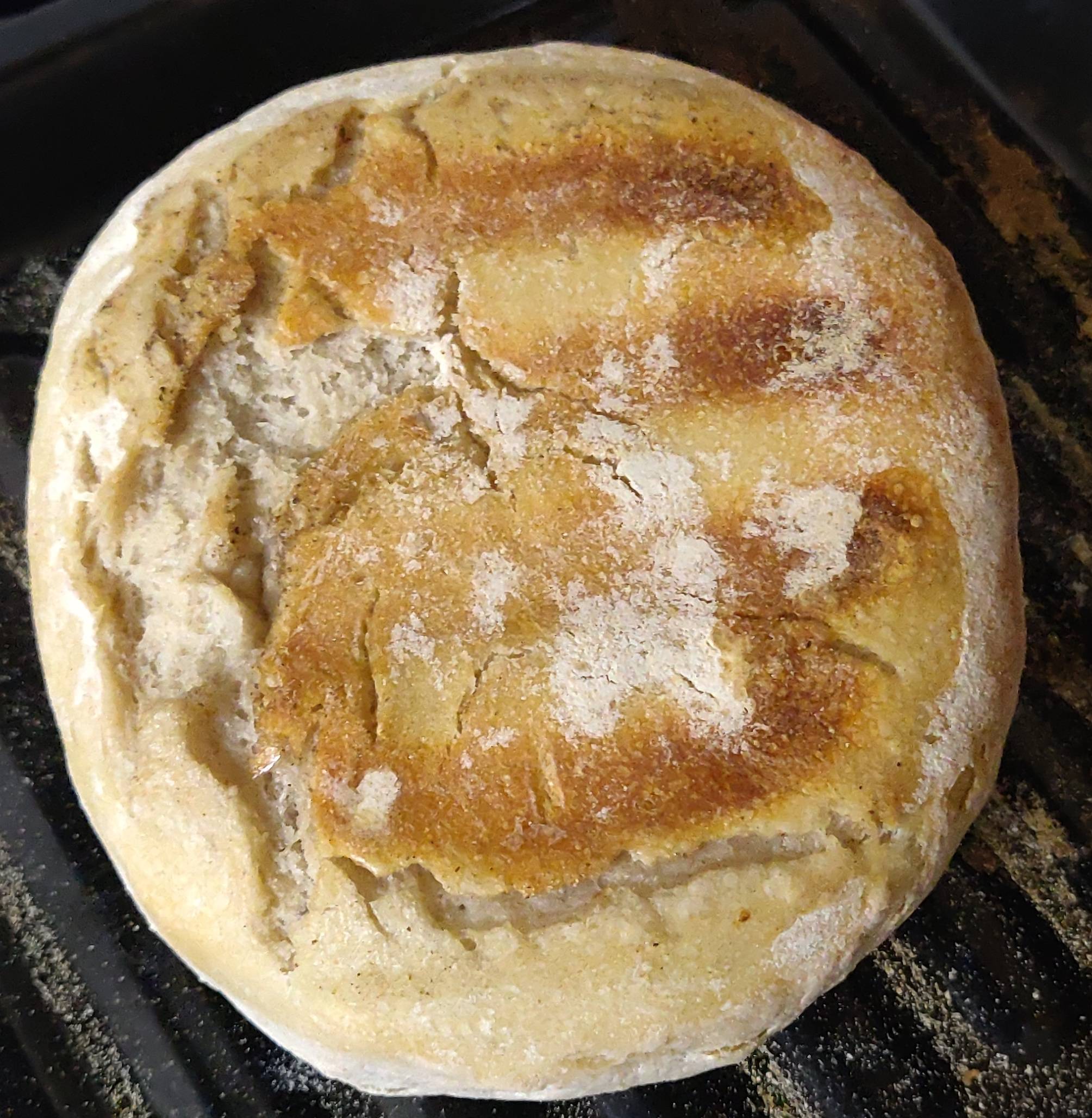 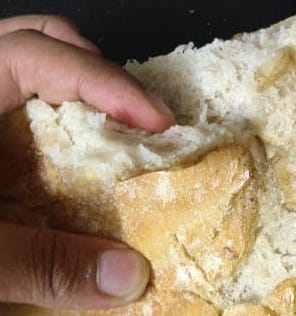 ^The bottom of the crust can be easily peeled off from the rest of the bread.

Mine takes 40 minutes for 500g flour, just under 70% hydration. That's in preheated cast iron, with the lid on (and wetted inside) at 240C for the first 20 minutes, then down to 180. The hard crust seems like too hot to long, possibly too much top heat too.

Did you let it cool (almost) fully before cutting and tasting? If I'm impatient, it seems doughy and underdone. The absolute warmest it should be when you cut it is just warm enough to soften a little butter. The inside looks OK to me - a closer crumb than you might have been aiming for but better for sandwiches. I'm prone to handling mine too much or too roughly and knocking some of the air out as I transfer it to the pan, with this effect

Next time try turning the oven down a bit when you take the water out. To avoid wasting this loaf, if it still seems underdone when cold, toast slices of it (probably leaving the crust) and eat hot with butter.

I make a sourdough with a very similar recipe to you, perhaps fractionally drier. I bake mine at 230C for 25 minutes covered and 20 minutes uncovered at 200C. On the occasions I forget to turn it down it is verging on burnt.

Mine takes a full 24 hours from mixing to baking, so I think you may be rushing the bread.

If I knead mine at all, barring the bare minimum to render it mixed, I end up with a sticky mess that fails to rise much. That's partly due to how long mine ferments, but you can overdo the gluten development, leading to stickiness. I followed all the tutorials, setting timers to knead for 20 minutes, doing 300 'slap and fold' movements, stretching the dough every 20 minutes... all of them rendered the same overworked mess for me, although they seem to work for others.

Now I generally mix my dough until it is 'shaggy' then cover and leave it for 15 minutes or so and then give it a few turns in the bowl. That is usually all it needs to create a smooth dough, though it is far short of 'windowpane' at that stage. This isn't technically an autolyse, because I have my starter and salt in with the flour and water, so you might want to experiment with a proper autolyse.

I would suggest you read up on 'stretch and fold', but also be prepared to experiment with being more 'hands-off' your dough.

You let it prove for a total of 8 hours. That might be fine, but it might also depend what temperature the space it was proving in was. My kitchen in Northern Scotland tends to the cool side, so my bread always gets left overnight, despite many sources saying you can make sourdough in 4-8 hours I have never found that to work in my circumstances.

This site gives a table of fermentation times by temperature, suggesting 6-12 hours for 'room temperature'. However their 'room temperature range is 21-24C, which is warmer than my kitchen typically is for most of the year, tending to hover at about 19C unless I have the oven on. So be prepared to experiment with both temperature and timings to get the best out of your dough.

and have patience while you wait for your starter to mature and come into its own, it's only a baby yet. My bread was much like yours when my starter was new, but as the starter and I both found our feet the results improved and became more consistent.

Not the answer you're looking for? Browse other questions tagged baking sourdough sourdough-starter proofing or ask your own question.

6
What are the advantages of "bathed" bread?
6
Why won't my sourdough form a shapeable dough that doesn't stick?
3
Chewy, Moist & Bit Uncooked Bread
7
What caused the crust on on the top of my bread to separate from the rest of the loaf?
3
Bread cracks in the oven
0
Sourdough dough collapsed, not rising again... Need help!
1
Sourdough bread crust will not rip open
4
Bread dough flattens during final proof & almost no oven spring