What other cookies/biscuits were traditionally baked in shell shaped forms like this one?

This is an old form I got from my German mother-in-law, here in Southern Germany. It is 10 cm (~ 4 in) long and 5 cm (~ 2 in) wide at the widest part. From the double shell shape, it appears to be a madeleine mold. Were there any other uses that someone knows of?

And yes, I use it to make southern German "Bärentatzen" - or "bear paws". I am just wondering if there is another use or two out there, since it looks so much more like shells than like paws :)

It’s not a perfect match1, but considering the region and that you apparently have just one or a few, I would assume that this is a slightly unusual mold for “Bärentatzen“ („bear paws“), a classic Swabian Christmas cookie. 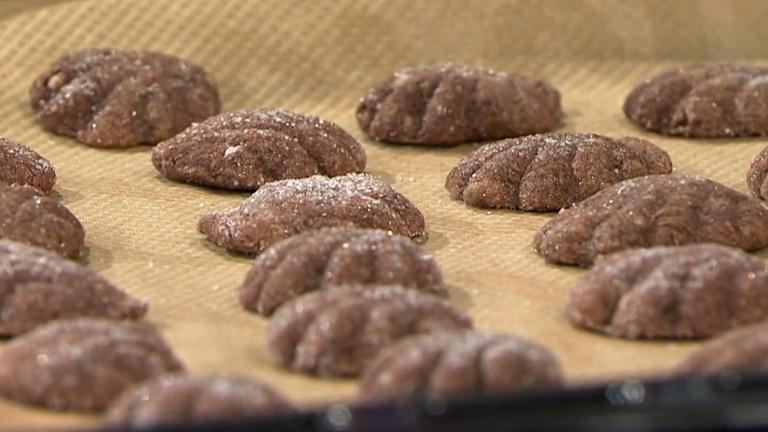 A soft but stable flourless dough made with whipped eggs (or just egg whites), sugar, chocolate and almonds is first shaped into balls, coated in sugar, and then pressed into a wooden or metal mold just to shape them. The sugar prevents them from sticking and they are baked not in the mold, but free on a baking sheet. If you look closely at your mold, you’ll see that there is none of the slight polymerized grease residue that suggests that it was ever put into an oven.

Molds are traditionally made of wood (“Model”), usually beech or other hardwoods, but I have seen tin ones as well - the metal ones were more common in the earlier 20th century (pre-WW I&II and shortly after), but often had problems with the material suffering over time. Wooden ones are seeing a comeback in recent years.

Bärentatzen are pretty local - older Swabian cook books have them2,3, in the rest of Germany they are virtually unknown or mean another type of cookie closer related to spritz cookies. Food historians have suggested that the original shape was supposed to be scallops or seashells (think the religious symbol of the pilgrimage) and that the reference was lost at some point. The alternative name „Schokoladenmuscheln“3 („chocolate scallops“) is another indicator.

1 Typically Bärentatzen would be single shells. The baking equipment company Staedter sells a wooden version of a double shell and of a single shell as „Spekulatius mold“, which is in my opinion imprecise as Speculaas are traditionally very flat and at least the single one is sold as „Bärentatzen“ by Birkmann, another baking equipment supplier.

It may not be a cookie mould at all

Throughout Europe, blancmange was a traditional dessert from at least the Middle Ages. Its popularity has varied, but certainly in Britain it was relatively popular until the 1970s or so. England also has a tradition of set fruit-flavoured jelly desserts. Other similar desserts exist elsewhere.

These all require the liquid mixture to be poured into a mould to set. Decorative moulds (usually made of metal) have been used for these for centuries. It is quite possible that your mould is not intended for cookies at all, but was actually intended to form a moulded bow. This may have been for an attractive small dessert, or as a decorative feature on top of a larger dessert.

Someone on Etsy is selling a 1940s swirl mould intended for set desserts. It is not exactly the same as yours, but there are definite similarities. 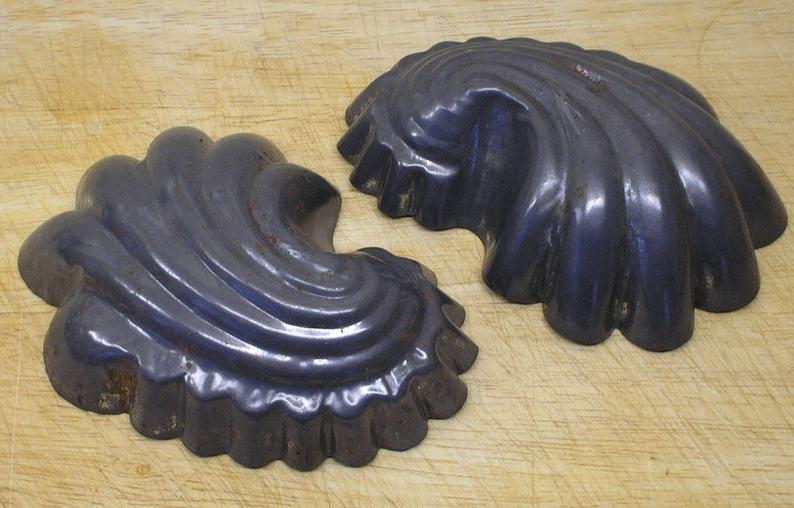 I’m from this region and cannot imagine anything else than Bärentatzen for it. As someone already said, it would not make sense to put such a small mould into the oven, and I suppose that, if you want to have a pattern on Madeleine dough, you would have to bake it inside the mould. To me, I’d say it’s an invention to become twice as fast in doing them. Could use it now - the ingredients are waiting in the kitchen :) Best, Stefanie

Not the answer you're looking for? Browse other questions tagged baking equipment cookies or ask your own question.

1
Is there a way to save cookies that were baked without flour?
5
Do breads always have to be baked in some vessels in an oven? If yes, then what shaped vessels would those be?
9
What kind of cookies can be shaped?
5
Why do Pocky and other "stick" biscuits have this distinct burn pattern?
2
Why did my cookies come out like this?
1
What is this spoon-like kitchen utensil with a rubbery head and wooden handle called?
1
Biscuits (cookies) turning out more cake-like than biscuity
27
What is this one-handed tool with five dull steel "blades" called?
23
What is this old "lemon-squeezer" shaped pan
28
What is this oddly shaped hinged device with indentations?