How to make vegetarian meat substitute that's more firm and browned on the outside?

I've eaten in some vegetarian places where they use what I guess are TVP (textured vegetable protein, i.e. soya) chunks as a substitute for meat, which was quite convincing. One place made them into 'gyros' chunks: 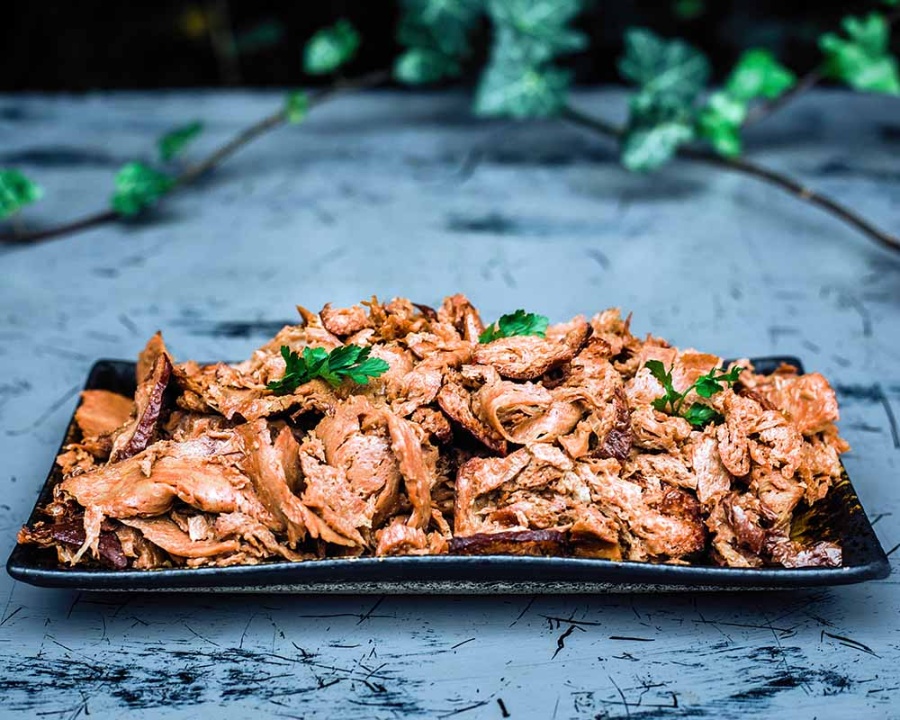 Other place made it into 'duck' that was somewhat similar, but more dry, which was appropriate as a substitute for poultry, it had kind of a stringy texture inside and a crispy dark outside 'crust'

I've bought some TVP (chunks) to make at home, the recipe says to boil them with some water or stock for 15-20min, press out the excess liquid and use in a dish. However, when prepared this way they are still pretty soggy and too soft. I've tried marinading them in teriyaki + spices, but the marinade also makes them soggy. Frying in oil doesn't make them crusty (just kind of burnt in places and untouched elsewhere), and as soon as I put them in any dish, they soak up the moisture back and become just bland squishy bits.

I've heard you can bake the chunks, but I'm not sure if it's true, or what the parameters could be.

Also, I guess it's possible that what I'm looking for is not soy TVP, but some other meat substitute instead.

In my experience, you will not get TVP nuggets by themselves to ever have a chewy, crispy, or meaty texture. However, there are some other products you can use that allow you to have better texture.

One thing you can do is to mix rehydrated TVP with wheat gluten, and then knead it to develop texture. Wheat gluten is the chewy part of bread, and when kneaded develops into long, tough strands, adding chew and texture to your meat substitute. Many of the "vegetarian meat" items that you find in Asian grocery stores are primarily wheat gluten. The ultimate form of of fermented and kneaded wheat gluten is seitan, and you can also buy this directly to make things from it.

My own experiments with making fake breakfast sausage show that a combination of products is generally necessary for best texture. Currently I'm using TVP, wheat gluten, and dried and rehydrated mushrooms. I may experiment with adding oats soon. Good luck with your vegetarian experiments.

I've never seen a TVP that required boiling it. I made two types yesterday (one made in Poland in shape of pillows and one from Jordan that look like minced meat) both called for soaking in water with dash of oil or broth OR soaking in water and after 20 minutes squeezing the excess and then adding some fats.

The point is that I never seen (or heard) about boiling the soy in stock. I don't think that help water penetrate better. I think it might be a part of required heat treatment. Then I would move that to the frying/roasting stage so you would get the most of heat.

To get a bronzed, chrunchy parts I just leave the soaked bites in oven with a light on for 30 minutes. So the outside is damp. I would describe it as "not dry".
Then toss it at skillet with very high temp and treat like regular meat. The thing here is to have enough oil to fry it but small enough so they can touch the pan itself and get burned a little

Not the answer you're looking for? Browse other questions tagged substitutions vegetarian soy or ask your own question.

9
How can I make vegetarian marshmallows?
13
How to make tofu that is crispy and flavorful outside and soft inside?
7
How can I make a vegan turkey-skin substitute?
2
How to plan the portion size for a vegetarian bourguignonne dish?
4
How to substitute chicken broth in a vegetarian soup?
6
What are the difference between outside and inside skirt steak?
4
How to make beans more neutral tasting?
1
How should "vegetarian duck" (seitan) be pre-prepared to substitute into a duck recipe
4
What are the ingredients that make vegan meat taste like real meat?