I am from Germany and I want to cook a recipe that has "English mustard" in it. I don't really know the difference between different kinds of mustard.

For example, the mustard I mostly use here in Germany is this one:

It's just called mustard. Is english mustard something different? Is the one I know more of a yellow/ american mustard or something else entirely?

I’m guessing that English mustard would refer to a mustard with more heat and stronger flavour than American (yellow) mustard. The Brits in my family usually mean Colman’s brand when they ask for mustard, and a little goes a long way. And the jar says original English mustard, for whatever that’s worth. I am unfamiliar with the German mustard you linked, however the ingredients on my container are water, mustard flour (21%), sugar, salt, wheat flour, turmeric, citric acid, and xantham gum. Maybe you can compare? 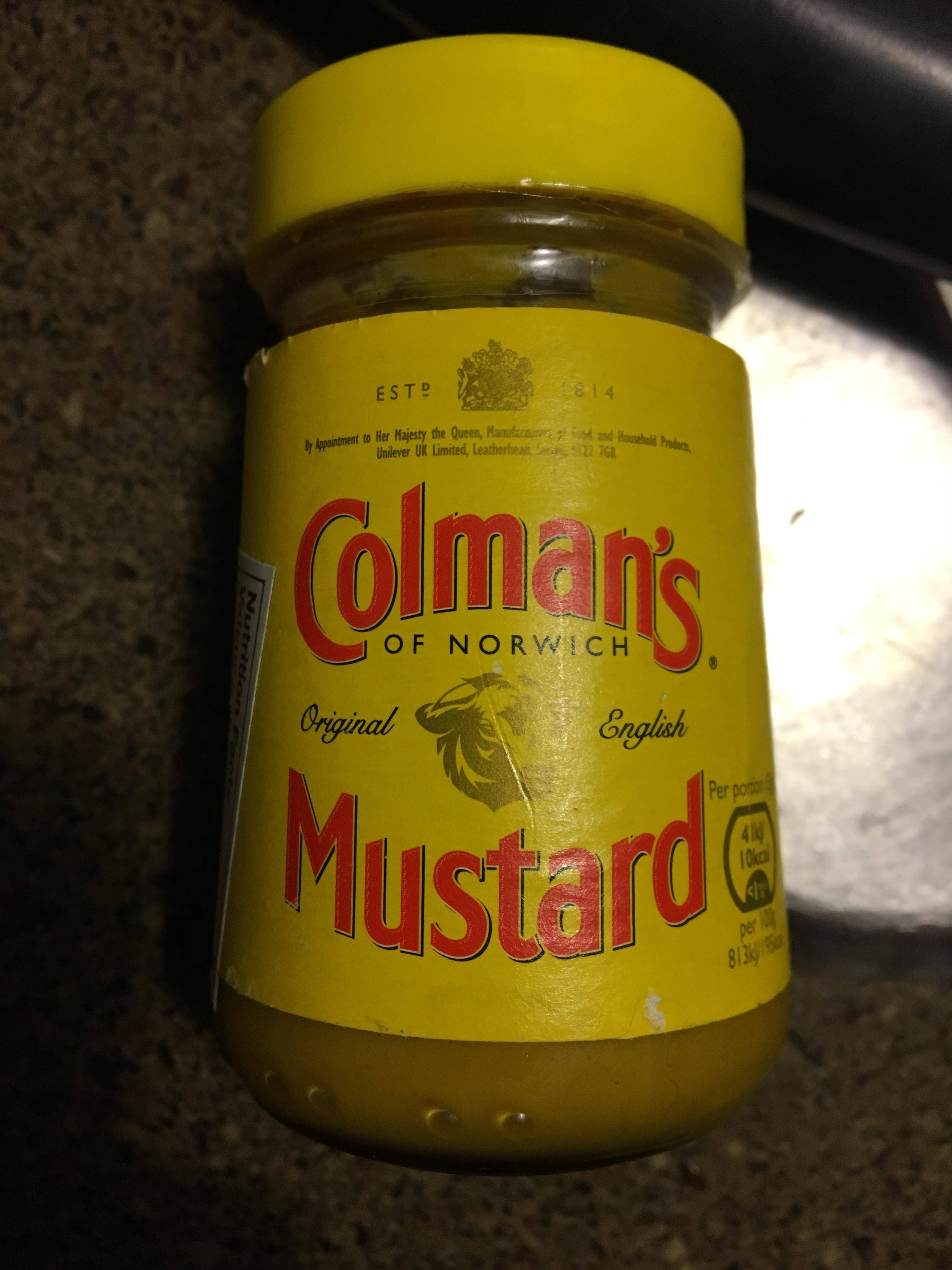 You need something that packs more punch, if you can’t get proper English mustard (the Coleman’s in the other answer is occasionally available in German stores), a Dijon mustard (Maille is a commonly seen brand) will do, or a „Scharfer Senf“ (strong/sharp mustard) of a German brand.

Based on this link and their description of "English mustard"

English Mustard: Made from both white and brown or black seeds, flour, and turmeric.
Usually bright yellow in color with an extremely hot spiciness to the tongue.

and the other answers and comments I wouldn't use Bautzner Mittelscharfer Senf as this one is really mild and not spicy at all. Dijon mustard is always a good choice (imho) but as an alternative I would suggest to use something like the quite common "Original Löwensenf extra" which brings a well-balanced mustard and vinegar taste and a good portion of heat with it. 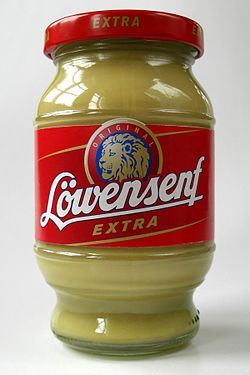 I have found that English mustard has a pronounced turmeric flavour which brings it more in line with horseradish. German mustard is milder taste with a stronger taste of the mustard seeds. The german varieties also seem to have a bigger taste of the malt vinegar.

I might have some details wrong, but I'm working from a text (Arctander) that is somewhat incomplete but way better than a lot of very dubious internet stuff I've been looking at.

So, most importantly, German mustard uses black mustard seeds vs yellow (aka white) seeds in English. The crucial difference is that brown mustard hydrolyses -- when crushed & mixed with water -- to produce the pungent and volatile assault on the senses called Allyl Isothiocyanate ... which is the major component of the mustard oil of commerce, produced by distilling hydrolysed black mustard, and not to be confused with culinary mustard oil that is pressed from white mustard seeds.

Meanwhile, English mustard is generally prepared from white mustard seeds, which -- crushed with water -- hydrolyse to produce ACRINYL Isothiocyanate, and which is also pungent but, unlike Allyl Isothiocyanate, is neither volatile nor a skin irritant.

But there's more. in commerce, German Prepared Mustard is the term for mixing ground black mustard seed with water, vinegar and salt; and English Prepared Mustard combines white mustard seed, water, vinegar and salt. Both of these are more pungent and more skin-irritating than their water-only counterpart, but I don't know if there's some extra chemical reaction beyond the mere presence of acetic acid.

So, basically German mustard is easily hotter than English mustard. except that ... then there's hot English mustard, which re-introduces the sensual assault as "horseradish", which like wasabi contains Allyl Isothiocyanate. and if you didn't know, most of your wasabi is green horseradish paste, but it's the same pungent chemical and genuine wasabi is fiendishly difficult to grow. And frankly, a lot of your hot English mustard is probably lit up with synthetic Allyl Isothiocyanate, which is now the predominant form of mustard essential oil aka volatile oil of mustard. So by venturing outside the species with horseradish or plain honest industrial chemicals, you can make hot English mustard arbitrarily hot while being limited to white mustard seeds. But before you get excited about weak German mustard know that German brands are just as capable of boosting Allyl Isothiocyanate, artificially or naturally, so it comes down to a brand-to-brand comparison, rather than country. But I'll allow that generally consumers expect hot English to be the hottest.

For clarity, only black seeds only are used to produce volatile oil of mustard, only white seeds are used to produce mustard cooking oil, and black mustard seed characterises German mustard but there's a lot of room to fiddle with heat. If your recipe doesn't specify hot English mustard, you probably want any yellow mustard that is milder than hot English but hotter than American.

Not the answer you're looking for? Browse other questions tagged mustard german-cuisine english-cuisine or ask your own question.

6
Is there a way to ferment mustard seeds for homemade mustard?
6
Good book on English/British cuisine
6
What is the difference between whole grain mustard and regular yellow mustard?
5
Why does my homemade mustard thicken only some of the time?
2
Käsespätzle like the ones in Bavaria
2
Mustard substitute
1
Homemade mustard is bland
28
Why is mustard irritating for me?
23
Which regions of the world prefer mustard in their mayonnaise?
2
Using yellow mustard as a soup base