Identifying a type of Pizza Topping

I was looking at the tiny nation of Brunei on Google Maps, and I noticed they have a Pizza-Hut there, not too many details but a few photos were attached and there was a Pizza that I didn't recognise, although I must say it looked rather intriguing! If I'm totally honest, I don't even know if it is savoury or some kind of dessert, so I have attached a copy.

I did attempt a reverse image search but I couldn't seem to see a very similar match, so I hope that the experts here might know? 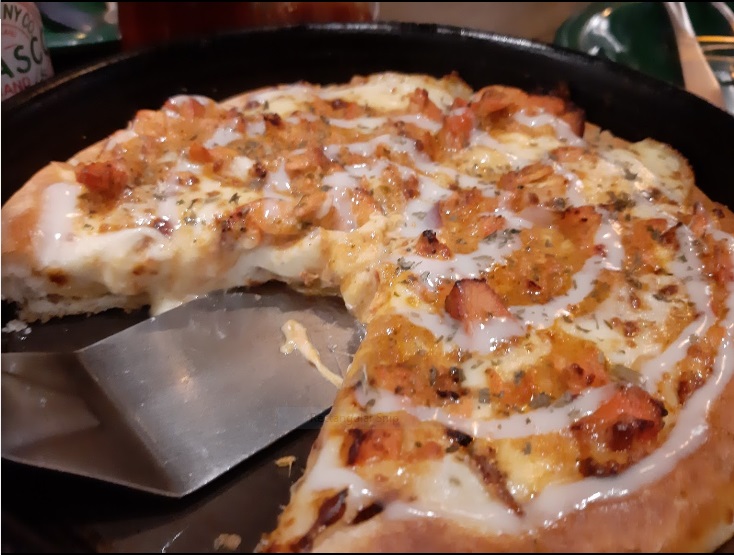 . I will be very grateful if someone can identify this, or even perhaps have a recipe?

Yours, Humbly! Hungry from Heanor :)

I can understand your confusion, but this is assuredly not a dessert pizza. The white circles of sauce, while they look like icing in appearance, are actually Ranch Dressing.

For comparison, here is a pizza that someone made themselves on Reddit. While I wouldn't say it is common to put ranch on pizza, it is definitely something that people do, for better or for worse. (See Edit)

The rest of the pizza is a bit more difficult to identify. I can see that there are chunks of lean meat, which I initially assumed were tomatoes, but I believe the texturing and crisp edges indicate meat more than tomato. It's hard at the moment to know which, specifically.

It might be the end of the answer here. However, the piece of information that this is specific to the Brunei pizza hut allowed me to finetune my search a bit, and I found this: 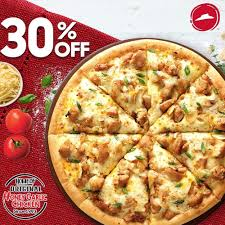 There are higher res images of this available on Google, if you want to look into it. This Pizza is a Brunei specialty, "Honey Garlic Chicken Pizza." Looking at the various sample images, I feel fairly confident that this is the pizza in question. The biggest difference is how much less green the flecks of green are in your image, but it wouldn't surprise me that a real Pizza Hut would use slightly less ideal-looking ingredients than their marketing images would suggest.

While it does not seem to come with ranch by default, Pizza Hut allows for customization of orders, so probably this pizza had Ranch added to it, whether by the restaurant or by the customer afterwards.

If you'd like more pictures of the pizza in question, minus ranch, you can search for "pizza hut brunei honey garlic chicken".

Let me know if anything doesn't quite check out.

Edit: Pulling this into the answer from comments below, for posterity.
I found this near the end of my investigating as well: pizzahut.com.bn/upload/images/pizza/ButterChickenMasala.jpg the image is labeled 'Butter chicken Masala' and has the trademark swirl, which I originally thought was ranch, but actually might be milk or cream.

Essentially, I have very little confidence in my original answer at this point. I would give 70-30 odds that your pizza is actually a Butter Chicken Masala pizza rather than the Honey Garlic that I initially thought, and odds are good that the white topping isn't even ranch like I originally assumed.

Not the answer you're looking for? Browse other questions tagged pizza dessert food-identification savoury or ask your own question.