Name of this jar?

Can anyone identify the name this jar so I can find it on Amazon or google it? I have searched Amazon for "sauerkraut" and ever other variation of fermenting that I can think of. Nothing even similar comes up. 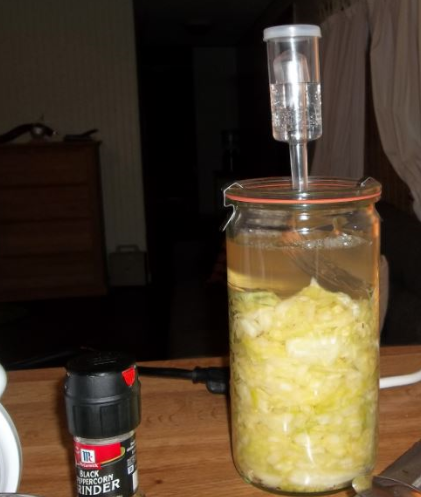 The clips look a lot like my Weck jars. Here is one with a fermenting lid. However, I don't see the fermenting lid on the Weck site.

As already identified by moscafj, this type of jar is produced by two brands, Weck in Germany and Rex in Austria. You can recognize it by the closure system, the rubber color (e.g. Fido makes similar jars with white rubber, although I've only seen them as a self-contained clamp system) and the thick walls you mention.

I was able to find some resources describing these jars with keywords such as "Weck fermentation jar" or "Weck airlock jar", but the only place that seems to sell the whole system is in Australia. The cylindrical glass itself is available elsewhere too.

You might be interested in articles like this one: https://www.makesauerkraut.com/fermentation-lids/, it suggests alternatives to the airlock so you can use the jar with a standard lid.

Not the answer you're looking for? Browse other questions tagged equipment fermentation or ask your own question.

5
What should I look for in a cookie jar?
8
Mason jar stuck inside another
4
What kind of reaction is this?
11
What is the name of this style of knife?
1
Is this batch of sauerkraut salvageable?
4
Making miso in a jar too big for the amount of paste. Is it a problem?
5
What is this spoon?
1
Sterilizing Mason Jar for Oat Yogurt?
4
lactofermenting blueberries have hardly produced any liquid - is this safe?