Lactic fermentation related question: Is there a relationship between pH, salinity, fermentation magic, and heat?

I am trying to figure out if there is a way to abstract out heat in the Lacto fermentation equation. In fact, I am not even sure if heat is part of the equation.

I know there seems to be a relationship between heat and yeast, but I don't know how or if heat could be a factor in controlling pH after the fermentation process begins, or if heat is just a useful tool independent of pH at that point.

Your question is missing the word 'bacteria'.

All bacteria have a growth curve. These will vary quite a lot by species.

This is the growth curve for salmonella 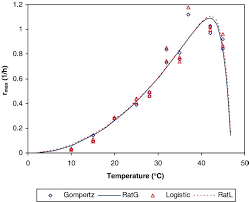 As you can see the growth peaks around 40C, and there is no growth at 47C.

Salmonella is a pathogen, and we store food at low temperature to inhibit the growth of harmful bacteria.

'No growth' is not the same as death.

The death curve is different: 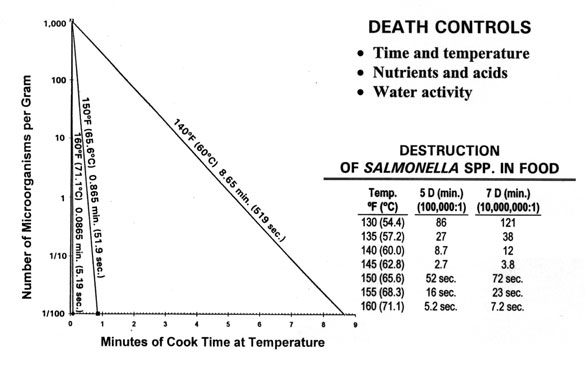 If you are trying to KILL bacteria, then it's a combination of temperature and time. Bacteria are killed in seconds around about 72C, so that's a safe internal cooking temperature. If you cook sous vide, you can cook at much lower temperatures safely, as an internal temperature of 54C for several hours would also kill the salmonella.

If we are talking about LAB, then we could be for example making yogurt. When we make yogurt, we add a culture of known bacteria to milk, which may have been heated to 72C to kill existing bacteria. Typically a yogurt culture consists of just two species. For the classic yogurt, using S. thermophilus, and Lactobacillus delbrueckii subsp. Bulgaricus, these both grow well at temperatures around 42C. However some yogurts are made with other species, some of which grow better at lower temperatures. For example Lactoccus lactis is much happier around 37C.

If you look at that table, then you can see that L. lactis is relatively more acidophilic than the main yogurt cultures.

The target pH for yogurt should be a fixed number, in that if we were to taste test yogurt at say 4.6 pH against yogurt at say 4.4 pH, then it's likely that we can find an optimum pH which is correct, perhaps +- 0.1 or whatever. Here it follows that if we want to consistently produce good ferments, then we should spend a couple of hundred dollars on a pH testing setup.

It should be apparent that not only do bacteria have a temperature growth curve, they also have a pH curve.

Many pathogens (Salmonella, E. Coli) are classed as neutrophiles: 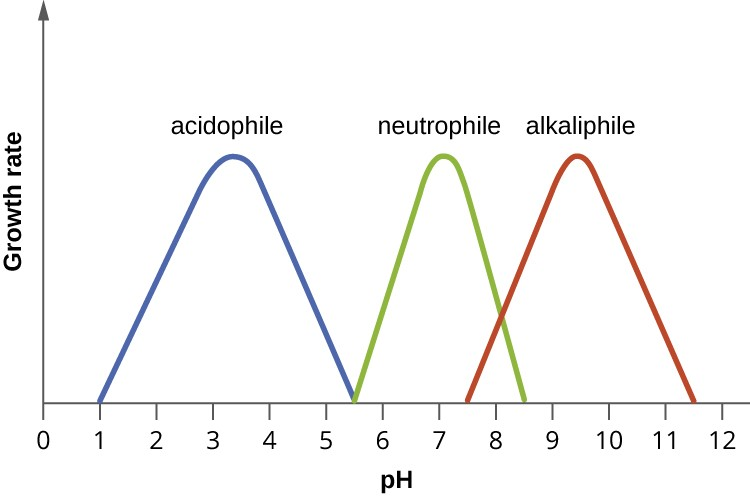 Many LAB are acidophiles.

By fermenting vegetables with LAB, we reduce the pH to levels unfavourable for neutrophiles. The 'safe' pH of foods is often given as 4.6, but could be 4.4 or 4.5 depending on regulatory requirements.

If we consider the fermentation of, say, a cabbage, then it is likely to be desirable to ferment it anaerobically. This is because LAB do not require oxygen, so by excluding oxygen our LAB still grow but moulds and yeasts do not. The lack of oxygen is so that the specific organism we are targeting (LAB) is the one that is favoured.

In terms of salinity, salt is again there to inhibit bad bacteria. Many harmful bacterial species are salt-intolerant, for example Clostridium Botulinum. This graph shows that L. plantarum, a very important species in vegetable fermentation (though these graphs are strains isolated from Stilton cheese), has roughly the same growth at 0 or 3.5% salinity, slightly slowed at 5%, barely any at 8%, and 10% salinity kills the bacteria.

It follows that if you use WAY TOO MUCH salt, then you may kill some of the bacteria that you want to keep, and if you don't use enough salt then bad bacteria can grow.

This is a combined pH/salinity graph for C. botulinum 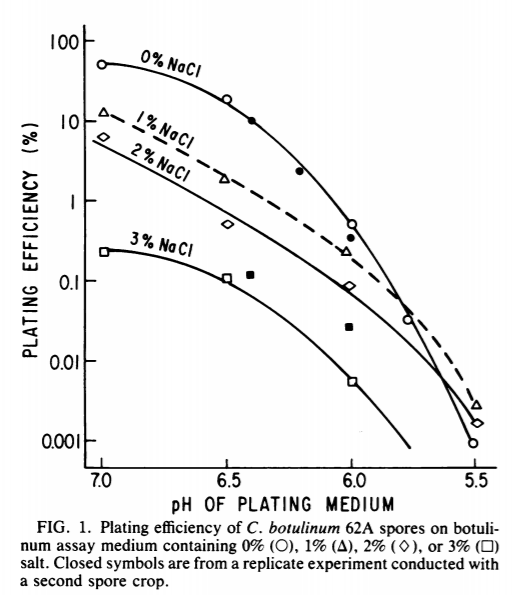 If we consider what C. botulinum is, it is not an infectious bacteria like salmonella, but rather one that produces a deadly toxin. Botulinum toxin is not a bacteria, but a protein produced by the multiplying bacteria. So it is desirable for us to have enough salt to keep such pathogens away.

If we return to L. lactis, mentioned earlier, then it follows that if we made yogurt at 37C using a L. lactis + S. thermophilus + L. delbrueckii subsp. Bulgaricus starter, with a target pH of 4.6, then the flavour of the yogurt is going to be quite different from if we made it at 42C, in which case the latter two species would dominate. That is because the resulting yogurt will contain amount of various different compounds (acids, alcohols, esters, ketones, terpenes) depending on which bacteria gets do most of the work, which we can influence by temperature.

This graph shows the various LAB in a typical sauerkraut ferment over time: 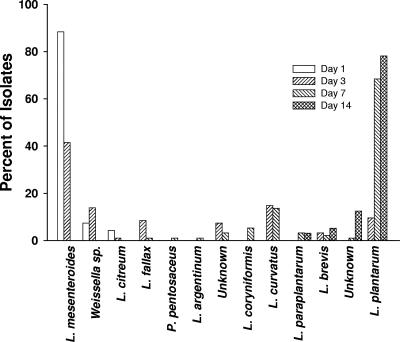 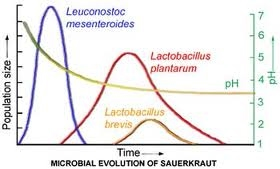 As can be seen here, L. mesenteroides will grow at quite low temperatures: 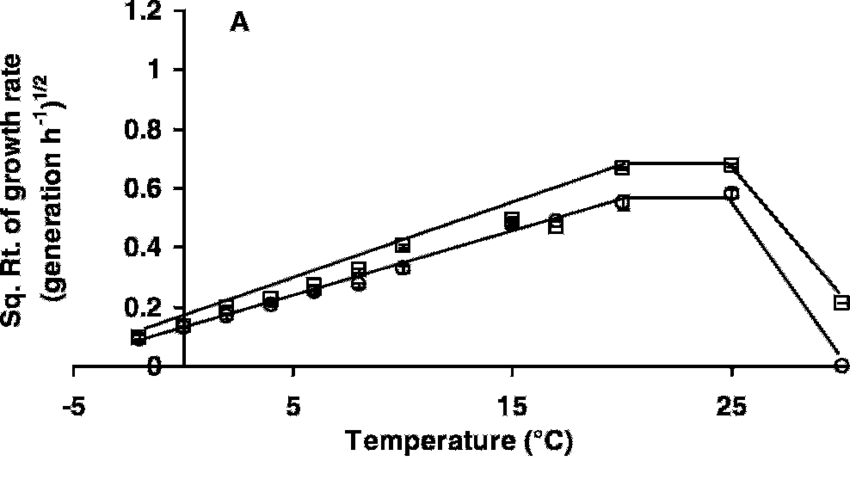 Comparing to the main homofermentative LAB in sauerkraut 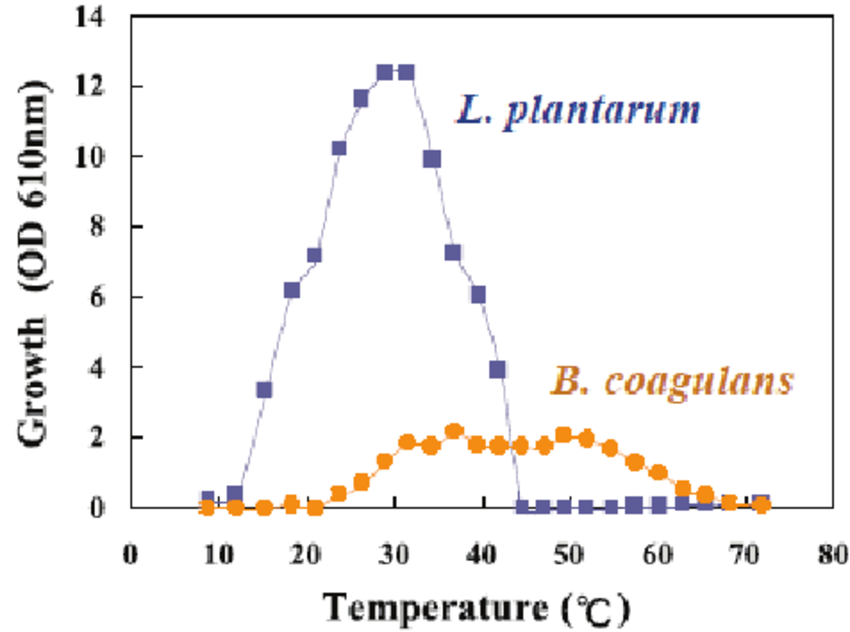 The result of this is that if you ferment sauerkraut around, say 18C, then the conditions are better for L. mesenteroides which produces flavour, to grow compared to other acid-only species. And, if you consider for example fermenting in a warm environment then it would be useful to start with a cooler temperature. Referring to the population size graph above, it turns out that L. mesenteroides is neutrophilic and is all dead when the pH reaches a lower level, so when the pH is acidic enough, there's no longer much point in cooling things down.

In a lactic fermentation, the variables are, temperature (better word than "heat"), salinity, pH, a lack of oxygen, and lactic acid bacteria (not yeast). In order for the product to be safe, a lack of oxygen and salinity support the growth of lactic acid bacteria (out competing unsafe organisms), whose development alters the pH of your product. In the end, it is the salinity and decreased pH (more acidic) that makes the product safe. If the temperature is too hot, this happens too quickly (or not at all), and the result can range from off flavors to unsafe. If the temperature is too cold, the result is dramatically slowed. It is a system of independent variables that have to work together to produce a safe and delicious product. So, yes, you can isolate and manipulate any of the variables. Of course, altering any of these variables will alter the final result, and could easily make your product unsafe if you are not careful or don't understand the system.

Nothing is independent, and there is no "the equation". Fermentation is a matter of different microorganism strains trying to occupy an ecological niche, which is a really, really complicated process. Each change in any of the environmental conditions will lead to a difference in what happens, and not in any linear or easily predictable way. So I would advise against trying to derive any kind of model at home. There is literature available, but I am not sure why you would want to read it if this isn't your job. For practical purposes, all you can do is following the exact recipe somebody else has designed and proven to work.

Not the answer you're looking for? Browse other questions tagged temperature fermentation heat or ask your own question.