Why would I want to pre-heat a pan before cooking? [closed]

What are some examples where I should wait for the pan to pre-heat, for how long, and why?

Thank you in advance!

That really depends on what you want to make! For example, the Spanish Omelette (potatos, onions, eggs, "potato omelette") needs to be poured in a pan which has had to be preheating for some time until it's quite hot (you can pour a little bit of olive oil, and if you move it and it moves VERY fast, that's usually a sign. Don't overdue it as you can "burn" the oil!). That is so you can "sear" the outside while the inside still remains with the liquids and flavours!

If you want to sear a meat (I asked a question about that a little ago, or in the case of the omelette, cook it on the outside so it can have a shape, and let the omelette be runny on the inside. Here you can see something I made the other day! 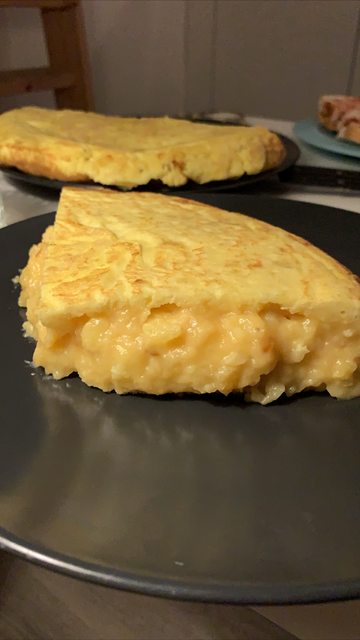 Another example in which I use it, if I'm cooking curry or something related with CHICKEN, I'd just toast a bit (in Spanish we call it "to golden the chicken", "dorar el pollo"), which basically is at high heat (PRE-HEATED!!) and with some olive oil, cook it quickly, so the outside is seared, but it still has all the liquids on the inside (still raw in most cases because of this quick cooking), and you can add it later!

Common kitchen wisdom is to pre-heat your pan most of the time, but especially when searing meat. The reason for this is to get a good sear (look up Maillard reaction for more details) relatively fast, while the inside can stay at a lower temperature; while you want to cook chicken all the way through, beef steak should mostly be at most medium in the middle.

You could absolutely get away with not pre-heating your pan or pot when you do not care about getting a sear, but most things develop a lot of flavour when seared, e.g. roasting garlic or onions before adding tomatos for a pasta sauce.

One thing to keep in mind is that stainless steel and cast iron cookware will stick more when not preheated. If you are shallow frying a piece of fish in a not hot enough pan, it will tend to stick and possibly tear when you flip it.

So in general, I would recommend preheating (with a little bit of oil in the pan).

Not the answer you're looking for? Browse other questions tagged temperature pan or ask your own question.

3
Should I preheat a pan, or start the cooking timer immediately?
4
Pan-fried hamburgers, what temperature?
13
Cooking on the stove: what is "too hot" for a pan?
5
The bottom of my black cheap pan has worn off and I can now see the metal below where food would go. Is that pan safe to use anymore?
0
Cooking juicy beef in a pan
5
Why must I return the chilled chocolate cookie dough to room temperature before baking?
9
Lots of water coming out of chicken breasts when cooking in pan. Why?
0
Wet-heat cooking intensity vs. time
5
Nonstick Pan Ruined in High Heat?
2
Yellow color from brand new Pre-Seasoned Lodge Cast Iron griddle (before seasoning or even heating). Is this normal?