Different ways of making the gravy in butter chicken.. which is better?

Can someone tell me the science behind the following scenarios:

How will taste be different in each case?

Your question is not totally clearly phrased, but basically you seem to be talking about three things:

Separately spices can either be dry roasted or oil roasted.

The interesting thing about oil is that a lot of compounds from spices are considered fat soluble. There is a longer discussion here: https://www.seriouseats.com/2014/07/indian-spices-101-benefits-frying-spices.html

but essentially frying spices in oil dissolves those compounds in the oil, and this oil will then form part of the dish. If you dry roasted then obviously this would not happen

There is a 455 page treatise on the Chemistry of spices here https://catbull.com/alamut/Bibliothek/Chemistry_of_Spices.pdf from the Indian Institute of Spices Research in Kerala.

For example nearly all of the volatiles in coriander are monoterpenes which are very poorly soluble in water. This is why perfume is generally made from an alcohol base. Here fat (oil) is the base.

If you dry toasted it's likely that the release of moisture from the spices would affect the flavour profile differently.

"Ginger owes its characteristic organoleptic properties to two classes of constituents: the odour and the flavour of ginger are determined by the constituents of its steam- volatile oil, while the pungency is determined by non-steam-volatile components, known as the gingerols. The steam-volatile oil comprises mainly of sesquiterpene hydrocarbons, monoterpene hydrocarbons and oxygenated monoterpenes"

Gingerols are flavour compounds themselves, and are converted into zingerone, shogaols and some remain as gingerols. Gingerols are the spiciest, then shogaols, and zingerone is considered sweet.

"The ratio of 6-gingerol to 6-shogaol concentration in raw ginger was 98:2. After boiling and steaming for 60 minutes, the concentration of 6-shogaol increased by more than 3 times; this difference was statistically significant (p<0.01). However, it was also confirmed that a sufficiently high amount of the 6-gingerol in ginger was retained after boiling (93:7), steaming (92:8) and stir-frying (97:3)"

It would seem that frying ginger first would result in a different flavour profile to if it was cooked in a curry base which would not exceed 100C (boiling temperature of water).

As far as tomatoes go, they contain a lot of water. This means that if you add them first, then you are no longer getting the high heat oil based reactions with the spices. So probably if you want to fry spices it's best to do them separately.

Frying tomatoes and onions is mostly about the Maillard reaction: 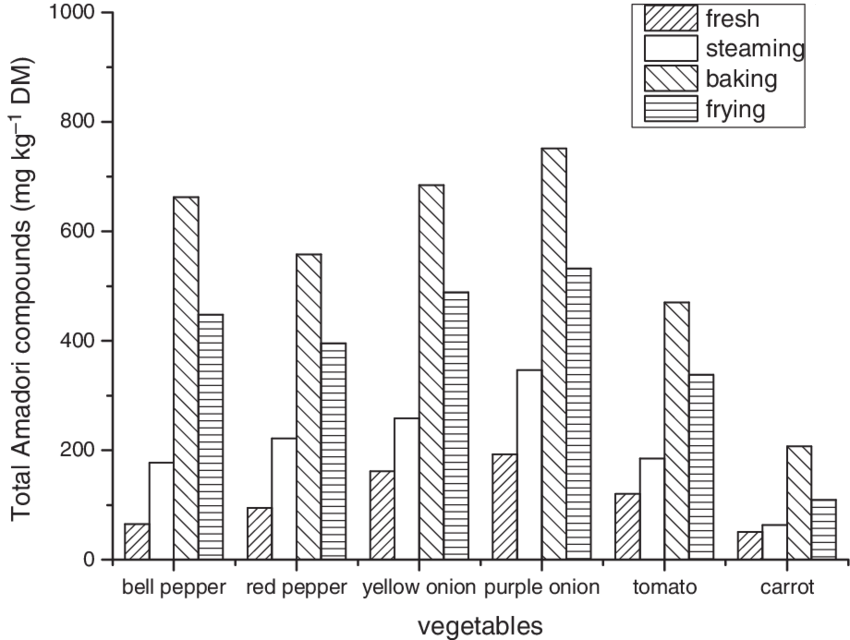 Frying tomatoes releases more of these flavours than boiling would.

For onions, there is a study here:

*Sué onion preparation: 30 g of sunflower oil were added to a saucepan heated to 100 °C and 1 kg of onions was then added. The onions were regularly stirred for 25 min. Cooking was stopped when the onions were translucent.

Sautéed onion preparation: 30 g of sunflower oil was heated to 155 °C in a pan. Then, 1 kg of onions was added and was evenly sautéed for 10 min. Cooking was stopped when onions had a homogeneous caramelized appearance.

Pan-fried onion preparation: 30 g of sunflower oil was heated to 130 °C in a pan. Then, 500 g of onions were added and were evenly sautéed for 18 min. Cooking was stopped when onions had a shiny appearance and some of them were burnt.*

There were very significant differences with the pan-fried onions:

Much higher levels of:

This is only for different methods of frying. It seems likely that the further process of cooking the curry would tend to break down the spicy and sulphur flavours that are left behind after a saute, so the difference would be less than this presents, but it should still be present - a long slow cook of the onions will make them taste seeetest. On the other hand flavours introduced by first browning the onion would be more durable

So I would fry spices first in oil, keep the oil as a minimum. Whether you want toasted onion flavours in your butter chicken seems like it would be a matter of taste, but cooking them long and slow will give them sweetest taste. For tomatoes frying will add flavour compared to boiling, though baking adds even more flavour.

Not the answer you're looking for? Browse other questions tagged chicken food-science butter indian-cuisine or ask your own question.

30
Secret to takeaway curry
17
Which onions to use and how to cook them for an Indian curry recipe that specifies "fry until deep pink"?
8
Heated up oil for frying, stirred it, tiny bubbles appeared and rose slowly but with very loud popping sound - why?
3
Is there a difference between paneer butter masala, matar paneer, malai kofta gravy?
1
Is it necessary to only boil vegetables (or chicken) or can they be pressure cooked and later be boiled for the flavour to seep in?
2
Cooking through thick liquids
3
What's the proper order to add ingredients for an Indian curry?
2
How can I improve my chicken curry recipe?
38
How do I add a strong "onion flavor" to the biryani (in restaurant style)?
0
Could someone please clarify whether the following things make sense while cooking chicken biryani?