One of my favorite grilled fish is the Blackspot seabream

Unfortunately, now and then, the belly part of the grilled fish tastes slightly bitter and smells a bit, which makes me not to eat those parts (quite a waste).

Does this come from not cleaning/preparing the fish properly or, as I've been told by a local fish-restaurant owner, is this caused by the pheromones of the fish during certain times of the year?

From what I've been told, the bitterness around fish belly is caused mainly by spilled bile when the liver or gallbladder is punctured.

May be caused by improper handling, packaging, rough treatment, excessive pressure (too much weight during storage or transportation), or careless cleaning procedure.

Improper cleaning or removal of the guts may also play a secondary role, though I suspect bile to be the main culprit.

You can some times tell in advance if you notice mustard-yellow spots in the inner walls of the fish belly before or cooking, which tend to turn silvery-greenish after cooking, caused by the spilled bile tainting the meat.

These are usually a indication of bitterness. 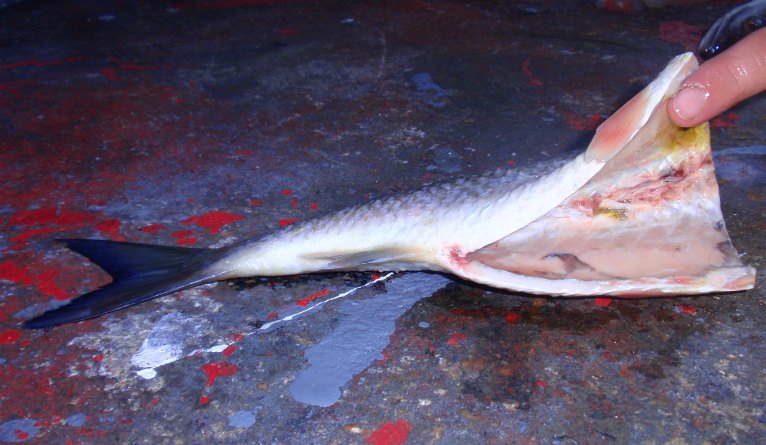 You can see an example around the area where the finger is touching the fish. Image source

Food source of the fish may also play a significant role in belly taste.

I have noticed that aquaculture or farmed fish tend to have little to no bitter taste at all, as opposed to wild or free range ones, possibly due to different feeding habits. Farmed ones likely exclusively eat the provided feed (with controlled selection of ingredients for taste and growth), rather than whatever they can naturally find in their environment.

Specifically addressing the pheromone as a cause, I've never personally heard about it, but pork does get Boar Taint (which is pheromone based effect on taste), so it is not totally beyond the realms of possibility, thought I'd expect it to have a widespread effect of fish as well, rather than just around the belly.

I have recently had fresh grilled wild White Seabream (Sargo) and it is one of the worse fish in terms of bitterness, which contrasts strongly with the aquaculture Gilt-Head Bream I can buy at the same vendor, and has absolutely no bitter taste, supporting my food source hypothesis.

When preparing whole fish at my household, we always slice open the stomach and use a pair of kitchen scissors to snip and remove its guts. We also rinse out the inside of the stomach after removing the guts.

I believe the reason the belly region of your fish tastes bitter is because of un-finished cleaning, just like your local fish-restaurant owner says.

Not the answer you're looking for? Browse other questions tagged flavor fish grilled or ask your own question.

15
What is the best way to reheat leftover grilled fish?
7
How to remove the bitter taste from green bell pepper?
7
How do you get the smell of fish off your hands?
4
How to reduce the bitter taste in broccoli rabe
7
Ideas for a pescetarian Turducken (aka a fish in a fish in a fish)
0
What else can rid the fishy smell of fish besides Casein?
3
why does toast smell and taste different than bread?
6
Why does tilapia and swai fish taste like catfish?
1
Fish always giving bitter/unpleasent taste/smell