So, we had some stir-fry burn up pretty badly in our trusted cast-iron skillet. Upon cleaning the skillet some of the coating came off with the burned food. I made a first attempt of re-seasoning it with avocado oil and putting it upside down in the oven for an hour at 375°F. The result was mediocre, there was some coating in the stripped areas but it didn't look like the rest of the surface, and you could see some bare metal shining through. Sure enough, food was sticking again to the stripped area.

My wife re-seasoned it again, this time following slightly different instructions that were on the internet: using olive oil and baking it for two hours right-side-up at 450°F. At the end of the process the skillet definitely had a new hard coating that was smooth and not sticky to the touch. However, there was an anomaly in the middle (probably around the same spot that got stripped originally, but we can't be sure). There was a raised ridge around the area, but the area inside the ridge still did appear to have a proper coating: 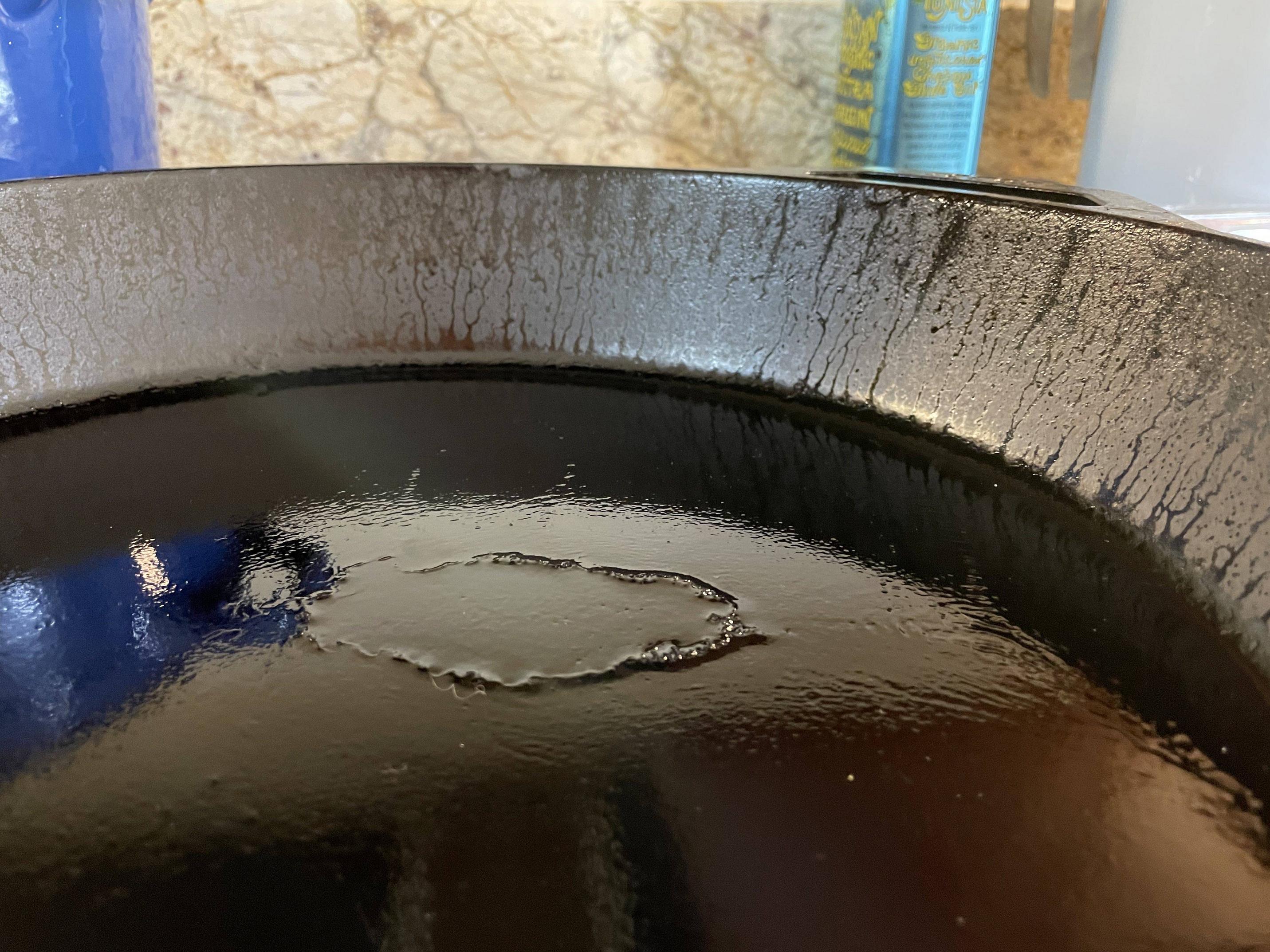 So, my question is: what went wrong here and how does it affect the usability of the skillet? Do we need to strip it and re-season it yet again? Can we ignore this anomaly? Is there anything we can do to prevent this sort of thing from happening?

It looks like the second attempt used far too much oil, which can lead to all sorts of uneven spots in the pan. Seasoning that thick tends to flake off when you cook with the pan. I would strip it and reseason immediately. In general you want to use a very very thin layer of oil, wiping out the excess from the pan with an absorbent cloth (I don't like using paper towels since they can leave residue in the pan) before heating. There should not be enough oil in the pan to drip down the sides or form a noticeable layer in the bottom like it has done in your picture. Placing it upside down in the oven is a way of ensuring that any excess oil drips out of the pan instead of forming drips in the pan or a too thick layer at the bottom. Then you repeat the process at least three times if you start from a completely stripped pan. It's normal to require several layers before the finish is restored.

If it feels sticky to the touch after you've washed and dried it, give it a scrub-down with a steel scourer until that stickiness is reduced. You do not have to go all the way down to bare metal, or even achieve a consistent appearance of the surface - just get rid of any major bumps and ridges. Rinse and dry. You'll now have to re-season the whole pan.

If it's sticky not to the touch, but to the food you're cooking in it, a whole-pan re-seasoning would also normally follow.

This can be done in an oven or on a hob, and in either case the key is little and often. Wipe it with less oil than could drip, burn it in, and repeat several times (how many times depends on too many factors even to estimate). Although the lightest oils (e.g. flax) are best because they burn off faster leaving a thinner layer allowing for more coats, any oil will do if it's applied thinly enough. I happen to use Canola.

Even if you're using an oven for this, there's going to be a lot of smoke, so open the windows and cover your hair if it's long. Having committed yourself to some fumes, then, a hob may actually make the repetitive aspect of the process more convenient.

For the wiping itself, I've found nothing better than a small piece of loofah. It's soft enough to move the oil around very well, stiff enough to keep your fingers from getting sizzled, and not so absorbent that it becomes saturated with hot oil. A small linen or cotton rag will do, as will cotton wool, but you'll have to use something to poke it around with such as chopsticks or a fish-slice. Loofah-less, I have also resorted to using unprinted bits of cardboard boxes, and even scrunched-up office paper.

Keep doing that until you like the look of your work. Cool a bit, rinse, dry. Use it for oil-heavy cooking for a while (onion rings, tempura, and the like), working through fried eggs, before working up to starchy risk-takers like pancakes and fried rice. Cooking, after a point, is as good as seasoning, as long as it's of the right kind to suit the condition of the pan.

Not the answer you're looking for? Browse other questions tagged cast-iron seasoning-pans skillet or ask your own question.

4
Does cast iron have a coating from the manufacturer?
7
Maintenance and safety of cast iron skillet
4
Is it possible to destroy the seasoning on cast-iron by getting the pan too hot?
0
Can Enamled Cast Iron cause fires?
4
Skillet rust (?) and next steps with regard to seasoning
4
How to recover cast iron skillet with melted fiber on it
2
Cast Iron Skillet / Pan stains
4
Fighting flash rust on cast iron pans
21
Seasoned Cast Iron NOT being Non-stick
0
Cast iron pan rusts during seasoning