How to open a malfunctioning tamper-proof bottle cap?

I have a bottle of oil I want to open. It is a glass bottle with a threaded metal cap. It is the type of cap which is connected in a few places to a lower ring. Usually, one just unscrews the cap, and it tears off the ring, which stays below the threads.

I now have a bottle whose cap+ring system is too loose. When I turn the cap, the whole thing, cap+ring, rotates freely without unscrewing or exerting a tearing force on the connection places.

What I tried, unsuccessfully:

Note that this is a different problem than the much more common one of both not turning and my fingers slipping on the cap instead. I can grip the cap perfectly well, and it rotates very easily, it just doesn't unscrew or separate from the ring. 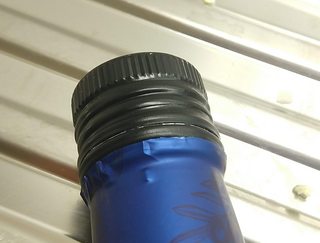 Can you grip the lower ring (the one that is supposed to break free) with a pliers or nut cracker? ...squeeze and twist the top.

I've had this before, and solved it by breaking the join between cap and ring with a small screwdriver, one section at a time. Long nose pliers may be handy towards the end. You might manage to get the tip of a butter knife in the join instead of the screwdriver.

Trying too hard when it's not coming off tends to deform the threads in the cap, so it may not go back on securely later - you might need to decant the contents.

I've had some luck with a serrated knife. You have to hold the cap so it doesn't spin and cut very very carefully. Or you can just punch a hole in the top of the cap and decant into another bottle.

Not the answer you're looking for? Browse other questions tagged oil or ask your own question.

4
How long can a bottle of self-made basil sauce last without rotting?
1
Oil Dates, If a cooking oil has never been open how long past the “Use by date” would be acceptable?
4
If not hydrogenated, how are spreads from olive oil made?
6
How to prevent olive oil container from getting oily outside?
0
How much to heat mustard oil before cooking?
0
What are the black spots on the lid of my expensive oil bottle?
1
How to make homemade cooking spray
0
How can I remove excess fat/oil from my slow cooker dish?