What is a stem pan?

I have a vintage cookbook, from Charlotte, North Carolina and about 1958, that has a recipe for “Different Applesauce Cake”. It says to “Cook in stem pan approximately 1 hour, 10 minutes”.

In all cases, search engines like to replace “stem” with “steam”. There does appear to be something called a “steam pan”, but it appears to be the kind of pan used by buffet restaurants to keep food warm, not something for baking.

Searches on “stem pan” with “apple cake” do bring up some variations on some odd sites; but they don’t explain what it is. Some recipes use a variation of “use a loaf pan or a stem pan” and others a variation of “use a bundt pan or a stem pan”. Some suggest using it ungreased, some greasing and flouring the pan, others lining the bottom with greased paper, which seems a bit difficult if it’s just another word for bundt pan, or even if it’s another term for “tube pan” which is what I most suspect.

On the idea that this might be a dialect around Mississippi and North Carolina, I tried a search for “stem pan” and “southern” and found two contradictory recipe pages with images of the pan in question. A recipe for corn bread that has a photo of the corn bread in a skillet; this may be a stock photo, however. And a recipe for tomato soup cake that has a photo of it being poured into what looks like a bundt pan. So it may be that this is a term that applies to multiple items.

I did a search specifically for the phrase “stem pan” limited to the site archive.org; the term appears to be exclusively found in older organizational cookbooks (five church organizations, one library association, one high school club, and one college club). They range from 1911 to 1982 except for two: one from 1991, but it’s the submitter’s grandmother’s recipe, and one from 2006, but it’s a reprint from the organization’s 1981 cookbook. (Of course, also, since it’s archive.org it’s likely to be weighted toward older books.)

There are no photos, as is normal for such cookbooks. There are no definitions, either, although there is one parenthetical: “Bake in greased and floured stem pan (I use cast iron bundt pan)” which could of course be read either as an example or an alternative. One intriguing set of directions ends, for Texas Pecan Cake, with “Bake in stem pan 10x4 inches”. I suspect that this means a 10-inch diameter, 4-inch deep pan, especially given the quantity of ingredients; it’s an odd direction, though, because by that point the batter has already been poured into “a well-greased tube pan”. However, it matches something I saw in The Joy of Cooking while trying to look up the term, that a 9-½ by 4-¼-inch plain tube (angel cake pan) is “Conventionally described as 10x4-inch plain tube” (p. 701 in my 2006 copy).

What is a stem pan? A skillet? A bundt pan? A tube pan? A loaf pan? A variation? Or something else? Or more than one item? I am at this point almost certain that it is either a tube pan (most likely), or a variation on a tube pan, but the lack of any definition or photo keeps me from knowing for sure what variation, if any, the term might mean.

I also believe a stem pan is what we would call a 'tube pan' or 'bundt pan', as in Joe's answer. I have, however, found a few links to back me up.

Here is a comment on a Chowhound question suggesting a recipe using a stem pan. When asked what a stem pan is, the poster replied: "basically, a stem pan is what they now call a tube pan".

This recipe for Sour Cream Pound Cake, from Adams Extract, calls for the use of a stem pan, and has a reproduction of a 1950's-looking recipe card depicting a bundt cake. The relevant text is:

And the image is clearly a cake made in what is now called a tube pan: 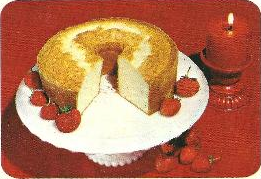 At least at this company, or this part of the south, the term seems to have been used to refer to simple tube pans and segmented bundt pans.

Some recipe cards call for tube pans or bundt pans instead of stem pans; unfortunately, the cards are not dated, so that it is difficult to say whether this was a term that changed over time or was simply interchangeable.

Although I agree with the general vaguely toroidal shape of the individual compartments in Steve Chambers' answer, I don't believe those 'baked donut' pans existed in the 1950s, or at the very least didn't have sufficient distribution to assume that people would have them. (as is still true today).

I would recommend using a standard tube pan, a bundt pan, or similar pan in which there is a protrusion in the middle to allow for more even heating.

The only other possibility that I could think of would be something "stemmed" like a wine glass. Both those are typically made of glass, and considered dishes or bowls, not a pan. These are typically used for trifles, in which the dessert is assembled for serving after having been baked, and likely aren't oven-safe.

This annoyed me. the difficulty of the search not the question! ;-)

Though I finally did find something here.

And in the spirit of avoiding link-only answers a screencap of the page in question in case it goes away:

I am by no means 100% on this as being the Stem Pan you are looking for but depending on the recipe it might be close.

BTW I found this linked on Google with this earch

what is a stem pan for baking

Not the answer you're looking for? Browse other questions tagged baking cake language pan vintage-cooking or ask your own question.

6
Why use metal cake pan instead of silicone one?
1
Bundt Pan for a Citris Olive Oil Cake?
6
Baking a cake in a larger/smaller pan
3
How to choose a Bundt cake pan?
2
Used Metal Knife on Aluminum Cake Pan, is it Ruined?
1
How do I calculate an increase in pan sizes for a cake recipe?
4
Baking personal sized chiffon cake
1
Why did this cake fail?
0
do I need to adjust the cooking time for a pound cake baked in two separate bundt pans instead of one regular tube pan?
3
Why would using a tall baking pan cause the top of a cake to be darker?