Simmering, rather than caramelizing, onions (plus garlic and ginger)

I can caramelize onions, garlic, and ginger over 30 minutes, stir frying.

But this requires me to stand in front of the stove for 30 minutes. Instead, I prefer to spend 90 minutes, adding a bit of water and a touch of oil, then letting them simmer, with the onions taking half the time alone before the others are added. I can then do something else during that time. 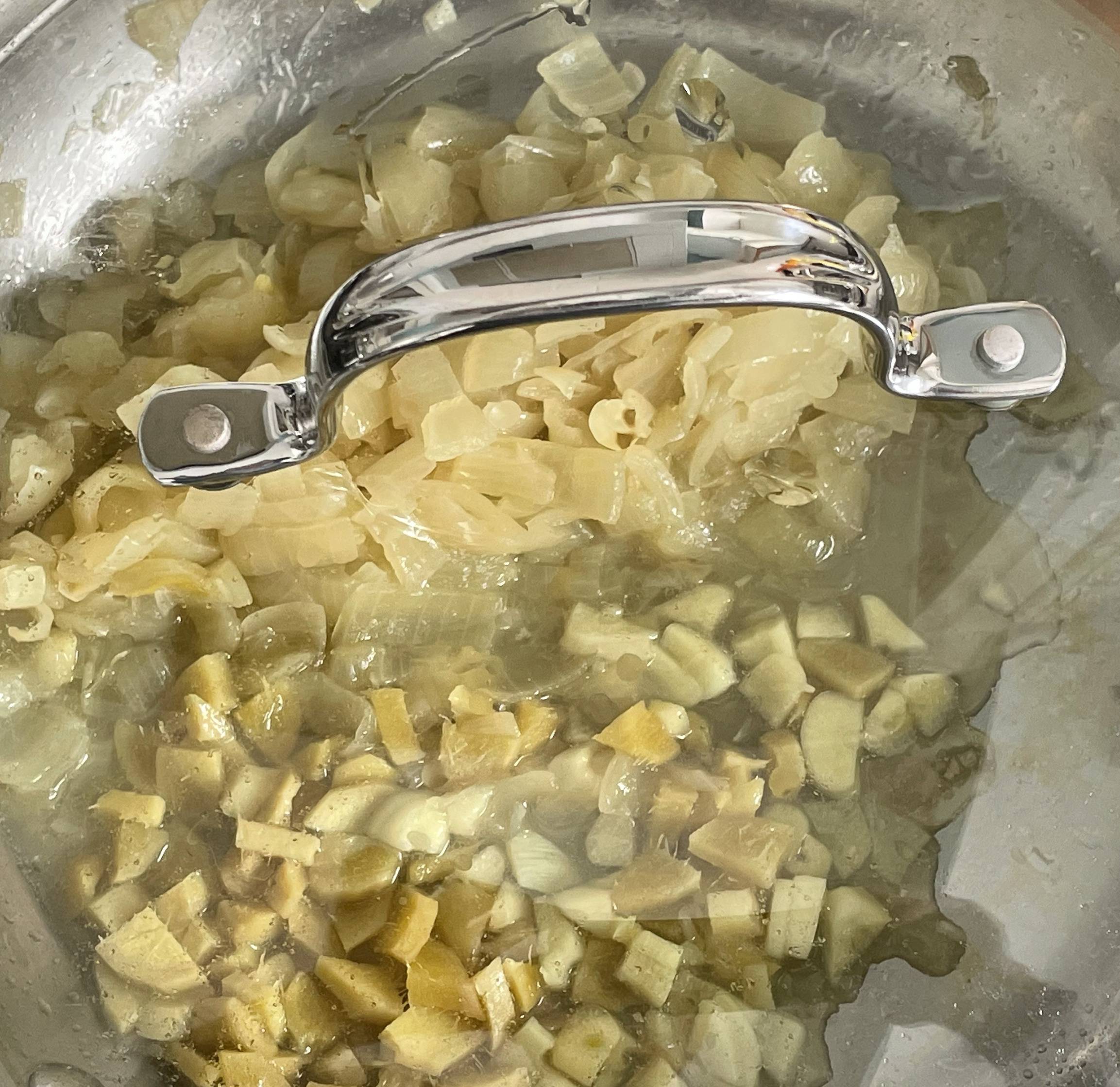 Does this process have a name? Does it still qualify as caramelization? Would a self-respecting chef do this once a week with larger quantities and freeze small containers with the mixture for use throughout the week?

I say the following only half in jest. Since Tetsujin slapped the entirely derogatory "fairgrounds" term on boiled-down onions, I'm wondering whether I can elevate this method ever so slightly by giving it another term, and a French one at that.

Correction to self: as pointed out by Preston in the comments, French onion soup is caramelized onions plus (beef, usually) stock. The description above is my past-years attempt at reducing the time I spend preparing F.O.S., and it stuck in my mind as a correct method.

Well, now I know why I complained about onion soup tasting with overwhelming onions. It's because I multiplied the quantity of onions in an attempt to avoid the caramelization step.

Often, cooking onions over low heat so they turn translucent without browning would be sweating as was already mentioned, but the name would technically mean cooking them until they gave up their liquid.

With a little bit of water in the pan, and the lid on, I'd be inclined to call it steaming, but if you then cooked it without the lid some to get rid of the liquid (like a steam-sauté technique, but at lower heat), I'd just consider it a shortcut to sweating, as this is also one of the many shortcuts that some people suggest for caramelizing.

If there were more than just a touch of water (as it looks to be in your image), then I might consider it to be braising. It would need to be completely submerged to be boiling.

But that's just the initial stages of it before they take color, if you're cooking them all the way to brown, it's still caramelizing, just not using the 'classic' technique.

Without the water, I'd call it 'sweating'.
With the water & lid, they're going to come out a bit like like fairground hotdog onions… not really like caramelised.

Fine for Spanish Tortilla (or hot dogs), not so great if you need that Maillard-like reaction.

If you don't use the water, or the lid, you can slowly caramelise onions with little supervision, but not none.
Check them every 10-15 mins at 'too slow to burn' pan temperatures, with plenty of oil. This is another one of those "work it out by repetition based on your stove heat & your pan thickness" things that might take you a few tries to get just right.
After that you can do it every time.

You can also cheat a bit (it's a fake & doesn't taste quite the same…)
Sweat at minimal heat, like for tortilla, for half an hour, then push up the heat a fair bit once you're there to supervise & quickly brown the already soft onions by keeping them moving constantly.
That's still a bit 'fairground' but a reasonable cheat.

Not the answer you're looking for? Browse other questions tagged language onions caramelization or ask your own question.