What happens when you reduce stock all the way?

If you have fully filtered stock or broth, and you boil it until all of the liquid evaporates; what would you be left with. If you boiled only until a bit before that point would you have super compact flavor?

If you reduce filtered broth all the way, you get portable soup. It dries down into a solid that looks a bit like leather. Because of the gelatin from the bones, portable soup is bendy and flexible. It was used in the 18th century as a portable food item, eg by soldiers and people traveling through the American wilderness. There's an excellent video by historical reinactor J. Townsend: Easiest Way to Make Portable Soup. I summarized the method below. 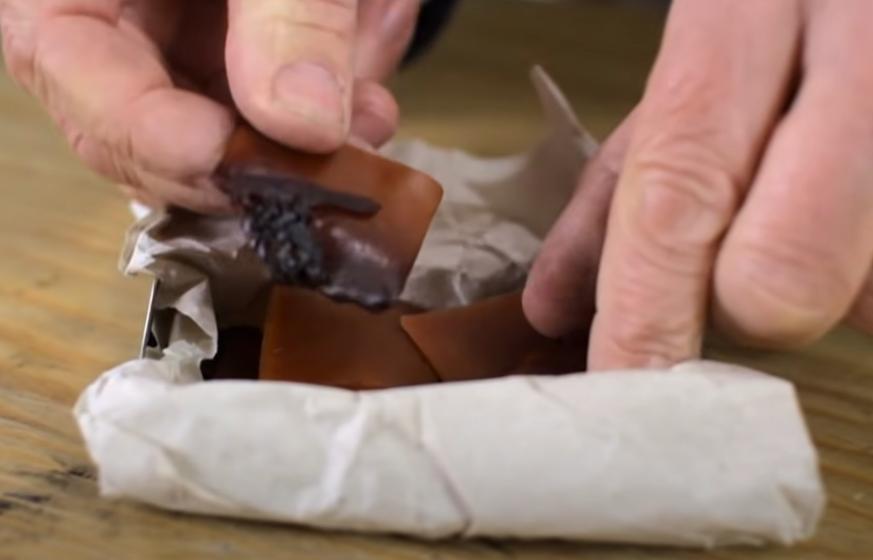 (images is from the same video)

You can also make portable soup on the stove or over a fire, but apparently it's really difficult to do without burning. The slow cooker provides a much lower heat, so it's less likely to burn. You can actually speed up step 3 by starting on a higher heat - either simmering on the stove or using the slow cooker on high. The final stage of cooking should be done on low to minimize the chance of burning. Have a look at Townsends' follow up video, Troubleshooting Portable Soup.

To use the portable soup, rehydrate it in hot water and use it as you would broth.

A stock reduced to a syrup is known as a glace. Glace is French for "glaze". The glace is used to flavor sauces. If you stop the cooking before it becomes a syrup, you have what is known as a demi-glace. If you cook it beyond the syrup phase it will probably burn. These are intended to be highly flavorful preparations.

Removing all the liquid out of stock is essentially how bouillon is made. If you managed to dehydrate the stock without burning it, you'll be left with a big disk of bouillon at the bottom of your pot, similar to the cubes you buy at the grocery.

If you leave it with just a little water, you'll have a gooey bouillon paste.

Not the answer you're looking for? Browse other questions tagged food-science stock broth or ask your own question.

4
Can the broth from a low country boil be used for anything else?
3
Was my bone marrow broth boiled too long?
5
Couldn't snap the bones in my chicken stock
3
Making the most out of stock
3
How can I achieve flavorful, gelatinous pork broth economically?
10
Can fish stock be left simmering for a long time without damaging the flavor?
4
Stock questions. What to taste for when making stock?
2
Why is my stock flavorless?
3
How much flavor do you lose when you clarify a stock with an egg raft?
3
Perpetual stew-like stock using the fridge: is it a good idea?