Vietnamese Coffee (cocktail) - what to sub for condensed milk?

If you've ever enjoyed a Vietnamese Coffee, they're to die for. Blend:

blend them together and this is where the condensed milk and avocado shine: ends up this buttery sweet thick ice cream texture, from a blender. I add bourbon to it (which really doesn't matter unless it impacts the substitution ingredient).

Question: if you are serving a milk-intolerant (not vegan) guest, what could you sub for the condensed milk? I'm thinking I could replace condensed milk with honey or sugar mixed with soy/almond milk. Maybe blend the whole crushed ice and all together ahead of time in order to avoid heating milk substitute.

Edit: here's a credible-looking recipe, as it says, this drink is quite common in SE Asia.

If you're comfortable with a modernist answer, you could use 210S, a 50/50 blend of modified (for cold solubility) Gum Arabic and Xanthan gum, popularized in part by Dave Arnold's book, Liquid Intelligence.

Sweeten your favorite milk substitute (eg. almond milk) and then add 0.5%-1.0% by weight to thicken it. This will require a blender, and I suggest dispersing the 210S in some sugar to prevent clumping.

If you can't source 210S (it is available on Modernist Pantry), then you can use unmodified Gum Arabic and Xanthan gum, but it will require heating.

Another approach could be to use 0.2%-2.0% lambda carrageenan with a nut milk, though I'm not sure it could achieve quite the same viscosity as 210S without gelling. Coffee Mate (suggested in another answer) uses carrageenan (among others) as a thickener, though it is not nearly as thick as sweetened condensed milk.

I would suggest that you use cream of coconut, which is the base for piña coladas as a substitute. It's thick and sweet, and should complement the avocado pretty well. Note that this is a canned produce, the most widely available brand in the USA is Coco Lopez.

Outside the USA it's harder to find, and can be pretty expensive. There are also products that are confusing, like creamed coconut, which isn't remotely the same thing. I make my own by spooning the cream off the top of coconut milk and mixing it with some palm sugar (regular sugar works fine too) and then cooking it down to thicken it.

Soy or almond milk will be comparatively watery, so you'll lose the some of the luscious creaminess of the original drink. Also, since you mentioned trying to avoid heating your non dairy milks, soy milk does taste terrible if heated, but almond milk and coconut milk taste fine when heated. (I'm talking about the the kind of coconut milk that's intended as a milk substitute and comes in cartons in the dairy cooler at the supermarket, not the kind that comes in cans.) But if the only heat source in your drink is the shot of hot espresso, I don't think the heat would be an issue even with soy milk.

I suggest using a liquid non-dairy creamer. It won't be quite as thick as the sweetened condensed milk, but it should be closer than any of the non dairy milks. You have two options - the shelf-stable, unrefrigerated kind (eg, Coffee Mate brand), 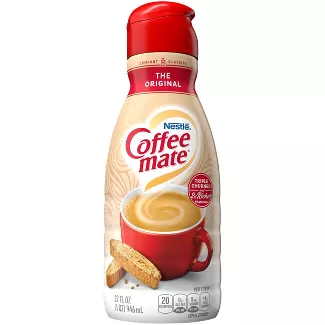 and the refrigerated kind that you find in the dairy cooler next to the half and half. 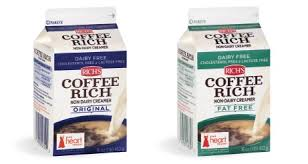 I expect that the refrigerated kind is a higher quality, but I haven't done a side-by-side comparison.

From my quick google search for the example images above, I also learned you can get coconut-based liquid creamers. That sounds delicious to me, but there are many people who hate the taste of coconut so it's not a one-size-fits-all solution.

There is also canned non-dairy evaporated milk, available in the baking section of the grocery store next to the sweetened condensed milk and regular evaporated milk.

Honey and sugar can be tricky to dissolve in cold liquids. If you mix the drink in a shaker, you may be able to get them dissolved with vigorous shaking. But a much more foolproof way to sweeten a drink is with simple syrup. Combine equal parts sugar and water in a saucepan and simmer for several minutes until the sugar is dissolved. Once cool you can store any leftover in a bottle in the fridge.

In my opinion, none of the nondairy substitutes will taste quite as good as the original sweetened condensed milk. So you might want to adjust the proportions so the final drink relies less on the condensed milk, and more on the avocado, for its creaminess. Also, you could add some banana. It'll add a different flavor element, but bananas will definitely give a blended drink that thick, creamy texture you described.

I use sweetened condensed coconut milk. Nature's Charm is the brand I have access to, there may be others. 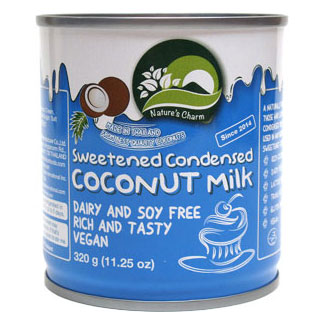 Not the answer you're looking for? Browse other questions tagged substitutions cocktails or ask your own question.