What would cause the peel of a lime to turn yellow?

About a week ago, I purchased two limes, a lemon, a couple of kiwi fruits, and some oranges. When I got home, I placed them in a bowl. One of the limes ended up at the bottom of the bowl but there were still enough gaps between the fruit that it wasn't completely hidden, and there weren't enough fruits above it that the lime was in danger of being squashed.

I've since used up all the fruit but the limes. This afternoon, when I picked up the lemon to use, I noticed that the lime that was partly underneath had changed color from green to yellow. Here is a photograph of the two limes: 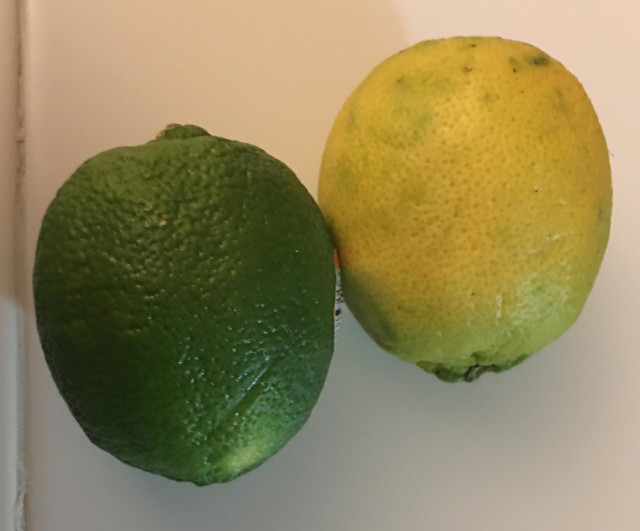 Why has the lime on the right turned yellow? It was purchased at the same time as the one on the left and stored in the same bowl.

You've said that that lime was at the bottom of the bowl, mostly covered with other fruit. I'll bet it was very close to some kiwis.

Fruit -- particularly fruit like kiwi which ripens after being picked -- produces and releases ethylene. Ethylene serves a key role in fruit ripening. This is why you're advised to keep bananas in a closed paper bag to ripen them: the ethylene gas produced by the bananas builds up and ripens them faster. In open air, ethylene concentrations (in the fruit, not just around it) remain lower, and ripening is retarded.

In fact, citrus producers commonly use ethylene gas to artificially ripen ("de-green") the rind of citrus fruit. This would normally be done for lemons and oranges, which are commonly picked when still slightly green.

While you didn't have a fully closed container, it sounds like the lime was deep enough in the bowl for some concentration of ethylene, produced largely by the kiwis, to build up around it, ripening at least the rind of the lime. (Yes, some limes are yellow when fully ripe -- limes at the store are picked unripe because consumers like the look of green ones.)

Congratulations on your accidental biochemistry experiment.

Not the answer you're looking for? Browse other questions tagged storage lemon color lime or ask your own question.

22
What can I substitute for Kaffir Lime Leaves?
17
What is seeping out of my key lime pie?
2
What can I do about excessive lime flavor in a pork roast?
5
In ingredient lists, does "lime" mean the fruit or the chemical?
3
What is the difference in flavour between the zest of an orange vs lemon vs lime
7
What method should be used for caramelizing chopped lime?
12
What does it mean when an egg splatters and the white is greenish-yellow?
1
What could cause ice pops (popsicles) to go soft in the freezer?
3
Why would using a tall baking pan cause the top of a cake to be darker?