What is a refrigerator tray in older recipes?

Doing a search for “refrigerator tray” on archive.org, I found the pamphlet for Use and Care of Your New Norge Refrigerator which mentions many uses for refrigerator trays, all involving freezing in some way. From the various recipes for ice cream and other frozen desserts on pages 31-32,

Pour into refrigerator trays and freeze.

…freeze in refrigerator tray until firm.

From this, I can deduce that a refrigerator tray is something that you can pour liquids into and then put into the freezer, but that’s about it.

Those pages also mention trays without the qualifier “refrigerator”:

Pour into tray of chilling unit and freeze to mush.

Pour into tray and chill to soft jelly… Return to tray and freeze to desired firmness.

Turn into freezer tray and freeze 45 minutes to 1 hour.

The list of definitions on page 9 does not include a definition for refrigerator trays, although it does include one for ice trays, and specifically mentions using them for making ice cream:

Ice Trays: Fill the trays with water to within 1/4 in. of the top. Place trays in their section on top of main freezer compartment. When making Ice Cream, use the aluminium tray by removing plastic cups or dividers.

I would guess that the ice trays mentioned are the metal trays for making ice cubes, which used to come with a removable (always metal, in my limited experience) divider that doubled as a loosening device for the ice cubes. They seem awfully small for use as a dessert pan, but then the Better Homes and Garden recipe did use the plural for its mention of refrigerator trays.

I ran a quick search on ebay Images. Looks like a refrigerator tray is a shallow glass or enameled dish. I saw a few plastic ones, also from the 60s-70s. 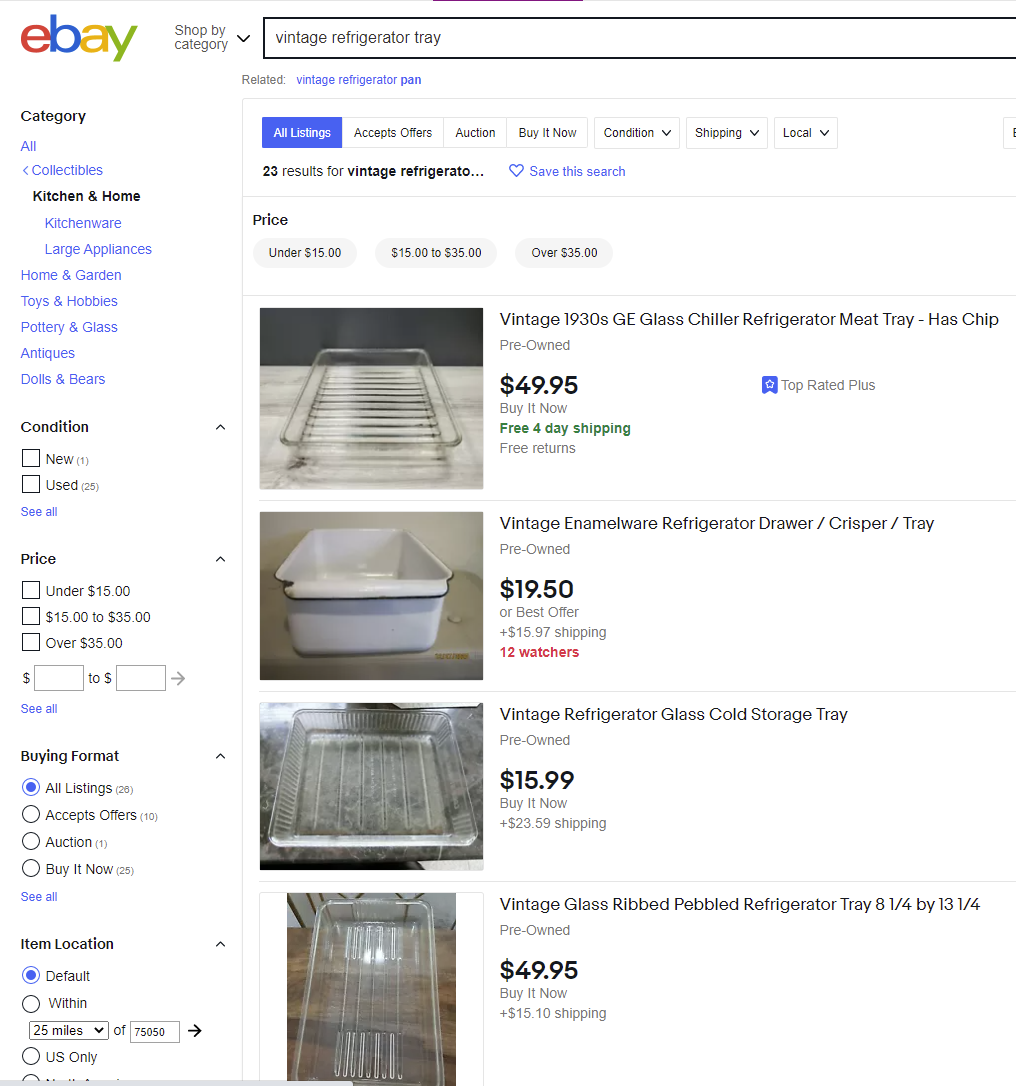 Ice cube trays with removable dividers are referred to as “refrigerator trays” and were designed specifically for freezing desserts.

The terms “refrigerator tray”, “freezer tray”, and “ice cube tray” were used somewhat interchangeably for making desserts with these trays, at least during the period after ice cube trays with removable dividers were included with refrigerators and until the included ice cube trays became one-piece plastic trays.

The Carnation Fun to Cook Book, for example, has a recipe for “tropical freeze” on page 40; for the final freeze, the recipe is poured into “two small (or 1 large) refrigerator trays”. The drawings accompanying the recipe show shallow, rectangular trays. 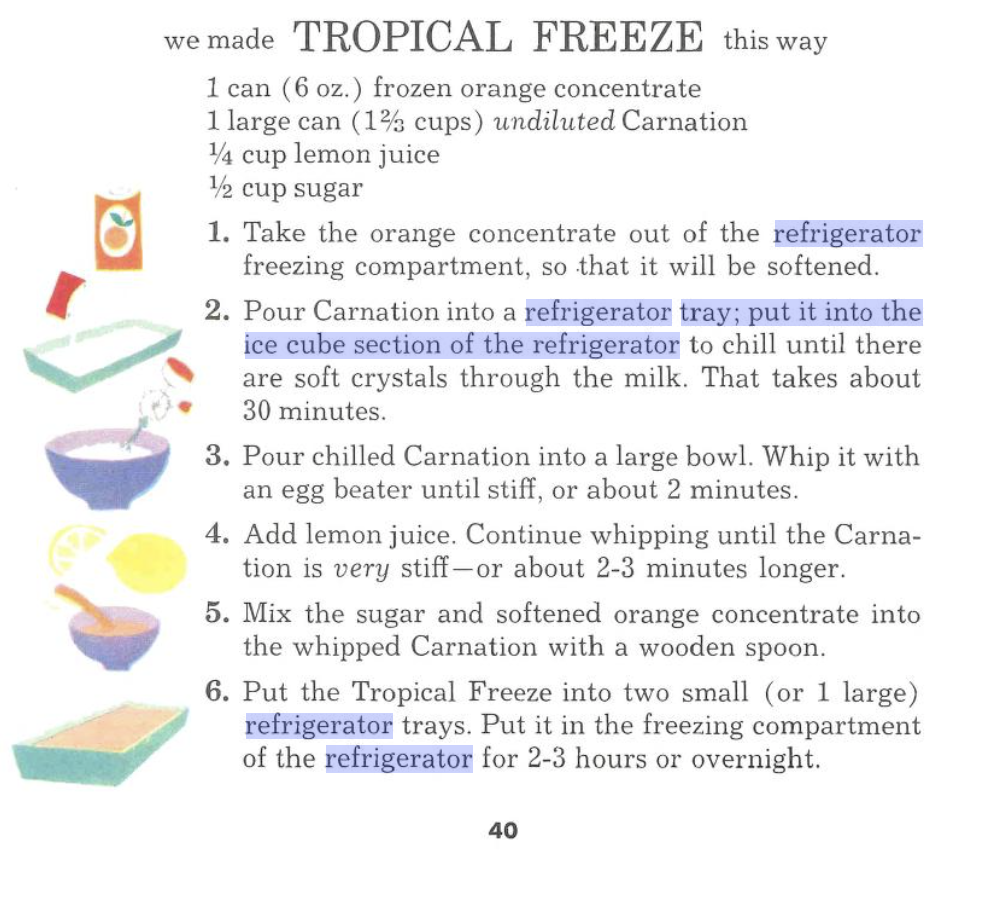 Experiences with Foods by L. Belle Pollard includes notes on “making ice cream in the home refrigerator” on page 258.

The ingredients have been combined according to the recipe and poured into the refrigerator trays or molds.

The accompanying photo shows two of these refrigerator trays. They are metal, rectangular, and shallow. 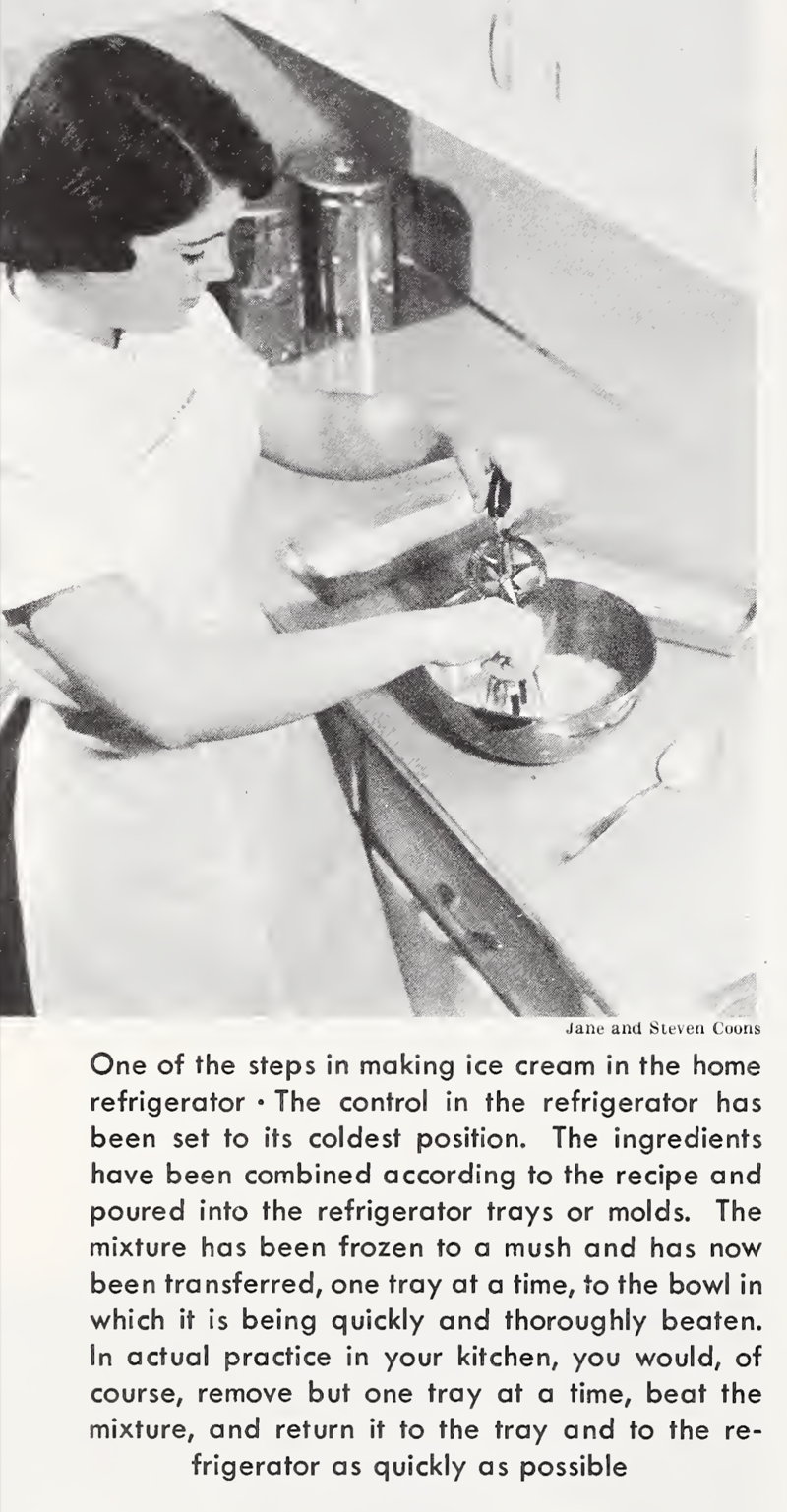 You can also see refrigerator trays used for desserts in this 1951 commercial for a Westinghouse refrigerator.

By at least the late 1960s, authors had begun to use the term “ice cube tray” in recipes for ice creams made in the refrigerator. In Vincent and Mary Price’s 1965 A Treasury of Great Recipes, there is a recipe for Tre Scalini’s Hazelnut Ice Cream on page 93 that says to “Pour into 2 ice-cube trays and freeze. This makes a soft ice cream.”

Borden’s The Dessert Lovers’ Hand Book from 1969 also contains recipes for making ice creams in the home refrigerator. The accompanying illustration shows the same shallow, rectangular container, but in this case calls it an “ice cube tray”—despite there being no cube shapes in that container as drawn. The ice cube grid has been removed. 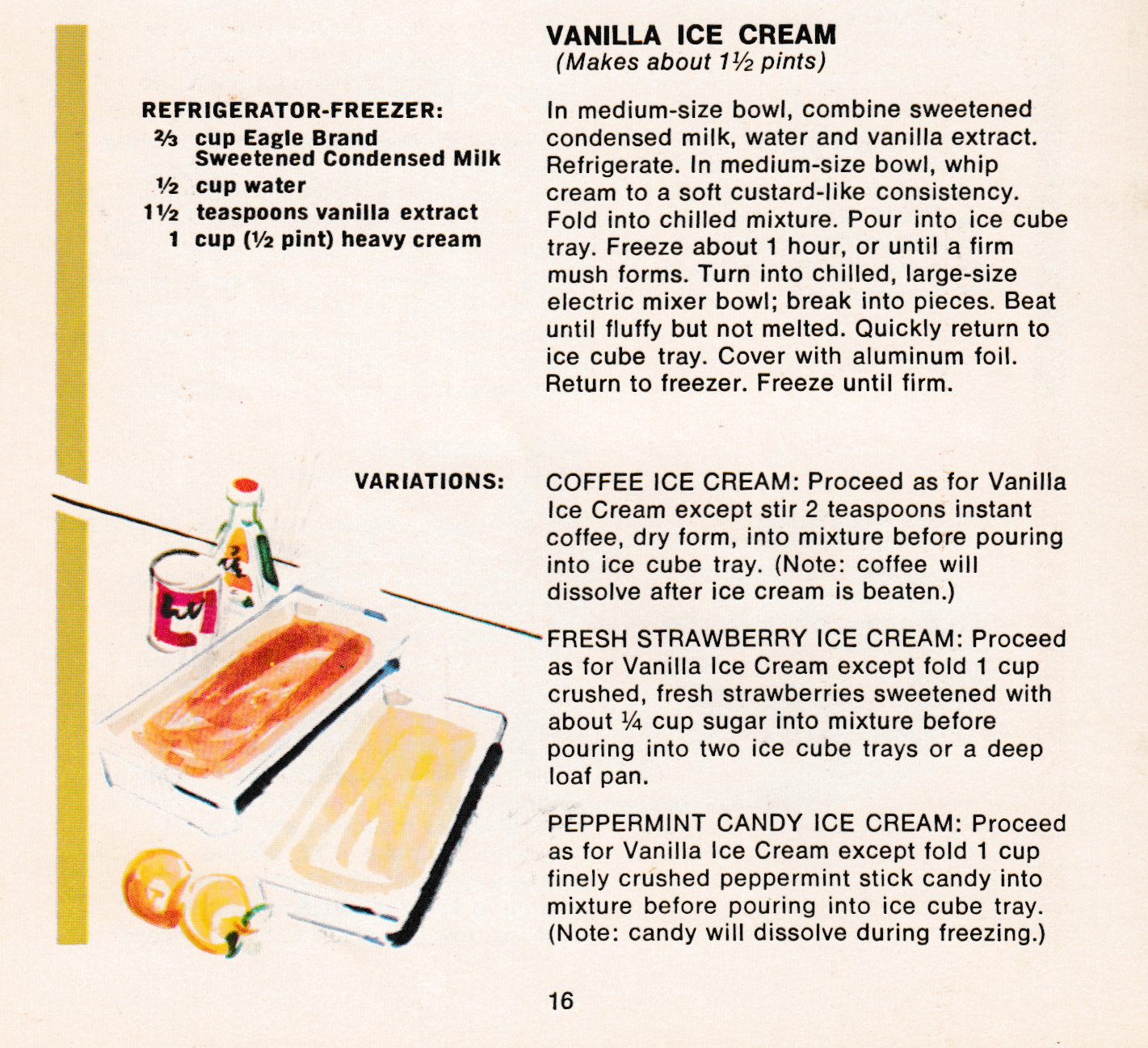 Borden’s 1952 Borden’s Eagle Brand 70 Magic Recipes uses the term “freezer tray” for the same Vanilla Ice Cream recipe that their 1969 Dessert Lovers’ Hand Book contains. The recipe is the same; only the terminology has changed.

One patent for a refrigerator tray with removable grids for ice cubes is Richard E. Kaufmann’s patent 2,112,027 filed October 3, 1936, found in the Official Gazette of the United States Patent Office Volume 488. The patent is labeled “Refrigerator Tray” and shows a “removable grid for ice cube trays”. 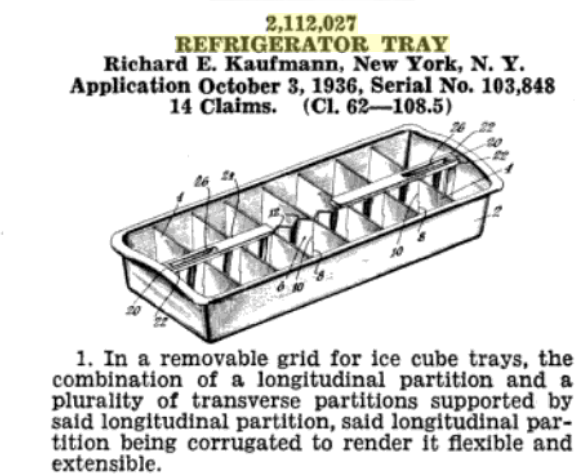 A slightly earlier patent, Louis Brownstein’s patent 2,037,364 from March 17, 1934, is labeled “Ice Cube Tray”, but specifically mentions its use for desserts:

My invention further contemplates the provision of a freezing tray from which the grid partitions and other parts may be readily removed for purposes of cleaning or when the tray is to be used without its partitions, as when it is desired to freeze desserts, etc. in the tray.

Brownstein writes specifically that the grid-less tray may “be used for freezing liquid desserts in one mass”.

You can see ice cube trays with removable dividers in this 1954 commercial for a Crosley Super Shelvador.

Here’s an example of a later iteration of an ice cube tray with a removable divider, a double-sized Quickube from a Frigidaire refrigerator: 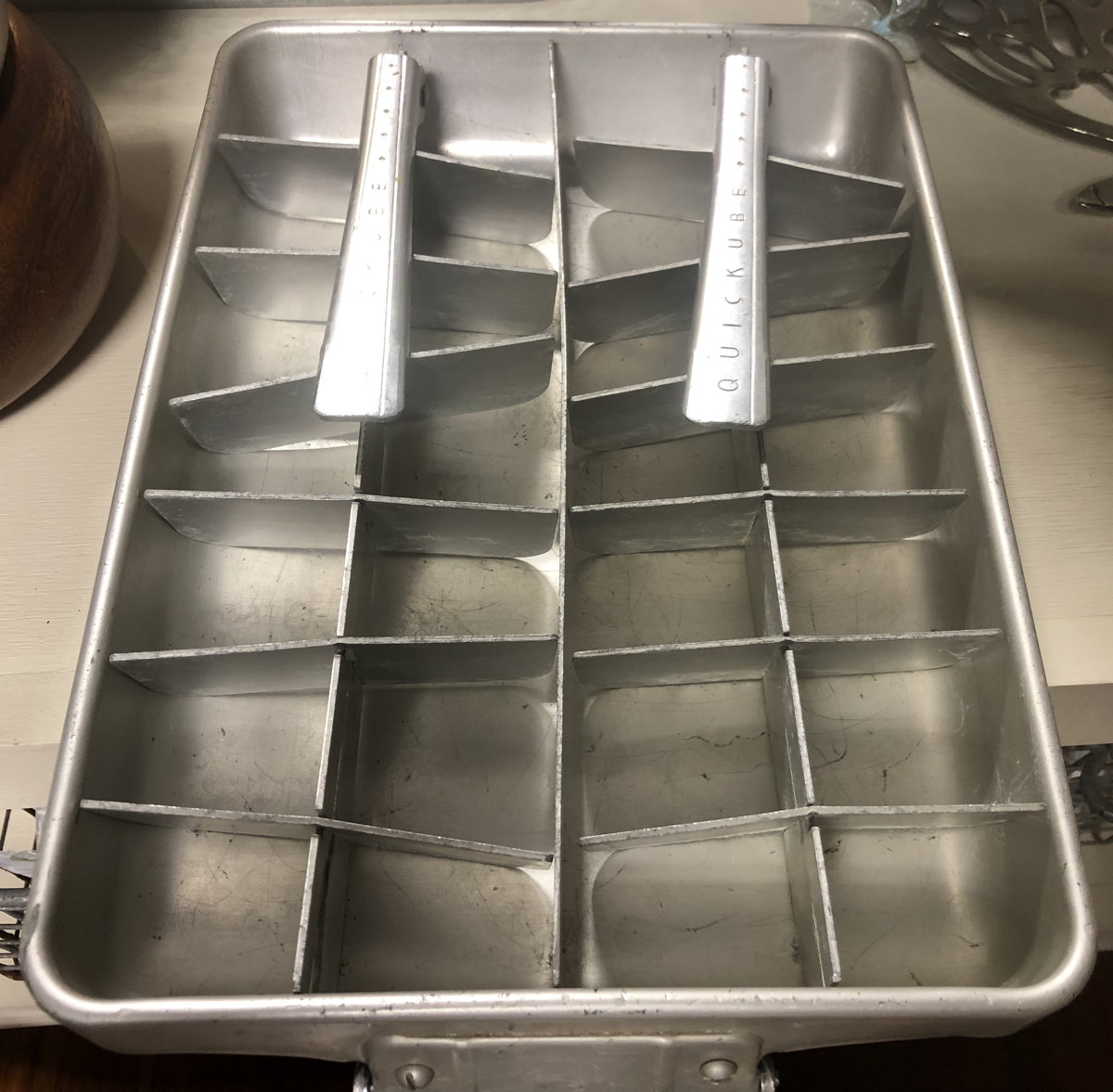 Fridges circa that era didn't have a dedicated freezer compartment, instead they had a section in the main compartment, where you could utilize those trays, in or under. This Google search should give a better idea. These trays were used for ice, for which we have a modern resemblances.

With the recipe I think they mean that you don't have to empty your freezer section, simply putting a tray under it should be enough.

Not the answer you're looking for? Browse other questions tagged freezing refrigerator language vintage-cooking or ask your own question.

3
How can I get frozen egg whites out of the ice tray?
10
How can I chill ice coffee quickly?
6
Is the rapid ice bath chill post-sous vide actually necessary when putting the meat/fish in the freezer?
31
What should I use for old recipes that call for 'buttermilk'?
0
Is it healthy for no frost fridge to have water in ice cube forms?
2
What is a stem pan?
1
What could cause ice pops (popsicles) to go soft in the freezer?
6
What is a “small cup” in Australia and/or old recipes?
32
Can my freezer be too cold?