What equation should I use for microwaving food?

Prepackaged microwave food typically says to microwave on high for n seconds. It usually says that the instructions are meant for an 1100 watt microwave (give or take).

My microwave is only 950 watts.

The same equation, because the power or wattage between both your microwave and the reference/recipe microwave are close enough that your formula would be a decent estimate of time with some "tolerable" error (and will work for any case this happens).

Technically speaking this means you just estimated cooking time by thinking it would behave linearly when the power between microwaves isn't that different, which is a decent estimate with some error (but also not really true and mistaken for whenever this doesn't happen).

For your specific case (owning a 950W microwave and having 1100W instructions) even though mathematically speaking an 86% difference (950/1100*100) in wattage seems like much, when you take into any consideration the available data like this one (source) 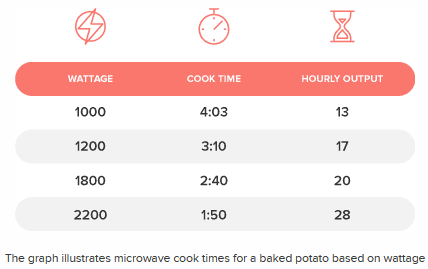 Notice that you can literally validate your formula by checking the data. So if for example you have a 1000W and you have a recipe with 3.10 minutes of cooking time tested with 1200W microwave, your formula estimates the cooking time to be 3.10*1.2=3.72 minutes, but the actual time in the table implies you're off because the real time is 4.03 minutes. So like I said before, decent estimate with tolerable error.

However, in reality cooking time in a microwave behaves non-linearly and thus, whenever the difference of wattage gets larger your formula doesn't work.

To give a formula for that case is harder when you realize the amount of variables to take into account, so this is why tables like the one above exist to give you some perspective of the cooking times. One would think that the table above solves the whole problem, but realize that those are cooking times for a specific food (baked potato); so if you have a food with no data I'd say experimentation is advisable at your own risk :D.

PS: I'm a mathematical engineer who likes cooking and just wanted to provide another perspective on the matter. Hope it helps!

In general, microwave meals are designed to be cooked to a safe temperature throughout, even when a microwave barely puts out the rated power, and that unevenly. This means the meals are designed to handle overcooking. Anyway power ratings are fairly inaccurate as they depend on how well the microwave radiation couples into the food - ratings are based around a defined portion though, so a ready meal isn't as likely to be poorly heated as something smaller.

So one simple approach is to follow the instructions for the highest power stated. This will work well for some things.

You can't assume you can just reduce the time in the same ratio the power is increased, because heat conduction is needed to cook the middle. This is particularly true if starting from frozen, or if it's something you can't stir.

Crucially though, this is what I've concluded after trying it - stopping when stuff is bubbling, and checking it's hot through.

If the instructions are for a higher power than you have available, start by following them, then check. It may actually be hot enough but if not, give it a little longer, in the same increments as above (which are only a suggestion). You may find that you consistently need to add the same extra time for the meals you eat, once you've tested

Not the answer you're looking for? Browse other questions tagged cooking-time microwave or ask your own question.

24
Does microwaving destroy nutrients in food?
11
How do I adjust cooking time for an under-powered microwave?
3
How can food cooked 1-2 hours ago be effectively reheated in a microwave?
1
Saved-for-later then reheated potato mixture sparks and catches fire in microwave
0
How do I translate microwave cooking instructions to fanless conventional oven instructions?
0
Microwaving M&Ms produces sparks
3
Why is my microwave popcorn burned and undercooked at the same time?
1
How to make microwaved porridge thicker
0
What are some effective tips for cooking bacon in the microwave?
7
How can I thicken/firm up this caramel?