Are these both ways okay to lower the flame in these types of gas stoves?

Before asking this question, I really tried to find an answer online, but I failed. Basically, we mostly have manual igniting gas stoves. If you press and turn the button on left (90 degree) and use a lighter/matchbox, it gets turned on. To lower the flame, you just turn it further a bit on left.

But my mom has always warned me to not to turn it so left that it becomes 180 degrees. I wonder what happens after that. Further, my mon never told me what happens when you keep the button between 0 degree and 90 degrees. I feel it should also lower the flame just like when the button is between 90 degree and 180 degree (i.e., turned to very left). Because I don't see any point in the design of a button that goes from 0 degree to straight 90 degree and between them you are not supposed to get anything. And you're not supposed to do this to lower the flame. I feel there can be a reason for it but I don't know if that's right or wrong.

I'm not sure of any these things and I can't even experiment as it's dangerous stuff.

I really felt frustrated when I googled this and I saw results like:

But I don't have any problem with my gas stove. I got really tired of all these. Neither I could find a video on YouTube.

Even when I visited New Delhi, which is a big city than my hometown, I found same settings, but I didn't ask them how to operate, because everyone knew same things which I knew. So I felt they will also don't know what happens between the 0 degree and 90 degree. 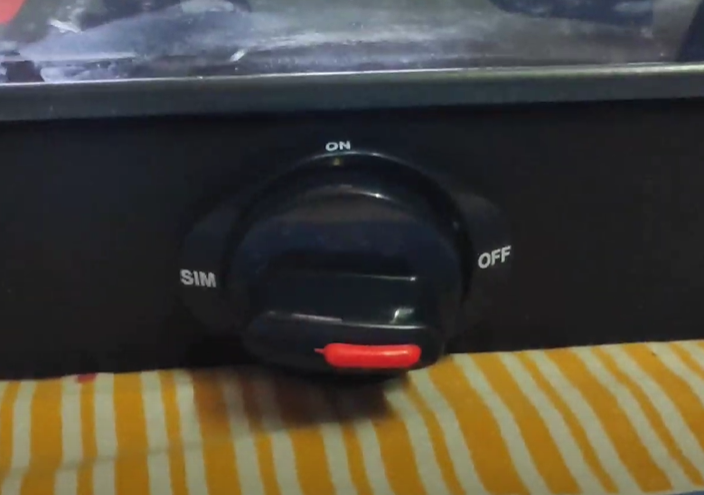 Here is a user guide, which exactly explains how to operate, except the problems and doubts I have: 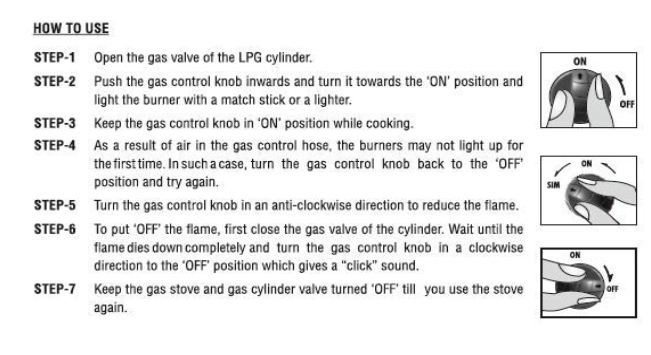 Now, I don't know if you're familiar with these or not and there may be differences between western and Indian stoves, so that's why I've tried to provide enough details and images and links. Hope you'll understand my doubts.

So, are the following ways correct to adjust the flame?

If no, what would be the reason for it? (Asking this because I really can't believe this fact. I feel it would be a bad design. A new user is very likely to keep the button between 0 degree and 90 degree because there's generally no warning/alarm for it unless someone tells you not to do it)

I don't know exactly which type of valve they are using, but they all pretty much work the same.

You seem to be imagining the gas flow curve to look like this:

I've seen them designed several ways, but this is a simplified visual representation of a valve:

Lighting the flame at 100% is necessary because it maximizes the area with the correct air/fuel mix to more easily initiate the flame. Once lit the flame will maintain a horizon where the air/fuel mix is correct automatically as you change the fuel pressure.

From the 90° position, turning the dial clockwise will cause the flame to abruptly turn off at some point, then the remaining rotation is used to tighten the valve so no gas leaks from the valve.

So yes, the gas flow will reduce the size of the flame as you close the valve, but it's very difficult to control the flame level on that side. The actual curve of gas flow looks more like this:

Not the answer you're looking for? Browse other questions tagged stove gas indian-cuisine or ask your own question.

11
Is it worth to install a gas stove with a big gas bottle in the kitchen?
26
Induction range vs gas
14
What are some of the benefits of electric stoves versus gas stoves?
10
Does turning a gas stove on high move the heat to the outside of the pot?
7
Why does my Wonder Pot now bake unevenly?
2
Why is there a noise and big flame when starting my gas cooker?
1
Gas leak (and flames) around burner intake
8
Are gas stoves preferred in a commercial kitchen due to having a constant heat source
4
Is it safe to lower the gas on a dual ring burner so that only the inner ring is lit?