Cheese soufflé with bread cubes instead of egg whites

In this video: Cheese Soufflé that NEVER Falls! - Chef Jean-Pierre, Chef Jean Pierre proposes an interesting method for making cheese soufflé; instead of folding in beaten egg whites to his custard, he uses diced bread cubes (with crust removed) to provide the air that will make the soufflé rise.

His reasoning for using bread is that the soufflé will not fall (only slightly) and could thus be fully cooked in advance (hence making a foolproof recipe for beginner cooks).

This method relies on 2 key aspects:

Could someone explain from a chemistry perspective why 1) and 2) occur?

For 2), my guess is the broken down bread provides better structural integrity than egg whites, though I am not sure why.

There is nothing to explain here - the claim is simply wrong.

You can certainly put bread in custard and subject it to heat. It is traditionally done in French toast, for example. I could even buy that under some circumstances, you won't notice that you are chewing on what used to be bread - the inside of a French toast is quite soft, and if you don't know what it is, you might not recognize it.

But first, I don't believe that the bread in this recipe will disintegrate fully to the point where it is completely mixed with the custard. (And if it did, it wouldn't turn "into flour"). You can see in the video how, before sticking it into the oven, the bread cubes swim on the surface, even after he purposefully wets them on top at around 10:20. And after he takes it out, the surface is rather uneven with a few lumps, and while he does have cubed shallots and dried tomatoes in there, the shapes look awfully like bread cubes - see for example the closeup at 11:50. 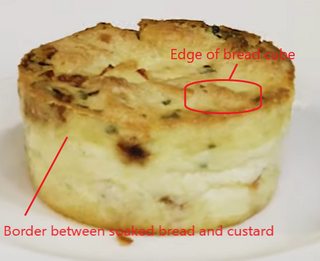 You could, in theory, mix the bread fully. For that, you would have to wait until it is soaked well, and then physically mix it, with a fork or with the blender he praises so much. But in the video, it is implied that no such mixing happens.

The second claim is that the souffles don't fall. This is entirely wrong. When he puts the souffles in there, the ramekins are filled "all the way to the top" (quote from 10:28). When he takes them out, they are risen slightly, I'd say less than two centimeters - you can see a good shot at 11:19. That's expected, since there are no egg whites to rise during baking. And then, while he plates them, they fall back to the rim of the ramekin. He even mentions it at 11:29

Don't be fooled by the "little bit" - if you remember, they were filled to the rim when they went to the oven.

So, even in his own video, you can see that the soufflés cannot hold any of the expansion they got in the oven, and fall to their original size once they cool. This is exactly how any soufflé behaves, with bread or otherwise.

It looks more like a fluffy bread pudding (or even a quiche) instead of a soufflé.

There is no chemistry involved; the bread just adds (little) more structure.

At 10:06 you see the uncooked mixture near the rim of the ramequins.

At 11:28, you see the soufflé has deflated nearly to the rim of the ramequins

Not the answer you're looking for? Browse other questions tagged chemistry souffle or ask your own question.

14
Why do people recommend cream of tartar when whipping egg whites to the exclusion of all other acids?
11
What happens with bread at >= 94˚C/201˚F? Or: Is temperature a reliable indicator of doneness?
3
Is it possible to make souffles that rise without beating egg whites?
32
Can one bake a cake with a cooked egg instead of a raw one?
4
Why does beating egg whites with cold water increase the volume of incorporated air
6
How do egg whites help to keep fats inside a cake?