Can I use Yakult as a yogurt starter?

I'm wondering if we can use Yakult as a yogurt starter to obtain drinkable yogurt?

Update: Yes, it is possible.

After a note in the comments, I tried researching and had to go no further than Wikipedia to see how it is done commercially: The incubation happens in the presence of glucose and continues for 7-8 days. I checked their source too, an article in an encyclopedia on food technology, and the information was correctly transcribed.

I decided to try it out. As I didn't have glucose, I poured in a random amount of agave syrup (a mixture of glucose and fructose). Indeed, at 8 hours (my standard incubation time for Lactobacillicus Bulgaricus yogurt) it was still completely liquid. But after 24 hours, it started looking good, and now, at hour 36, it has firmed up as normal yogurt.

The Shirota yogurt turned out to be quite interesting.

It looks like normal yogurt, with a small layer of whey on top, which looks somehow different from typical yogurt whey. The top slightly-fatty layer that builds on top of other yogurt is on top of the liquid layer and not below it. The colour is very slightly off-white, but nowhere near as orange as Yakult drinks.

The yogurt tastes differently from standard yogurt. It has a fruity smell, and is more sweet than sour, with bitter notes mixed in. I didn't notice acetic acid smells, the sourness must be predominantly lactic acid. The smell is rather subtle. The texture is unremarkable, just like standard Lactobacillicus yogurt.

At first, I was afraid that the long incubation time and the need for dextrose might mean that L. Shirota is difficult to grow, and might not work well under not-so-precisely controlled conditions, producing spoiled milk instead of yogurt. Now, having smelled the yogurt, I am pretty sure that there is a lot of the original Shirota culture growing there. My new hypothesis is that they need long growth times to achieve a very high concentration, so they can dilute it to make the drink and still get a strong taste. 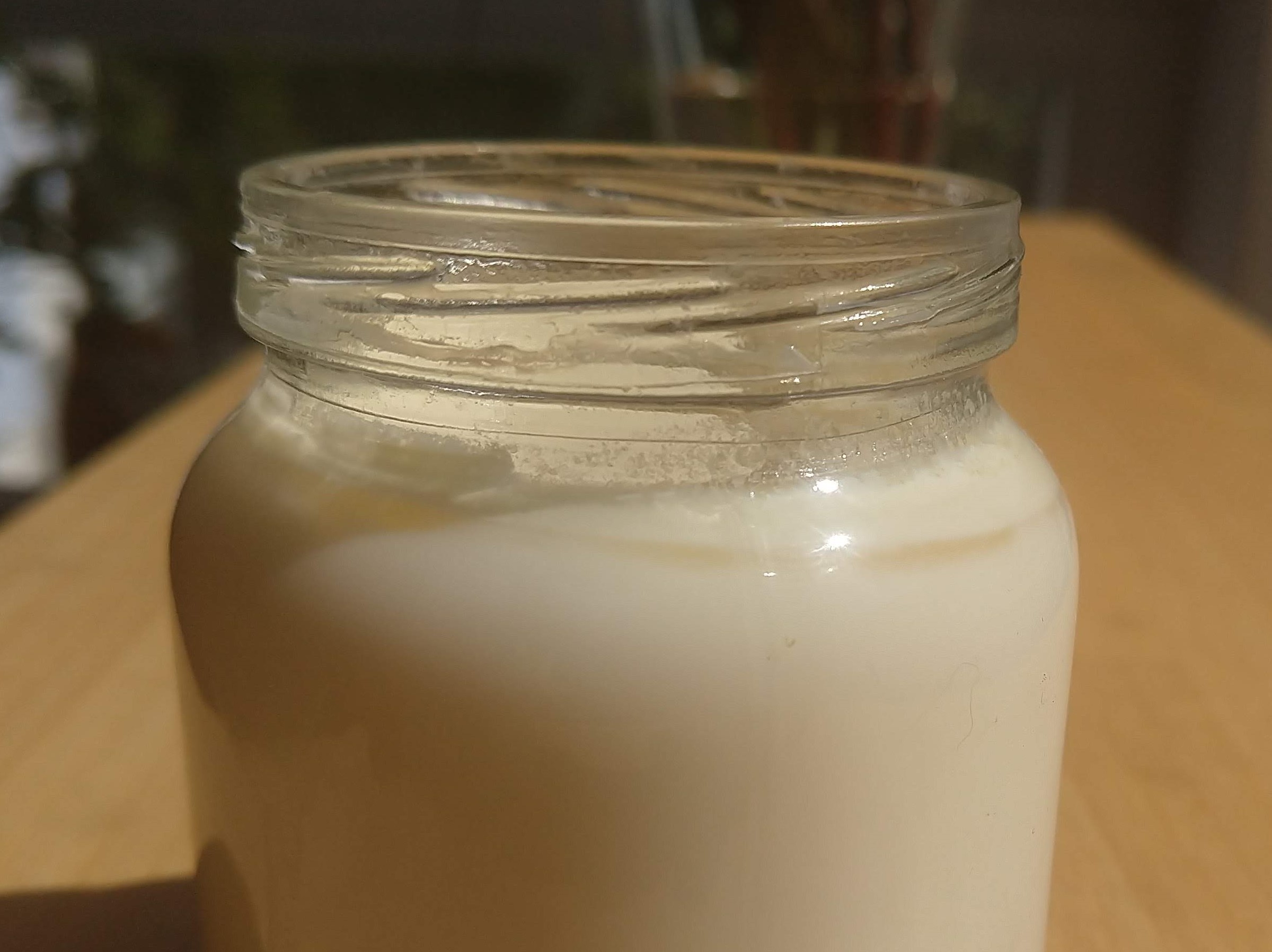 I left the yogurt to incubate somewhat longer than a week. I was not happy with the result.

Some of the glasses got a band of light-reddish colour, reminiscent of commercial Yakult but slightly paler, while others got no such band. Those who had it had the band in the top third of the glass, but it was not the top layer.

The yogurt smelled quite sour. I tasted just a little bit, the taste was sour, but not as much as over fermented L. Bulgaricus yogurt. I didn't smell much acetic acid if any. There was a bit of sweetness in the taste, but no more than at the beginning, it felt. The Shirota-typical smell was subtle, not much stronger than at 36 hours.

After some more resarch, L. Shirota is sensitive to the absence of certain nutrients, mostly aminoacids and vitamins. See https://doi.org/10.1016/j.lwt.2019.108735 for details. But note that even without nutrients, they reached a good (for typical yogurt, not for yakult) concentration after 31 hours.

You can use most yogurts as a starter, no matter the brand. The only requirement is that they contain live culture, and all the ones marketed as a probiotic should have it.

It should give you normal yogurt, not a yogurt drink. You will have to follow a recipe for a yogurt-based drink if you want it liquid - just water and sugar to taste should do, of you want to mimic Yakult, or you can branch or into more interesting stuff.

Not the answer you're looking for? Browse other questions tagged fermentation yogurt or ask your own question.

2
How can I know when my yogurt is ready (in a generic, basic, non-us yogurt maker)?
6
I'm trying to make yogurt, but it won't turn out. Can someone help?
10
Home-make yogurt: add sugar / something else with the starter?
20
How to make yogurt without any existing yogurt
4
Making drinkable yogurt
1
Homemade yogurt
2
Do you need more yogurt starter for more milk?
17
Why is it recommended to mix yogurt starter with a small amount of milk before adding to the entire batch?
3
How can I make a yogurt starter culture from scratch?
20
Why is DIY yogurt not as stable as sourdough starter?