Why should entrecôte meat apparently be cut into slices before served?

Recently, I went crazy and bought an entrecôte -- a very premium cut of beef to me. Over $11 USD for one. It was heavenly. I nearly cried when it was all gone from the plate.

The instructions said to put it out from the fridge for 30 minutes before frying it, which I did. While in the grill pan, it caused so much fat to melt into it that it quickly started "boiling" in its own fat rather than frying, so I had to repeatedly take the meat out from the pan and put it on a plate while pouring away all the liquid fat from the pan into a container. I repeated this many, many times before it finally looked done. The instructions said nothing about this, but maybe they consider it "obvious". If I had just left it in the pan, it would've been "caramelized" rather than fried/grilled. A lump of coal!

Anyway, once done, the instructions said to let it rest on the plate for two minutes before slicing it up into slices and then serving.

My question is: while I understand the need to wait for it to cool down, and possibly "set" (not sure if that's the right term) outside of the frying pan before serving, why do they tell you to slice the whole thing into slices? I actually didn't follow that last advice, but instead just kept cutting pieces from it as I ate. (As I've always eaten meat of any kind, including in any restaurant I've ever been to.)

This time (yes, I couldn't help myself from buying another one!), I'm going to try to cut it into slices as instructed, before eating, after waiting the two minutes. Unless you all can tell me a good reason not to, that is. Does it make the meat taste better? If so, why?

To directly answer your question - you slice it for presentation.

Entrecôte should be cooked at as high a temperature as you can achieve. This will tend towards charring the outside before the inside is cooked. As you should serve it towards medium rather than rare because of the fat content, you want to avoid over-cooking by doing it too slowly.

Once it hits your pan or grill, it should really only need a couple of minutes each side; this should be fast enough that it doesn't swamp your pan before each side is done.
After that, you either leave it to rest for at least 10 minutes, or place in a slow oven, depending on thickness. This is to allow the temperature to equalise & finish cooking the inside.

Because it is heavily charred on the outside, for presentation you slice to present the tender inside as it's served. 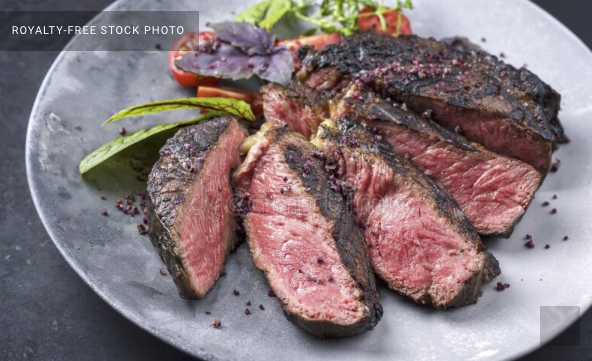 Image is waygu, but best I could find royalty-free. - https://www.dreamstime.com/modern-style-barbecue-dry-aged-wagyu-entrecote-beef-steak-lettuce-tomatoes-offered-as-close-up-design-plate-image194816166

One point is presentation as has already been covered by another answer.

Another is to cut the muscle fibers shorter if possible. Muscle fibers are generally tough, and so if you cut them into shorter parts the meat will feel more tender to chew. A premium piece of steak will already have the fibers short, ie. along the shortest dimension like so |||||||||||||| (sideview) or maybe slightly slanted like so ////////// (sideview), but you can still cut them even shorter by cutting at an angle like so \ \ \ \ (sideview). Search for "how to cut meat against the grain" for more information or look here for an example using flank steak where it is pretty much essential to cut against the grain: https://www.thekitchn.com/heres-exactly-how-to-slice-meat-against-the-grain-and-why-you-should-be-doing-it-meat-basics-215798

Not the answer you're looking for? Browse other questions tagged meat frying grilling or ask your own question.

1
How to tell if stir fry lamb is done?
9
Telling if small pieces of meat are cooked - blind or colour blind chef
2
Technique for shaping meat for cordon blue (alike)
12
When coating raw meat with flour, does leaving it for a period of time make the flour 'disappear'?
5
How to make perfect crispy bacon strips?
1
How to store cut potatoes for the morning?
0
Can lamb chops be light fried\sauteed to fully done and how long does it take?
0
Details of pre-cooking chicken before shallow-frying?